Starting July 1, 2017, the City of San Francisco will start doing something it hasn’t done since the 1970s: take responsibility for all the trees in the public right-of-way. San Francisco cut funding to urban forestry in the late 1970s, resulting in a handoff of responsibility to adjacent property owners for two thirds of the city’s street trees (the City continued to maintain one third of the street trees, mostly on main thoroughfares.)

As a result of this shift, homeowners were abruptly made responsible for planting, watering, pruning, and caring for street trees, as well as repairing tree root-related sidewalk damage at their own expense. Despite the wholesale shift in responsibility for their care, the tree and the sidewalk did not become private property as part of this handoff. Municipal codes still governed where trees could be planted, how they must be cared for, and under what conditions they could be removed. As you might imagine, this situation – which continues to the present day – has caused a lot of confusion and tension between homeowners and City officials. Quality of tree care and sidewalk condition can vary wildly from street to street, house to house. 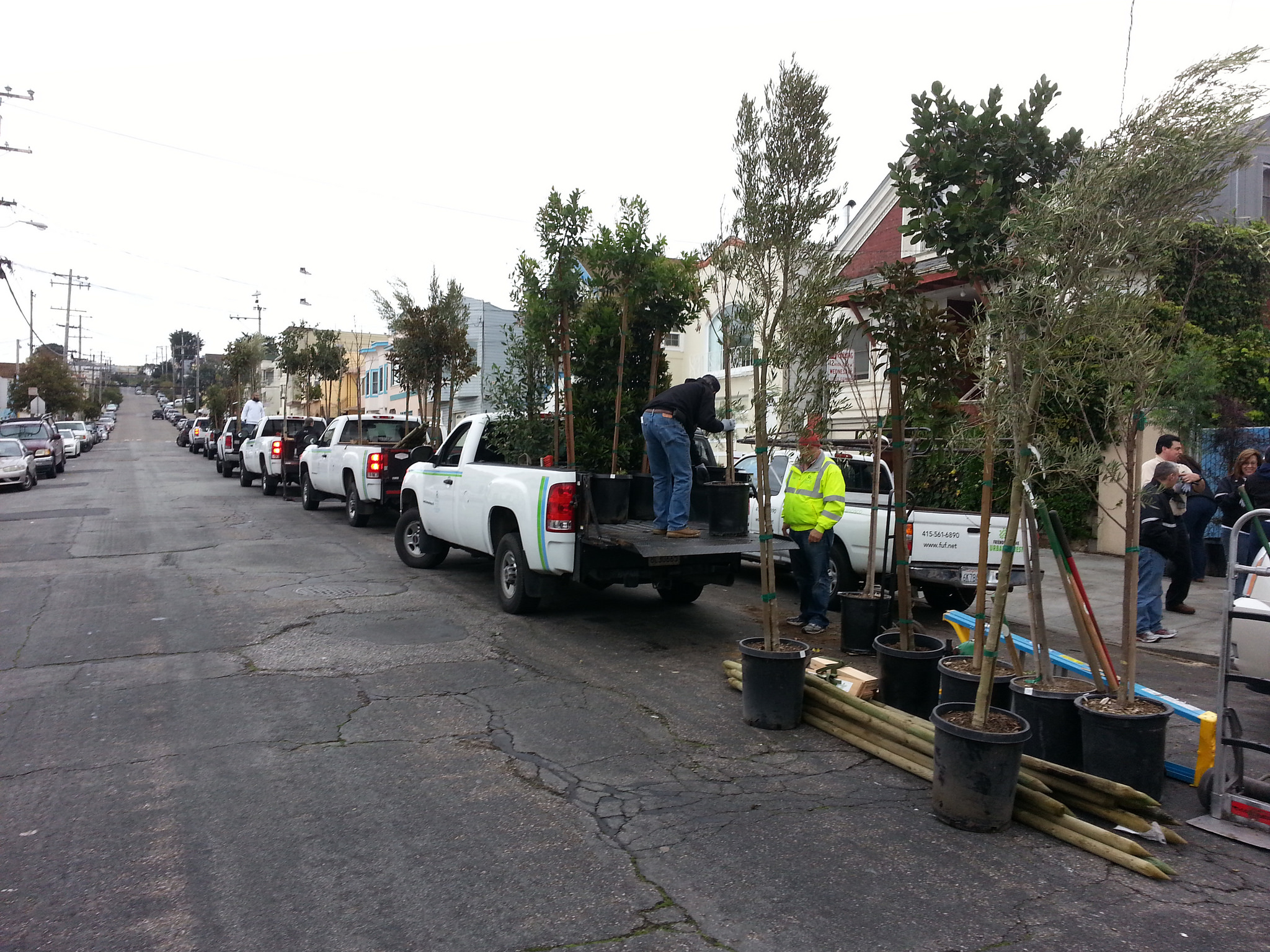 In 1981, nonprofit Friends of the Urban Forest (FUF) was formed to engage community members to plant sidewalk trees and agree to care for them on non-City maintained blocks. Since then, the organization has planted over 50,000 trees with the help of trained community volunteers. In the 1990s the organization also began offering young tree care, and now visits each tree at least four times in the five years after planting, also utilizing skilled volunteers.

In November 2016,San Francisco voters were asked to vote on a measure (Proposition E) where responsibility for maintaining trees and repairing sidewalks would return to the City, funded through a budget set-aside rather than a tax. FUF rallied voters to pass the measure and it did so with an overwhelming nearly 80 percent of voter support. The City’s fiscal year starts July 1st, 2017 and soon the rubber meets the road. How will this transfer of responsibility be accomplished? 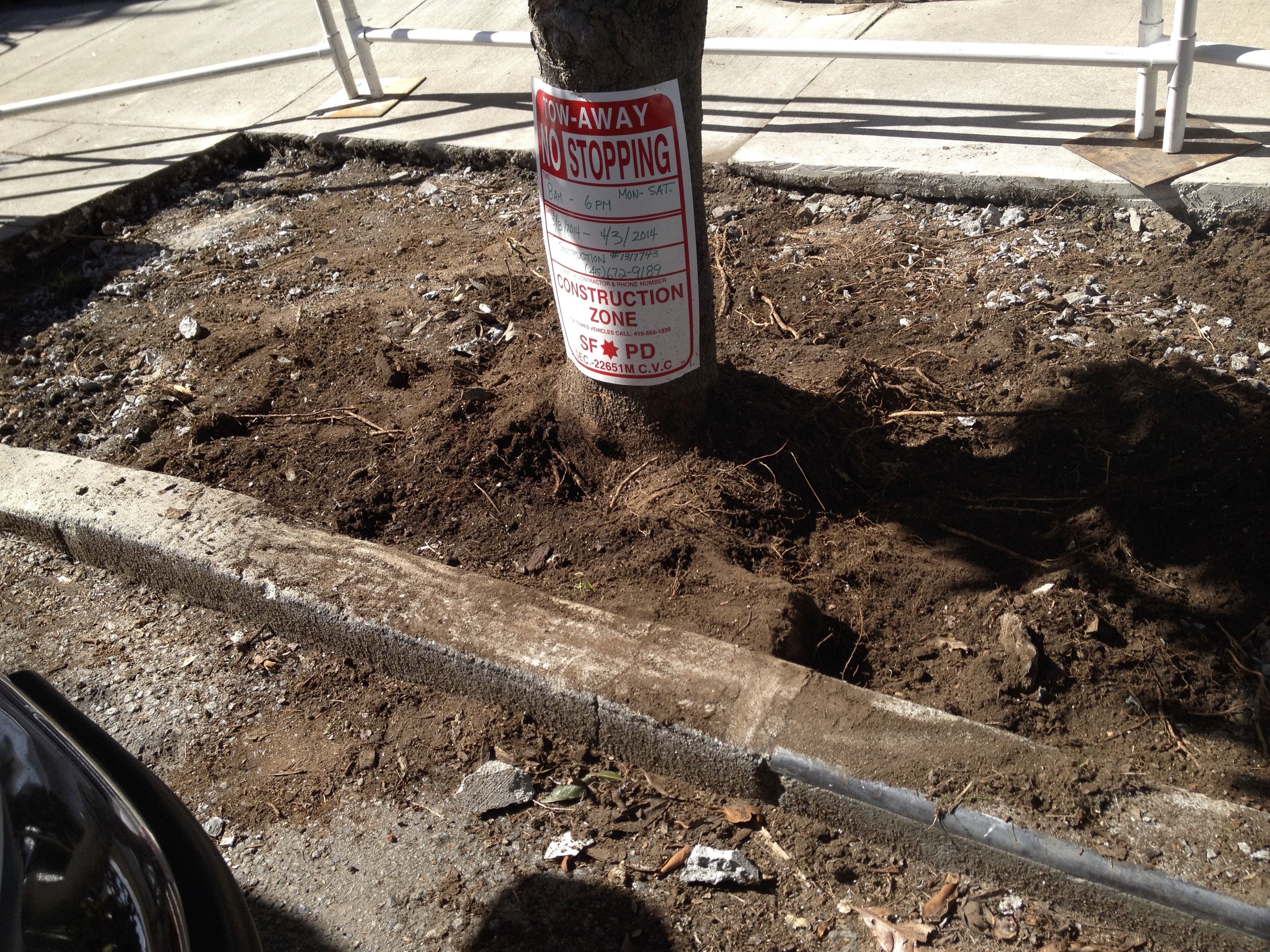 First priority, according to the City’s Department of Public Works (DPW), will be pruning trees to mitigate risk and repairing sidewalks most damaged by tree roots. Data from a newly completed tree census provides the necessary information to allow the city to prioritize the work. Addressing the most critical issues is expected to take several years, with routine tree pruning (most on a 3-to-5-year pruning cycle) beginning in 2019.

Meanwhile, FUF continue to perform community tree plantings and young tree care – with some differences. “We’re not going to have to ‘sell’ the benefits of planting trees to property owners anymore,” FUF Program Director Karla Nagy told me, referring to the current model where homeowners have to agree to care for a tree for its natural life after planting. As a result of the current model, FUF sometimes struggled to attain a critical mass of tree plantings in a given neighborhood. “Now [after July 1] we’ll contact everyone on the block and say, ‘We’re planting trees on your block! Come and help!’ It’s going to be a communal planting on an entire block, not individual property owners here and there. So in some neighborhoods we might get even more participation.” 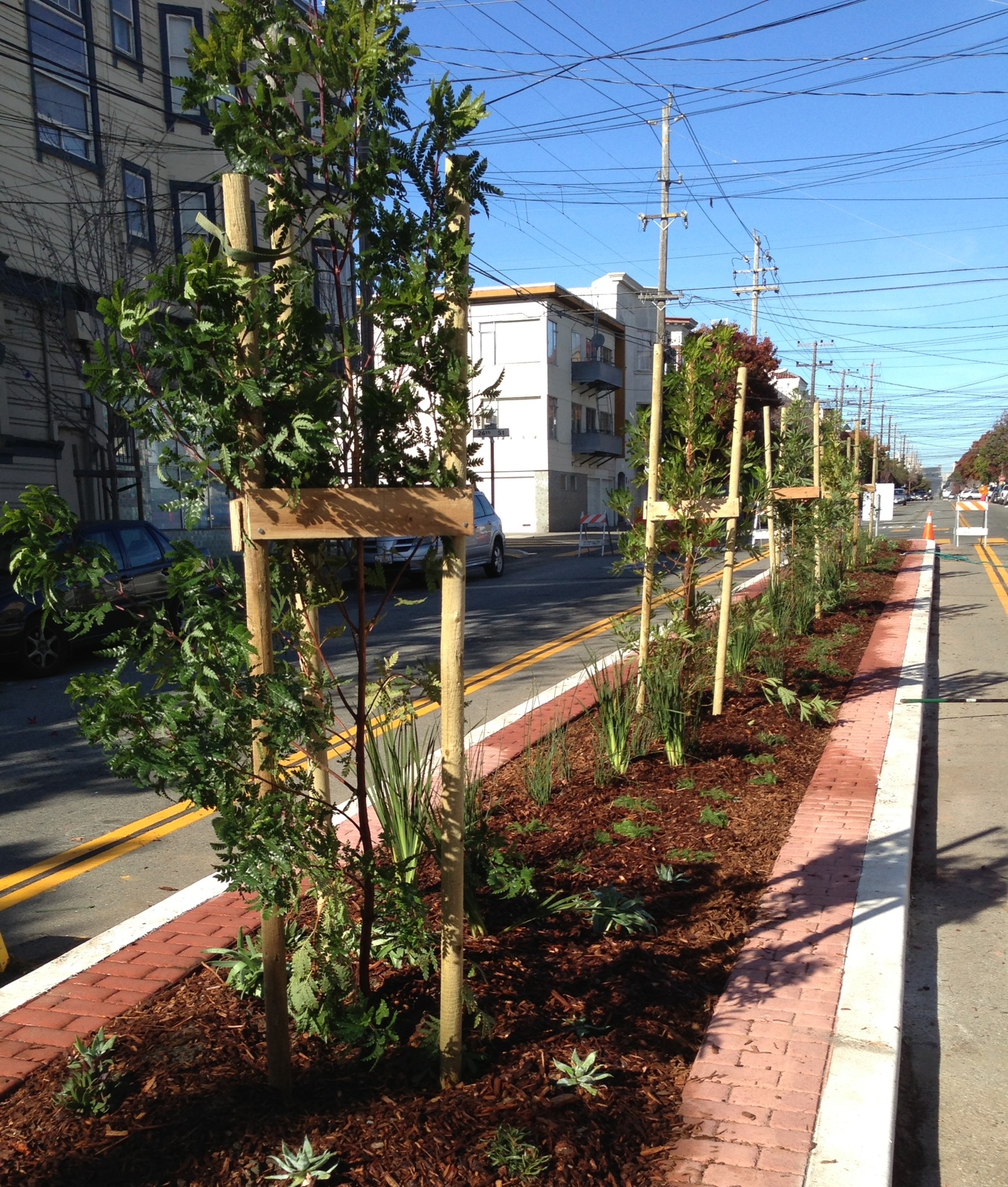 There will be challenges as the City and FUF develop an even closer working relationship. Both organizations maintain databases that run on different software and contain somewhat different information. There are disparate working styles as well. “FUF is a nonprofit that is flexible and adaptable and makes decisions relatively quickly,” says Nagy, “compared to a City department which takes a while to establish systems and processes… We are creating something totally new… It will be a work in progress probably for the next couple of years.”

Good communication with the public will be paramount. Nagy explained, “At FUF, we are working on developing a clear message: This is what we are doing, and this is how we are doing it. We’re going to plant trees. We’re working in this area. This is how you can get involved and the trees you can choose from.” DPW has created a “Prop E FAQ” to inform people about the upcoming change. 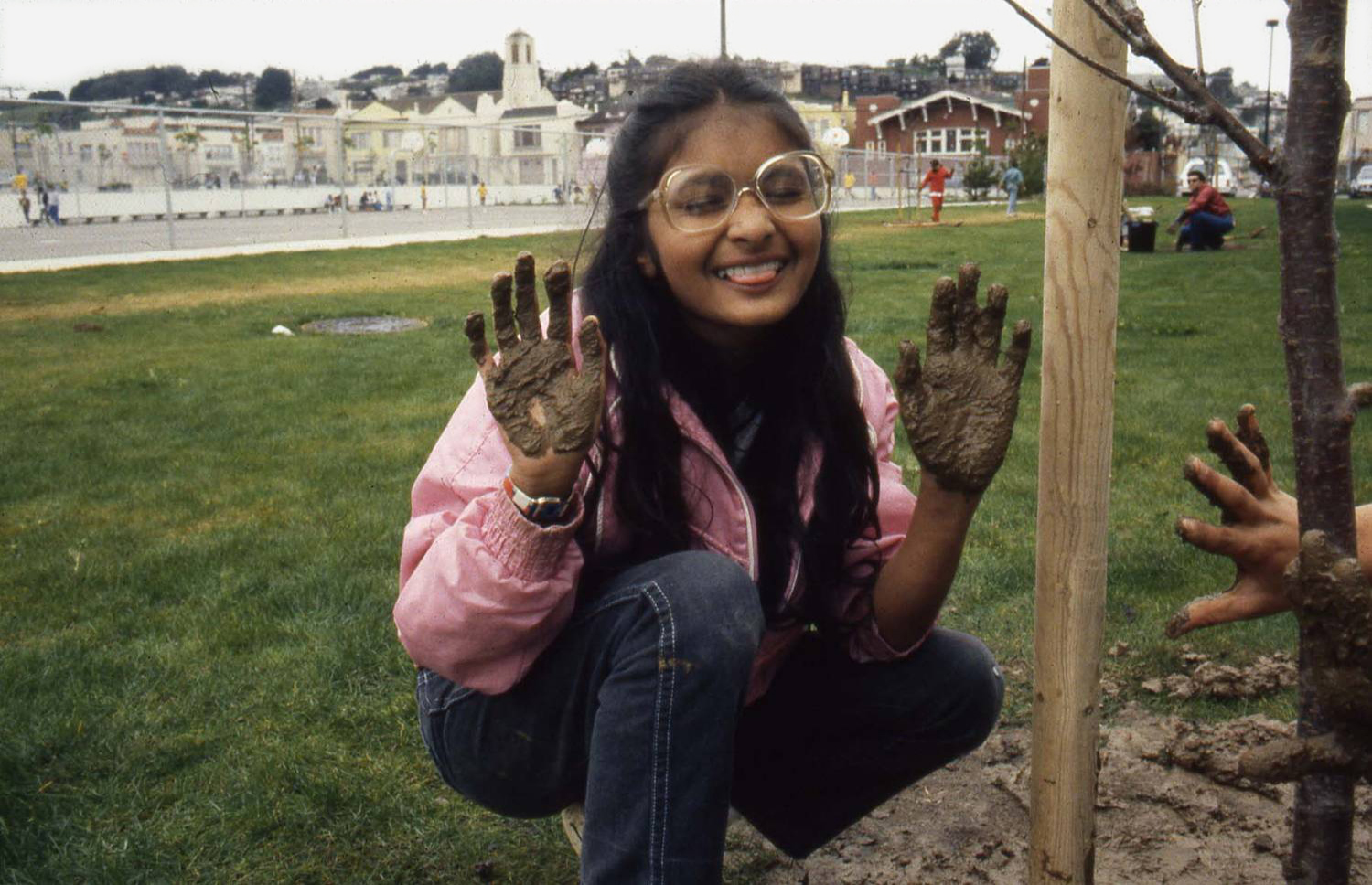 While most consider the transfer of responsibility for the street trees back to the city to be a good long-term decision, the urban forest still needs volunteers. Nagy: “We expect to plant between 1,700 to 2,000 trees over the next year… It’s been a long time since we planted those kinds of numbers (annual tree planting numbers were higher in the 1990s when FUF’s funding depended solely on tree planting)….We are going to need all the volunteers we ever had, and more.”

And there will still be private homeowners who prefer to opt out of the City system and plant and maintain their own trees as they have always done. There is, quite frankly, a healthy bit of skepticism among the citizenry whether the City will be able to keep up with the workload. But for those who have been watching all these years, the signs have been clear – much research and preparation has gone into this. 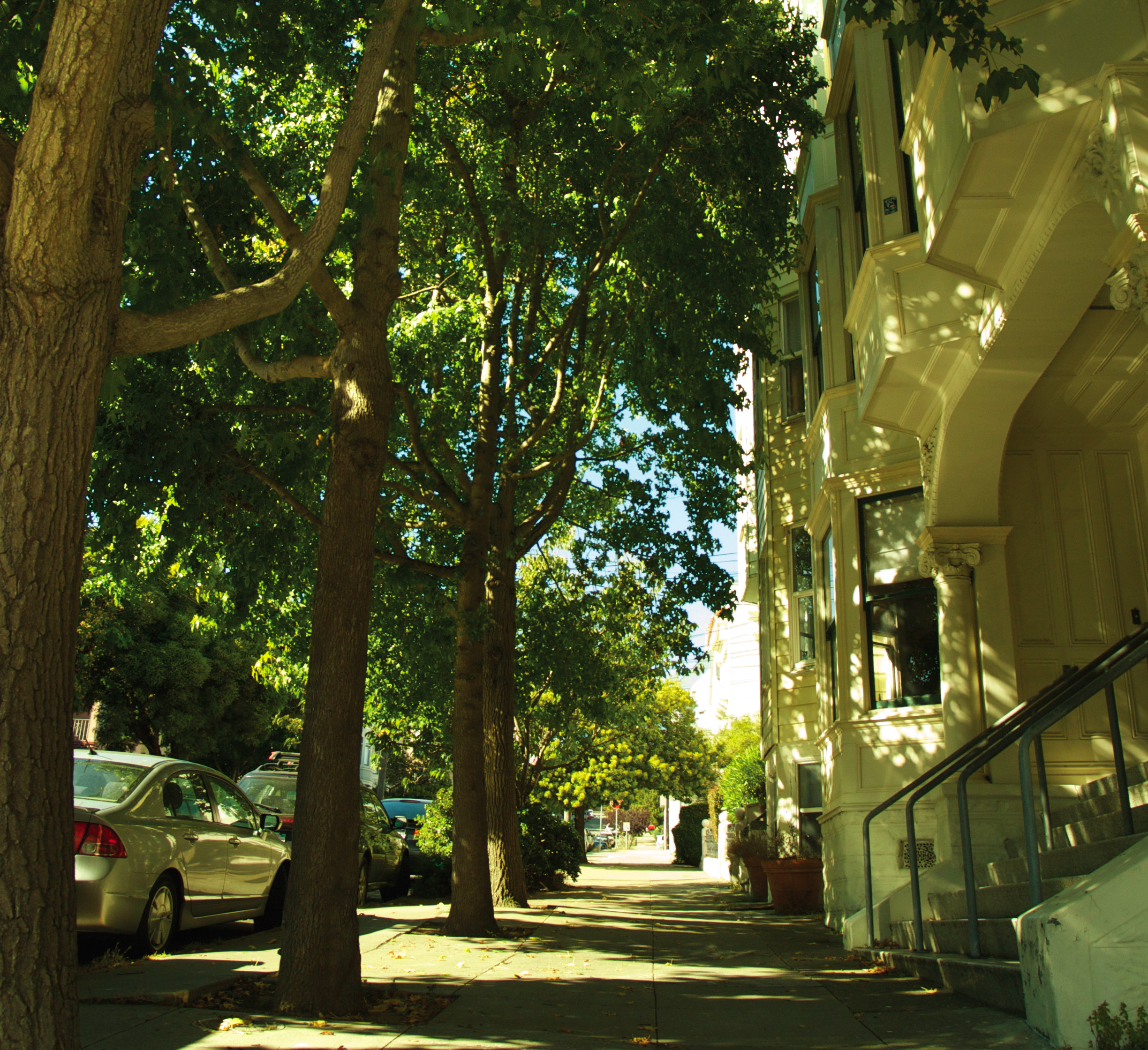 In 2014, the San Francisco Urban Forest Plan (Phase 1: Street Trees) was completed. In January 2016, the first citywide street tree census was begun, and completed this year. The data is plotted on the Urban Forest Map, the software for which was initiated over 8 years ago. Proposition E passed in November 2016.

Since the 1970s, the science of arboriculture has made many new discoveries, and its practitioners have become more knowledgeable and skilled. The time is right for a better-managed, longer-lived urban forest in San Francisco. We have the data, the infrastructure, and the people. It’s a seismic shift, but we’re used to that around here. 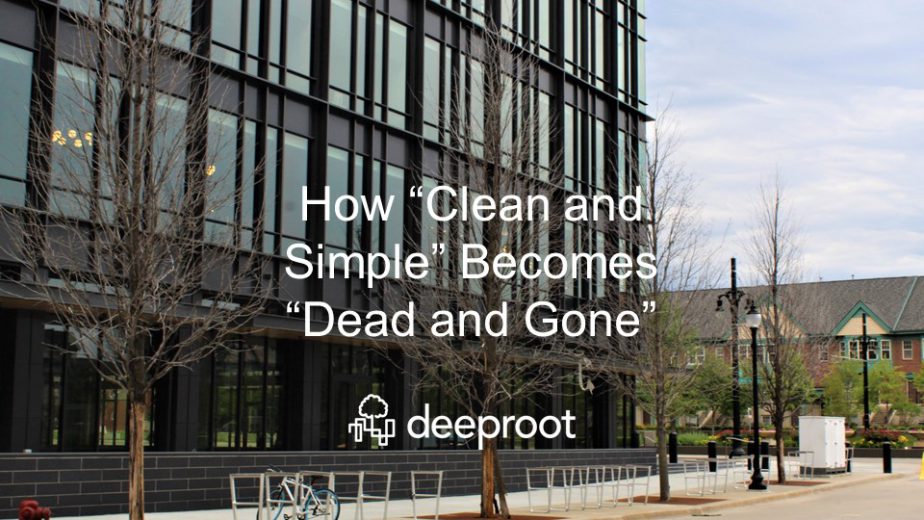