Historically, the best way to plan for future storms has been to look at the past. Significant effort has been put into to developing long-term rainfall records, and many of the most complex stormwater models are designed to run simulations that represent decades of rainfall data. But a changing climate means that storm patterns are changing, often in significant and unpredictable ways. So how does a stormwater management professional plan for future storms when the future is not predicted to follow past patterns?

Nationally, heavier than historic rain events have been observed to be increasing over the last 50 years. This varies geographically, from as low as 5% in the Southwest to over 70% in the Northeast (2014 National Climate Assessment). Between 2003 and 2016, the City of Seattle, WA estimated that the magnitude of the 100-year storm increased by between 20% and 40% (2016 SPU Combined Sewer Overflow Reduction Program: Precipitation Intensity, Duration, and Frequency Update (DRAFT)).

Additionally, there is a lot of uncertainty about the effects and magnitude of a warming causing rainfall predictions to vary dramatically depending on assumptions about warming trends. For example, in the Minnehaha Creek Watershed of Minneapolis, MN, the predicted increase in the 10-year storm varies from 10% to 150% depending on warming scenarios (2014, Community Adaptation Planning for Changing Landscapes & Climate).  In Colorado (where I live) projections vary so widely, even within a single model depending on inputs, that it is unclear if average precipitation will increase or decrease (2008, Climate Change in Colorado). 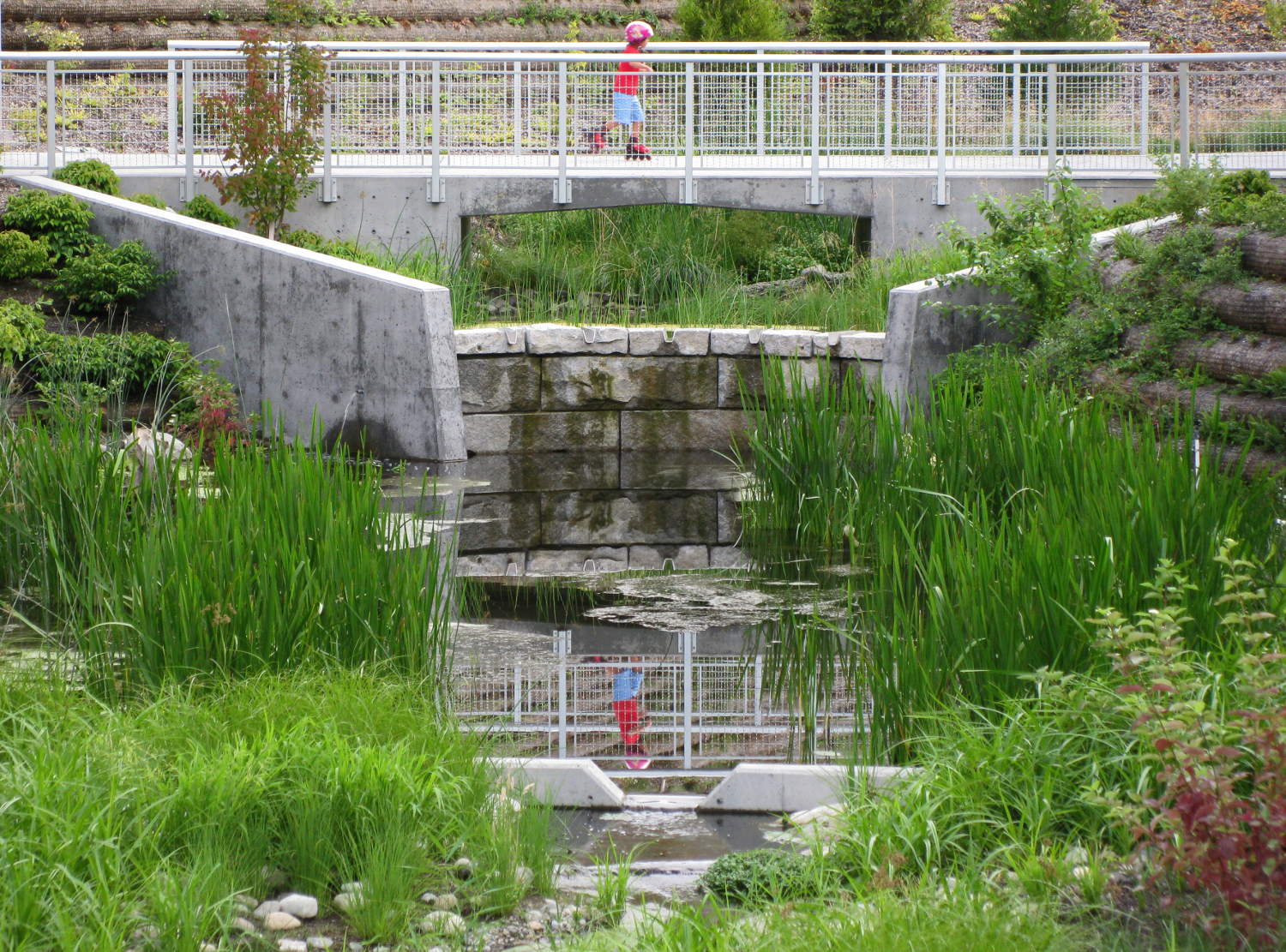 The good news is that while climate change is unpredictable, stormwater professionals are used to designing for uncertainty. Some of the same tools that are used to compensate for unknowns in land cover or flow regimes can also be used to adapt to climate change.

One approach is to armor our designs with conservatism and factors of safety. But these approaches come at a significant cost – not only in opportunity costs of funds that could be used for other civic infrastructure, but also the ecological costs of harvesting, processing, and transporting construction materials. Another approach, and one that is better suited to work with the unpredictability of climate change, is to develop a broad-level strategy and phase construction so that facilities are only built as needed. Low Impact Development (LID) solutions are ideal for this.

LID focuses on distributed facilities to manage stormwater at the source. An inherent benefit of this approach is that many LID Best Management Practices (BMPs) are modular and can be installed using phased implementation. This approach is particularly valuable in retrofit situations where government partners can install lower cost BMPs first and track performance over time. Additional LID BMPs are only added to increase capacity where and when needed.

Traditional grey infrastructure projects typically rely on economies of scale. But conservatism must be built into the primary capital investment of the project since it is costly to go back and add capacity to a system once it is installed. Several agencies have adopted LID as an economical adaptive management approach to augment grey infrastructure capacity. This allows a more refined (i.e. smaller and lower cost) initial facility that can be expanded later, if needed, at a lower cost.

Plan for overflow in extreme events

When doing modular implementation it is important to consider what happens when the system goes into overflow – particularly since early phases of implementation stormwater facilities are likely to go into overflow more often. Many stormwater management facilities are designed up to the 100-year storm, but even these facilities must be designed with an emergency overflow in case of extreme events, or should the main outlet stop functioning. This concept is also applicable to LID design and climate change adaptation.

Overflows for climate change consider not only how it overflows (armoring), but also where it overflows and how capable that location is to recover (resiliency). Test the sensitivity of the facility to increased runoff: If the consequence of overflow is a small amount of nuisance flooding, then an adaptive approach might be a good option. If the consequence of overflow is increased risk to life safety, then a more proactive approach is needed.

Learning from other climates

Many regions in the U.S. are anticipating increased rainfall intensity that is likely to change design practices.  The communities in these regions can learn from others that already design for such events. For instance, many places in the Southwest rely on forebays that are designed to capture sediment from intense and infrequent storms. In locations where facilities are empty for most of the year, specially designated walking paths can allow facilities to be better integrated into the landscape. 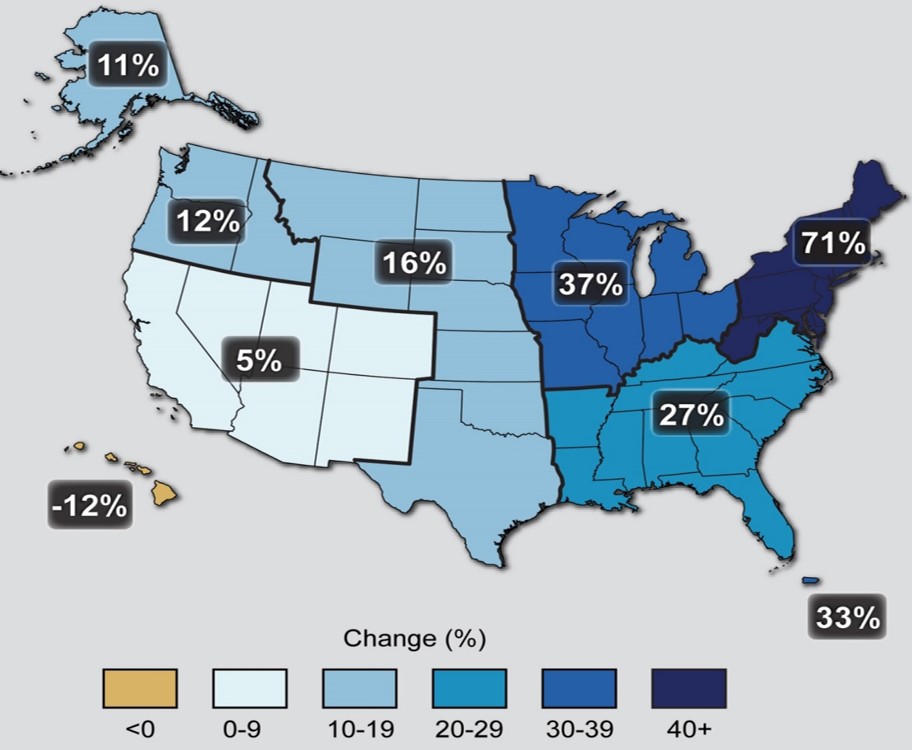 Since climate change does not impact all geographies similarly, some locations must also consider the impacts of water scarcity on LID facilities. Many LID facilities rely on vegetation to function. Communities should plan to look at long-term trends in plant survivability and identify when a change in plant palette might be needed. For example, in Western Washington’s Puget Sound Region, a typical plant pallet for bioretention facilities includes native plantings that can survive near continuous inundation in the winter and months of drought in the late summer. Planting and irrigation techniques from water scarce regions will likely spread to other communities.

We can take a lesson from nature about diversity. To prepare for climate change uncertainty, communities should consider using a variety of systems to manage stormwater. With LID it is possible, and often advisable, to use different BMPs within the same project.

The strength of many LID BMPs is that individual BMPs are composed of multiple systems. Consider a raingarden. A raingarden cleans stormwater by settling out sediment and absorbing pollutants into the soil media. Meanwhile plants and microbes break down the pollutants and maintain soil porosity. There is less risk of all BMPs being susceptible to the same climate change factor.

The outcome of the climate future is unknown, but whatever it is, these strategies will make our communities more adaptable and resilient.