What’s Behind the “Fresh Earth” Smell in Spring?

Question: What makes that “fresh earth” smell in spring?

What is that? Answer: In a word, geosmin.

Geosmin is an organic compound released by a group of soil microorganisms called actinomycetes.

Actinomycetes are filamentous “prokaryotes.” In other words, they are microscopic organisms whose cells have no “nucleus” enclosing their DNA. Organisms that do have cell nuclei—like plants, fungi, and humans and other animals—are called “eukaryotes.” 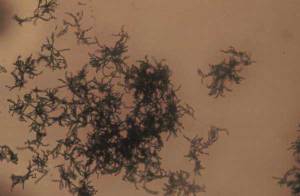 Actinomycetes as seen under a microscope. Photo courtesy of Tom Loynachan.

Actinomycetes are also composed of “hyphae”—or small filaments or threads. Under a microscope, these microbes look a bit like a cross between fungi and bacteria, and were once called thread bacteria.

Many people associate the smell of geosmin with digging in a garden or plowing a field, or even an old cellar. For others, it’s what they smell during a rain. That’s because as rainwater enters the soil, the air in the soil is displaced, releasing the air and geosmin to the atmosphere.

People may even smell geosmin before a rain as a low pressure system causes degassing of the soil air.