What To Do When “Climate Change Hits Home” 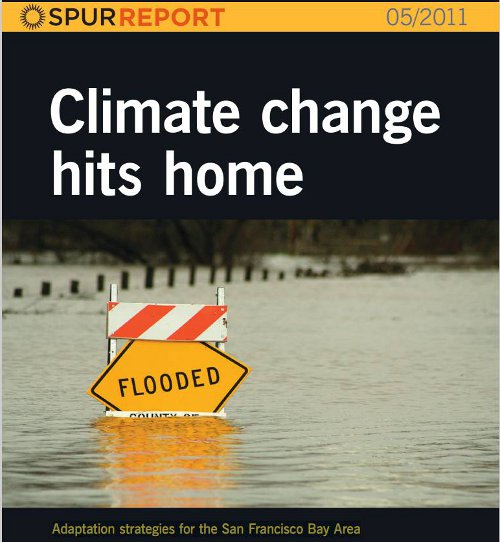 That headline was a little ominous, wasn’t it? It sounds like those scary preparedness pamphlets you see at a doctor’s office or in the subway. What to do if you see somebody acting suspicious. What do to if your baby chokes. What to do if [Bad Thing here].

And that brings me to climate change.

According to recent research, average temperatures in California are expected to be 4 to 9 degrees Fahrenheit higher in 2100 than they are today.

So it was with particular interested that I read “Climate Change Hits Home,” a report by the San Francisco Planning and Urban Research Association (SPUR). The report discusses the changes that will be coming to the Bay Area courtesy of climate change and offers recommendations and adaptation strategies for coping with these challenges.

This is what the report had to say about Urban Heat Island Effect:
“Urbanized areas around the Bay may be especially vulnerable to the phenomenon known as “urban heat island”: where heavily urbanized areas can become and remain significantly warmer than nearby areas because of the prevalence of heat-retaining materials like concrete and asphalt. . . Impervious ground and roof surfaces limit natural cooling that takes place when plants and soil release water vapor into the air, a problem compounded by lack of shade” (emphasis is mine).

The report also addressed some of the expected stormwater management complications, including more severe winter storms and likely flooding.

In both cases, green utilities factor heavily in to SPUR’s key recommended actions. An expanded urban forest could have a big impact on lowering temperatures in cities, and “green infrastructure and low-impact development” are both endorsed as effective and important stormwater management techniques.

This is not news — and I don’t mean that in a bad way. SPUR is sharing solutions that have been proven over and over again. We know that trees and soil are uniquely equipped to contribute to a majority of the better streets and cities goals that we read about, including (but certainly not limited to)

In the San Francisco Better Streets Plan, for example, there are 10 stated goals and policies. Growing truly robust and healthy urban trees designed to manage stormwater on-site would help contribute to eight of those, AND, done right, could also save the city money in the process. Is there any other single feature for which that is true?

Yet we are still seeing many municipalities and developers struggling to truly recognize the important role trees and soil can play in the health of their communities. For those that do recognize it, it remains a challenge to push through policy and design changes to help make those goals a reality.

These are the challenges ahead of us. It is too late to head it off — climate change is coming, no matter how we decide to cope with it. Green infrastructure solutions like a thriving urban forest must be a part of any successful strategy to mitigate its effects. We cannot get started fast enough.