The Rise of the Pedestrian Plaza: Street-to-Plaza Conversions in the U.S.

In the U.S., cars are king. Our cities and neighborhoods are designed around how cars travel though them, and pedestrians are secondary – if a pedestrian can safely cross traffic, the area is deemed a success. It has long been said that if you plan cities for cars and traffic, you will get cars and traffic. While if you plan for people and places, you will get people and places. More traffic and greater road capacity are not the inevitable results of growth, but the products of very deliberate choices which shape our communities to accommodate cars. Recently, city planners and designers have started to make different choices — designing our streets as comfortable and safe places for pedestrians, bicyclists, and drivers.

In the last decade, cities, non-profit organizations, and neighborhood groups have made sometimes-controversial decisions to create improved pedestrian spaces and promote public health. Using a technique sometimes called Lighter, Quicker, Cheaper (LQC), these street-to-plaza conversions use simple elements like moveable tables, umbrellas and chairs; colorful, patterned surface treatments and plantings; and lively and entertaining programming to create more publicly accessible open space. These projects focus on low-cost, low-risk strategies to remake public spaces, and are often done as a trial for a more permeant future solution. Changes can include new amenities, such as planters and public art, new configurations of the street using paint and bollards, and space for events and activities – farmer’s markets, free concerts, and outdoor movies are popular attractions.

Street closures are often controversial, and all communities worry about the effects of closures on emergency response vehicles, street network connectivity, and the capacity of adjacent streets. Yet most communities find that the closures do not impede access. When designing a street-to-plaza project, it is important to preserve access to homes and businesses while eliminating through traffic.  Drivers will have less access to the street, but people walking or bicycling will have full access.  In this type of closure, bollards or planters are installed in a line across the street with five foot gaps for bicyclists. In the center, a 10-foot-wide gap is provided for EMS vehicles designed to allow access by EMS vehicles but not the general public.

As more cities take the plunge into these conversions they often find that street-to-plaza conversions support local businesses, foster neighborhood interaction, enhance pedestrian safety, encourage non-motorized transportation, and reimagine the potential of city streets. Here are few examples of street-to-plaza projects that are in the works, on their way to permanence, or a new permanent feature of the urban landscape.

Announced just last month, The City of Detroit will close a key intersection downtown (Woodward at Jefferson Avenue) to create a people’s plaza complete with artwork, food trucks, seating, and landscaping, as well as formal programming in the form of music or other events several times a week.  The plaza aims to expand upon the recently added adjacent esplanade.

Some citizens are wary — work will proceed very quickly, closing the intersection and opening the new plaza the following Monday. Like many street-to-plaza projects, the new plaza is scheduled as a 90-day trial, after which the city of Detroit will evaluate the results.  The new plaza, the esplanade, the recently opened QLINE light rail and the new MoGo bike sharing program are making this area a great example of walkable urbanism — a densely occupied district that reduces the role of motor vehicles.

Located with the Silver Lake neighborhood of Los Angeles, a small plaza opened along a grassy median at the intersection of Sunset Blvd. and Griffith Park Blvd. in 2012. The section of Griffith Park was closed to cars, painted with chartreuse color polka dots, and dubbed Sunset Triangle Plaza. Set to run as a pilot program for one year, the plaza street furniture, large umbrellas for shade, colorful planters, and waste receptacles.

LA City Planning Commission President Bill Roschen said “the City Planning Commission wanted to find a way to quickly and cost effectively bring open space to Los Angeles.  We modeled this initiative on the success we saw in New York City [i.e., in Times Square], and we hope it is a game-changer for how we transform under-used spaces into community assets.” 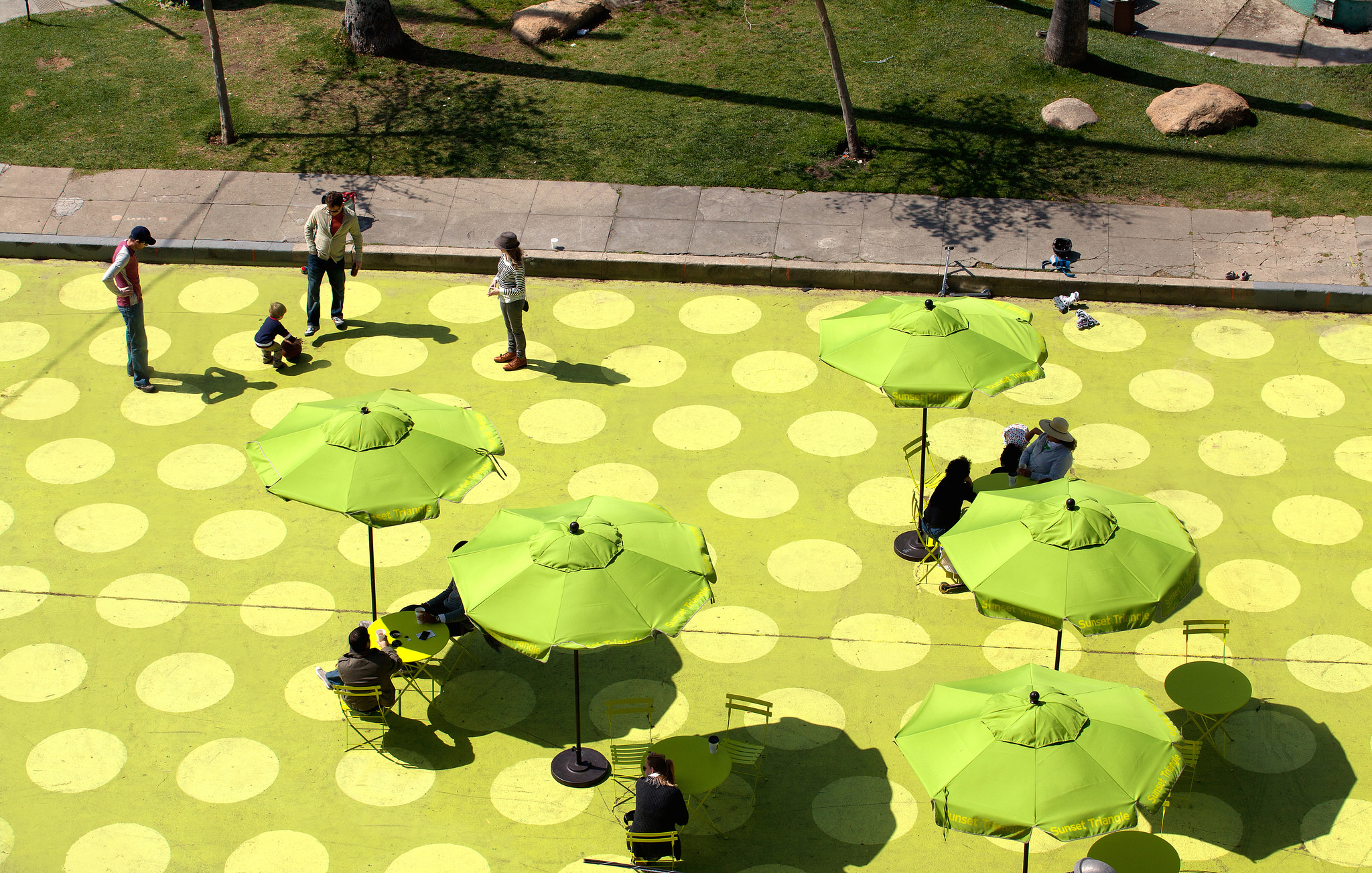 The project was a hit – a farmers’ market occupied the plaza two days a week, movies were shown, and people enjoyed relaxing under the large umbrellas, latte in hand.  After two years as a temporary installation, the city’s Department of Transportation reached an agreement with the Silver Lake Improvement Association for the management, maintenance and operation of the plaza. The motion stated, “With the success of the Plaza and its integration into community life, it is now appropriate to make this demonstration project a permanent fixture in Silver Lake. By designating this public space as a pedestrian mall under California law, the operators of the Plaza can implement appropriate greening, including trees, and link the Plaza with an adjoining park”.

Beginning in the summer of 2009, Times Square was the site of an unprecedented experiment by NYC Department of Transportation to convert five blocks of Broadway from an overwhelming traffic thoroughfare into a series of pedestrian plazas. The program, called “Green Light for Midtown”, reshaped the boulevard as an attempt to remedy severe pedestrian overcrowding (“pedlock”), intense competition between multiple users for very limited space, and an ugly and cluttered ground plane.

The new pedestrian zones, launched as a pilot project running through the end of the year, added over 60,000 SF of usable, car-free space for the over 360,000 pedestrians passing through Times Square every day. This nearly doubled amount of pedestrian space provided new places for visitors to sit and linger and more room for New Yorkers in a hurry to walk quickly. 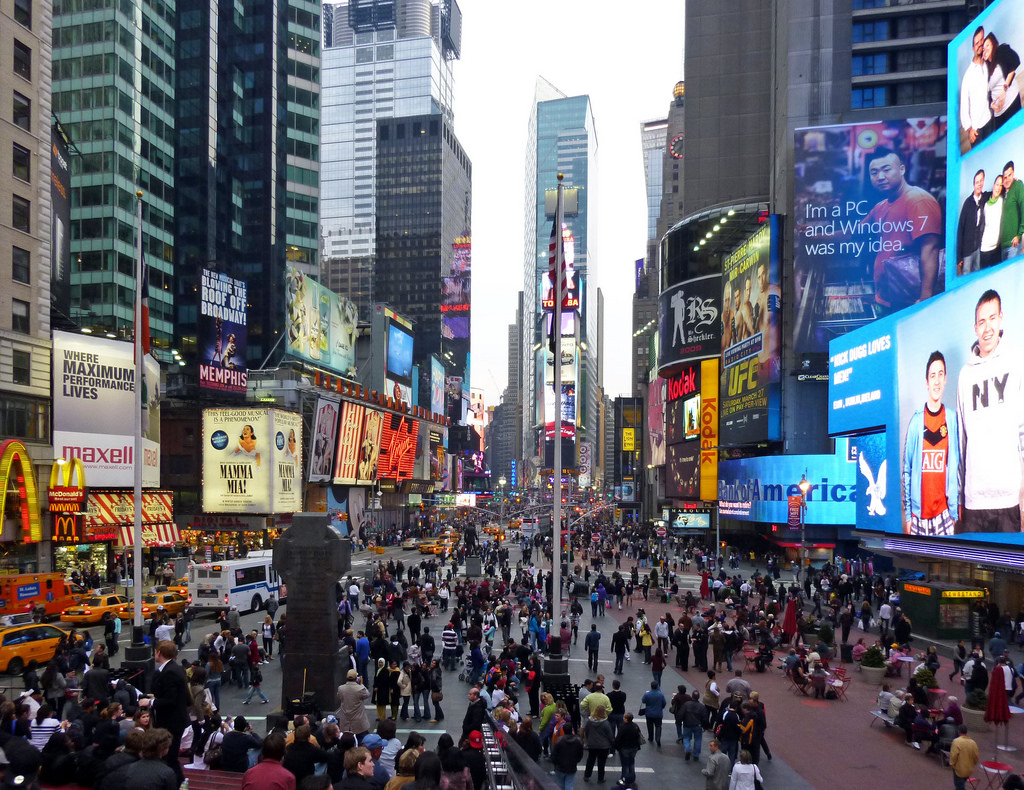 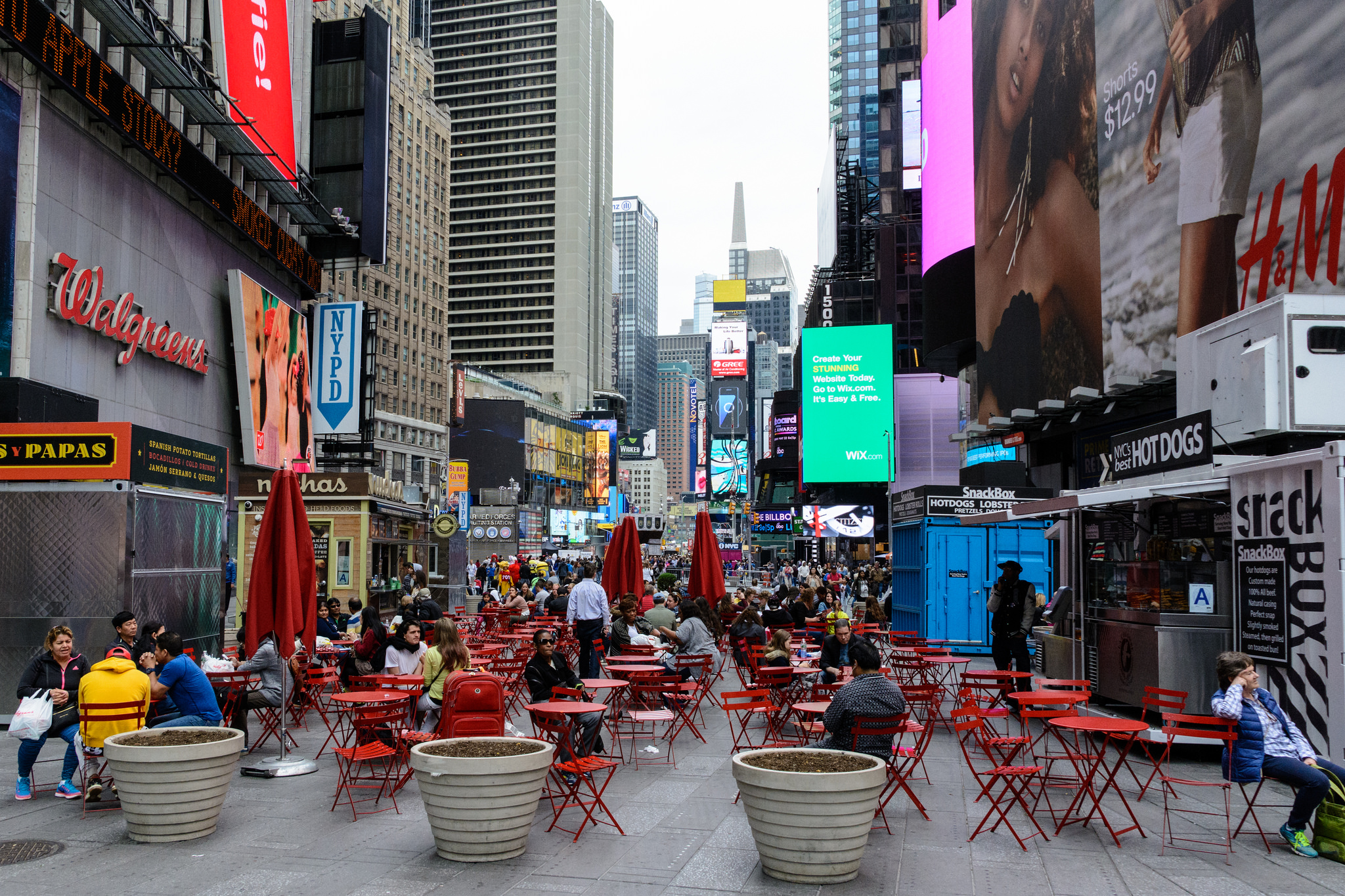 With this minimal investment, Broadway was transformed into an inviting place for people, finally putting “square” back in Times Square. Before and after implementing Green Light for Midtown as a pilot, the DOT collected extensive data on travel times, traffic volumes, pedestrian volumes and traffic accidents in the months just prior and just following project implementation. According to this data, the project delivered on its expectations:

In early 2010, Mayor Bloomberg reviewed the results of the project and decided that the changes would be made permanent. “Transforming car space into people space helped the local area grow and thrive,” said Janette Sadik-Khan, the former DOT commissioner. “Retail asking rents have tripled and new stores have moved in…Investments in the street are investments in our city and the economy and Times Square has creative a powerful example for cities around the world.” The success of Times Square has resulted in more street to plaza projects in NYC. Check some out here.

With more and more case studies like these popping up around the U.S., you may see a new pedestrian plaza in your town if you haven’t already. These small but effective public spaces are succeeding in getting people outside and bringing communities together.

Nicole Peterson is a landscape designer working in Minneapolis, MN.