Many factors affect tree health. Are they all equally important or are some more important than others? According to Kim Coder, PhD, Professor of Tree Biology & Health Care at the University of Georgia, soil compaction is by far the biggest constraint on tree growth. In a 2007 paper, he wrote,

“Soil compaction is the most prevalent of all soil constraints on shade and street tree growth…Many people become obsessed by small constraints on trees while major life-altering impacts are ignored. Soil compaction is one of those major problems causing significant tree stress and strain, and whose impacts are usually blamed on other things. Figure 1 shows the individual items causing the greatest growth limitations for tree growth. The top three things (by far!) are soil water availability, soil aeration, and soil drainage — all three greatly disrupted by site compaction. Drought and soil compaction head the list of major tree growth stress problems”

Figure 1 (below), taken from the same paper, shows a graphic representation of the relative stress produced by soil compaction compared to other various environmental factors on tree growth. 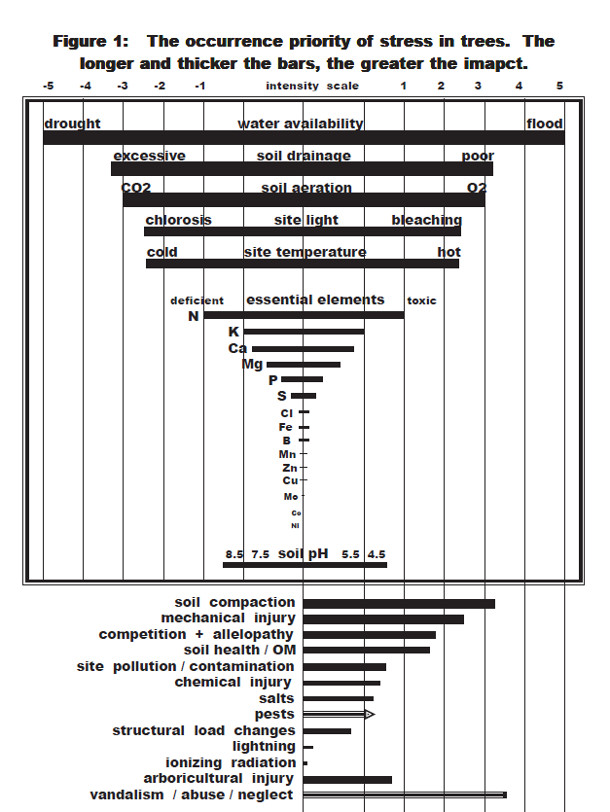 As you can see, soil compaction tops the list – along with associated problems such as water availability, soil drainage, and soil aeration. While excessive soil compaction often goes unnoticed during project design, it can actually kill a tree. Moreover, once a soil is excessively compacted, the compaction is hard to remedy.

What is soil compaction, what causes it, and how widespread is it?

Soil pore space is important for aeration, infiltration, and healthy root growth. An ideal soil has 50% pore space. The larger pores are filled with air, and the smaller ones with water. The remaining 50% of soil is 45% mineral materials and 5% organic matter. When a soil is compacted, soil particles are squeezed together, which reduces total soil pore space. Natural soils have pore spaces between individual soil particles and between clumps of soil particles. These clumps are called soil aggregates. Soil aggregates in natural soils are called peds. Activities which decrease pore spaces between soil particles, and activities which destroy soil ped structure and ped pore space, generally negatively impact trees. Activities that can cause compaction include, for example, loads from foot and vehicular traffic and equipment, other heavy loads, moving soil, stockpiling soil, and even tilling.

When a soil is compacted, soil aeration and permeability are decreased, and it becomes more difficult for roots to penetrate the soil. As compaction increases, root growth first becomes stunted, and as it continues to increase, it eventually completely limits root growth. As would be expected, when soils become more compacted and pore space decreases, bulk density (dry weight of soil divided by its volume) increases. Root limiting bulk density depends on soil texture. See Table 1 for root limiting densities of various soil texture classes. For comparison, Table 2 shows surface bulk densities of some urban land covers. Note that many urban land covers, including even urban lawns, and athletic fields, can be so compacted that root growth is affected or even restricted altogether. Rootable soil volume is usually very scarce in urban areas. Without adequate rooting volume, trees will never grow large enough to produce anywhere near the level of ecological services they are ultimately capable of providing. 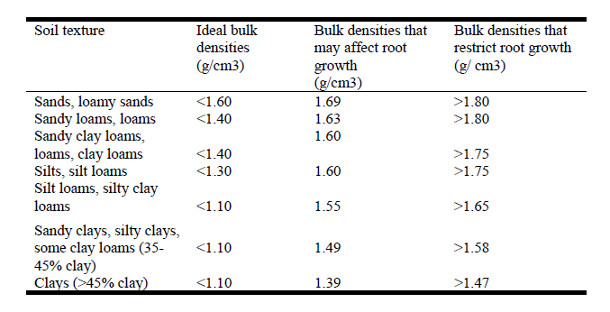 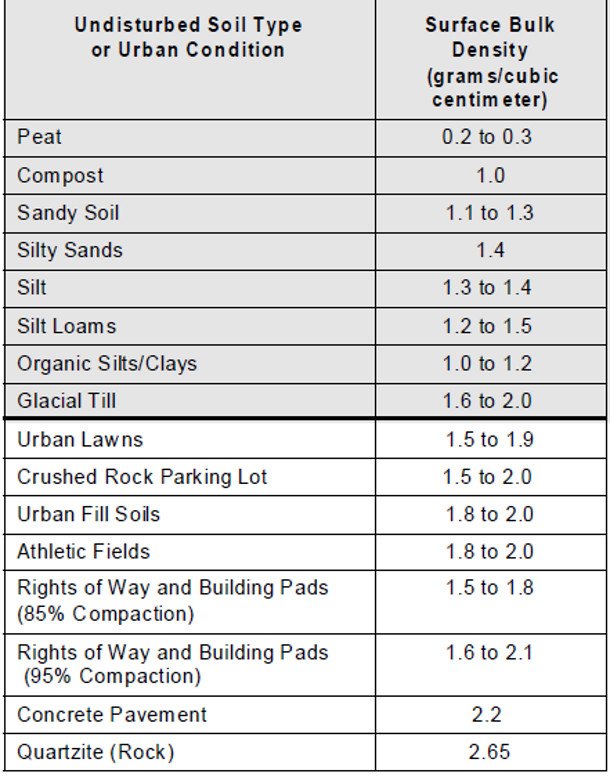 Why is compaction a problem?

Negative Effects of Compaction on Soil Structure and Chemistry

When soil is compacted, the number of large pores decreases and the number of small pores increases. As Coder writes, “The total pore space of soil being compacted initially increases as more capillary pores are created and as aeration pores are lost. With continuing compaction, total porosity declines and oxygen diffusion rates plumate. The pore sizes which fill and empty with water and air are most impacted by compaction.”As a result, less air and water can be held in the soil.

Less air in the soil

Reduction of soil aeration pores has many negative effects on soils and trees.

As less oxygen diffuses into the soil, chemically reducing soil conditions develop and toxins are formed by tree roots and soil organisms. “In normal soils, these materials (if produced at all) are quickly oxidized or removed from near tree roots. In compacted soil, normally produced materials, materials produced under low oxygen conditions, and anaerobically produced compounds, are not oxidized nor removed from where they are produced. The longer the residence time of some of these materials, the more damage to tree roots.”

In addition, when oxygen is greatly reduced in soil, “organic matter is not mineralized or decomposed effectively” (Coder 2007).

Less water in the soil

As soils become more compacted, they have less plant available water, and infiltration rates decrease. Compaction decreases volume of large capillary pores, which hold tree available water, and increases volume of small capillary pores, which hold water that is held too tightly too the soil to be available to trees. Poor drainage in compacted soils also prevents oxygen movement and increases production and residence time for carbon dioxide and toxics.

Compaction brings soil particles closer to each other, so surface friction and soil strength are increased, which is good for building pavement or buildings, but bad for root growth.

As the anaerobic layer in the soil expands closer to the soil surface, reducing the soil depth and volume available to tree roots, trees also become more susceptible to drought and heat stress.

As nutrient and water resources are limited by soil compaction, and more effort is required to seek those resources, tree growth above ground is also stunted.

Stress from soil compaction can also result in branch and root dieback.

Trees with root systems that are constrained in size by insufficient rootable soil volumes are also more susceptible to windthrow.

Soil compaction not only affects trees, but changes the whole soil food web by reducing the aerobic organisms and favoring anaerobic and low oxygen requiring soil organisms, like Phythium and Phytophtora root rots.

Considering how many ways compaction negatively impacts soil structure, tree health, and health of the soil food web, its no wonder that Coder writes that soil compaction is by far the greatest environmental constraint on tree growth.

This post was originally published in December 2013. Nathalie Shanstrom is a sustainable landscape architect with the Kestrel Design Group.