The History of Marker Trees

We are all searching for signs in our lives. Which way do I go on this highway? Where should I live? Where should I work? We take internet quizzes to tell us what career we should have and what kind of dog we would be and in what country we were meant to live. We look for signs to tell us if we’re making the right choices. Signs from God, lucky pennies, four leaf clovers. I have been known to collect particularly sage fortune cookie messages, or bottle caps with wise words on their undersides. You never know when those fortune cookie lucky numbers might just be the winning lottery digits! You’d better follow the sign, right?

Trees have been used as signs for centuries. Between 2002 and 2005 I had the privilege of being involved with the Smithsonian  Museum of the American Indian.  During that time period, I worked with several native Americans, including a Native American ethnobotanist who taught me many interesting things about Native American Culture including the practice of using Marker Trees to show the way.  Native Americans used to use trees to tell in which direction they should travel. These were called Marker Trees.

Favorite tree selection for these trees were oaks, maples and elms. These species were selected for their flexibility in youth, but hardwood in maturity. Marker trees were bent in the direction of a frequently visited destination such as a water source, campsite, or a safe river crossing. A traveler through the woods might happen into a meadow area and find himself unsure of the correct path. A marker tree bent in the direction of the destination would lead the way. Often easily discernible, but sometimes covert, these trees let Native Americans know they were headed the right way. Conversely, a distinctive marker tree from one tribe might act as a “no trespassing” sign to the member of another tribe who might stumble upon it.

Methods for bending these marker trees varied by tribe, as did the appearance of the marker trees. A marker tree created by an Iroquois would have been different than one created by a Cherokee or Navajo. Nevertheless, the trees would have been shaped in such a way as to make it clear that they were man made, and not to be confused with Mother Nature’s handiwork. Regardless of the method used, the basic principal was to bend a sapling tree over and secure it in the bent position for several years until this man made habit becomes the tree’s own. 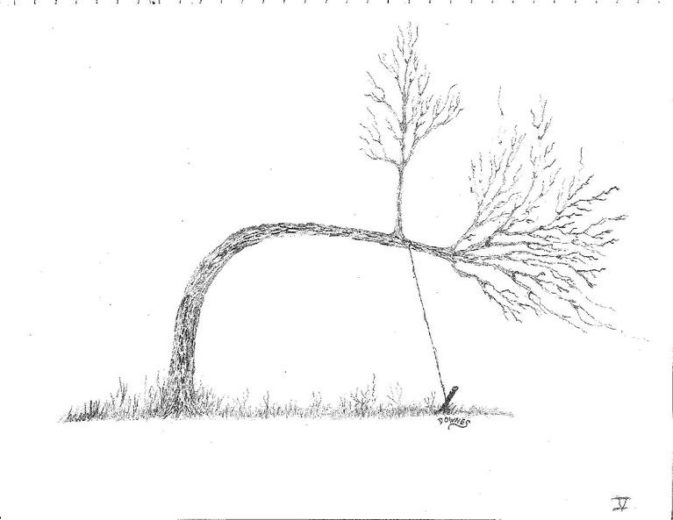 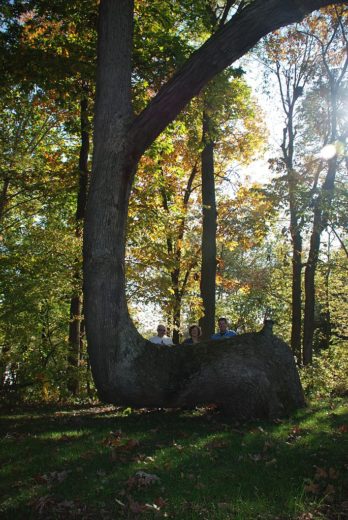 Starhill Forest Arboretum in Illinois specializes in the hybridization of new oak species as well as the preservation of senior oaks. They are breeding a variety of white oak which they have named Quercus alba ‘Pathfinder’. This variety of white oak is a selection made for its ability to be shaped into a desired shape, and was named as a tribute to the Native American marker trees from generations ago. It is not known when the earliest marker trees were created, however the largest marker trees have been measured as having 50” trunk diameters. Using historical tree diameter data, we can infer that this might date these trees back as far as 400 years! A very long time indeed for any landmark, let alone a living one.

So, what if you could create your own markers? To stop looking for clues in your fortune cookies, stop listening to your forever “re-calculating” GPS. Maybe today you look out your window and see your marker.

Ronda Roemmelt is the sales manager and representative for Mid-Atlantic sales at Ruppert Nurseries in Laytonsville, MD. In addition to 20 years of industry experience, Ronda also has a Bachelor of Science in Agricultural Science from Pennsylvania State University with a minor in Horticulture. Ronda is a Certified Professional Horticulturalist and an ISA Certified Arborist. This post originally appeared in Ruppert’s newsletter.