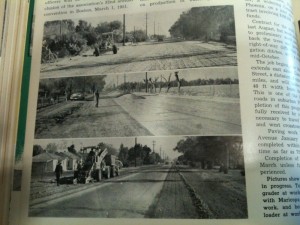 Taz Loomans of Blooming Rock shared a poem called “The Contractor & The Architect,” written in 1954, that she found in a copy of Arizona Builder & Contractor Magazines while doing research for a different article. It is too good not to share here!

The Contractor and the Architect
Are special kind of friends,
They laugh and jolly at a bar,
But on the job that ends.

The Architect is never wrong,
He’ll never tell you so;
And the Contractor just makes no mistakes,
He’s right, right from the go.

They have their little differences,
They even swear and curse;
But always work out something,
No grudges do they nurse.

The pictures drawn by the Architect
Are matters of debate
For the Contractor knows a better way,
He looks at them with hate.

The brickwork just completed
By the Contractor in good grace
Is amusing to the Architect,
And he laughs right in his face.

There’s always something extra
Wasn’t figured in the job,
The Contractor sends in figures,
The Architect screams, “robbed”.

So they work along together
Till the job is almost done,
The Contractor says he’s lost his shirt,
The Architect’s on the bum.

At last there comes the golden day,
There’s nothing left to do,
The job is finished to a tee
And polished bright and new.

The Contractor gets his money,
The Architect the same;
They have a drink together
For both have lost the game.

The Contractor buys a Cadillac
With the money that he lost,
The Architect a Ford sedan
And writes it off as cost.