The Basics of Bamboo

I run a business called Burton’s Bamboo Garden, so as you can imagine, I know a lot about bamboo, and I get a lot of questions about it from customers. Today, I want to talk about the basics of this amazing plant.

There are three types of bamboo: runners (monopodial), hardy clumping, and tropical clumping (sympodial). The runners are temperate, the hardy clumping are from the Himalaya mountains of Asia with high elevation, and the tropical clumping come from a very warm climate of zone 10+. It’s probably not the first thing that will occur to you, but it’s very important to know what USDA zone you’re in when planting bamboo.

Most of the country can only grow monopodial (running) bamboo because the winter weather is too cold. Only a small portion of the U.S. offers warmth in winter, where tropicals thrive. The higher the USDA zone number, the warmer it is in winter. Thus, some tropical clumping bamboos will grow in Miami because they have a warmer winter than Orlando. New Orleans will be muggy in summer but can be cold in winter. Most of the United States is too cold in winter and too hot in summer to grow hardy clumpers and only a small area will offer the elevation with cool, misty conditions they require. Still, if planted in a cool, filtered sunlight, the hardy clumping bamboo should thrive. 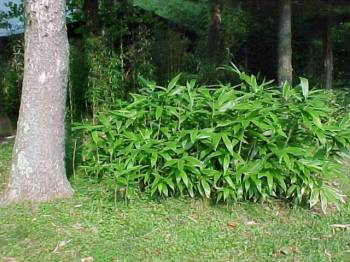 Mother nature’s message to almost all plants is “grow, spread and enlarge.” Bamboo is no different. Thus it sleeps the first year while it becomes established, creeps the second year and leaps the third year. “Sleeps, creeps, leaps” is a nice mnemonic to remember this.

The runners will begin their skyward growth in March and within 45-60 days attain their full height, never to grow another inch taller or larger in diameter in their lifetime. Then, the rhizomes (roots) begin their growth outward toward the warm sunlight. Just like other plants, bamboo gets its energy from photosynthesis through their leaves. It goes dormant and stops growing when it becomes cold.

Some phyllostachys will survive in a cold climate but never attain their full height. That only happens in a warmer zone.They become perennials with small diameters in cold temperatures and towering specimens in a warm climate. This happens in part because some types of bamboo don’t tolerate winter winds as well as others. Winter winds can be very damaging to bamboo, so the more winter wind protection that you can offer, the better the grove will look in spring. 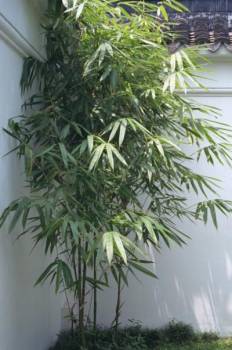 When it comes out of its dormant state, bamboo will begin photosynthesis quickly if the leaves are protected and green. The new shoots should be larger than the previous year’s new growth. In Ohio, where I’m located, two out of five winters are generally harsh, so you have an ebb and flow, harsh and mild, or yin and yang. Sometimes this means that come springtime your bamboo will have tan leaves that that make it harder for photosynthesis to occur. This is the reason the canes are small in Ohio, but large in Georgia, where the winters are warmer.

I know a lot of people find bamboo very troublesome and want to destroy it. If neglected, it can become unruly and a nuisance. Once you realize it’s a plant that is like any other living thing, though, it’s wonderful. By controlling its spread thoughtfully, by pruning the dead canes, and by root pruning and giving it fresh loamy soil to expand, it will become a thing of beauty.