In 2019, The Journal of Ecological Engineering, featured a study, “Suspended Pavement Systems as an Opportunity for Subsurface Bioretention” (Ecological Engineering 134, 2019, 39-46). The University of Tennessee’s Dept. of Civil Engineering and Dept. of Forestry, Wildlife and Fisheries (R. A. Tirpak, J. M. Hathaway, J.A. Franklin), partnered with the USDA Forest Service (E. Kuehler), to create the 2 year project (2015-2017), producing conclusive evidence on the viability of field-scale Silva Cell® systems’ ability to manage stormwater and remove pollutants.

Trees provide significant ecosystem services to the urban environment, including climate change mitigation, carbon sequestration, improved air quality, and increased property values. Typically, urban environments have the most challenging planting conditions for trees and DeepRoot’s Silva Cell suspended paving system provides the environment to promote tree health while meeting engineering needs like sidewalks and paving for above ground use. Over the past several years Silva Cell’s have been used as underground bioretention systems in urban areas where space is limited by high land costs and development. The University of Tennessee’s study is a companion to an earlier study conducted by North Carolina State University (led by Bill Hunt) that demonstrated the efficacy of the system for this purpose. 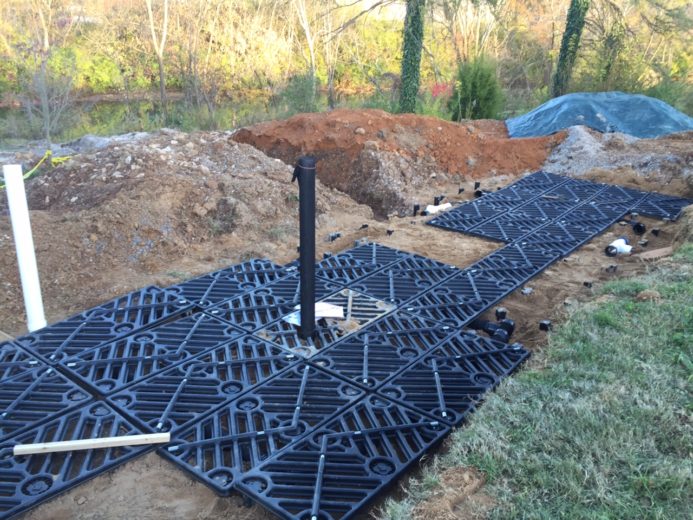 Objectives of the UT Study included:

Using Silva Cell as the Suspended Pavement System, two sites of similar size, qualities, tools, methods, and analysis were compared. For 27 months the two projects dubbed “north site” and “south site” of Knoxville’s University of Tennessee campus were closely monitored. Both sites and systems were of similar size: The north site at 22.3m2 and the South Site was 27.0 m2, representing 12% and 19% in drainage area, separated by 100m. The North Site was designed with a free drained Silva Cell system while the South Site was designed with an underdrain system. Both used a Bald Cypress tree. See Table 1 for more details on the projects varied parameters. 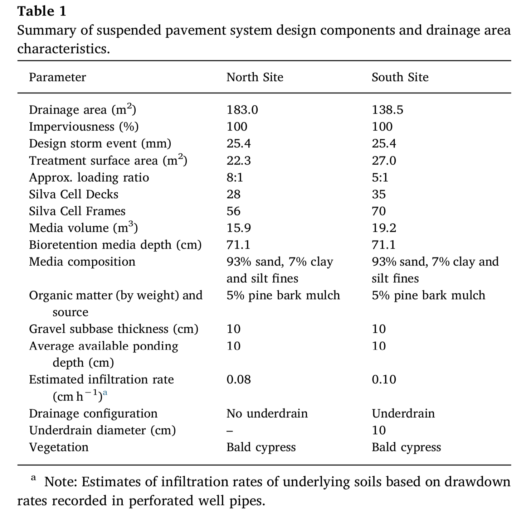 The study’s monitoring and data collection are impressive. Rainfall was recorded every minute between April 2016 and July 2018, where there were 146 storm events and 1809 mm of rainfall on the north site, and 148 individual storm events with 1922 mm of rainfall on the south site. The design storm (25.4mm) for both sites corresponded to the 88thand 87th percentile rainfall event sizes over the course of the study for the north and south sites respectively. Due to the large treatment area of the Silva Cell systems relative to the contributing drainage area, the majority of the water balance at both sites was comprised of exfiltration and evapotranspiration (ET), few instances of drainage overflow (bypass) were observed. Approximately 99.8% and 88.7% of all runoff volumes were exfiltrated into surrounding soils or released into the atmosphere as ET from the north and south sites, respectively.

The free drained site versus the under drained site resulted in moderate differences. The north site’s free drained Silva Cell system diverted 99.8% of runoff to exfiltration/ET, and completely captured runoff from 79% of storms. Similarly, exfiltration/ET accounted for 88% of runoff that entered the under drained south site, which completely captured runoff from 83% of events. TSS were only significantly reduced on the south site, though water quality improvements for many of the pollutants may have been limited due to low concentrations in influent runoff. The results show that the Silva Cell provided significant volume reduction via exfiltration regardless of whether there is an underdrain or not and performed similarly to typical bioretention cells. 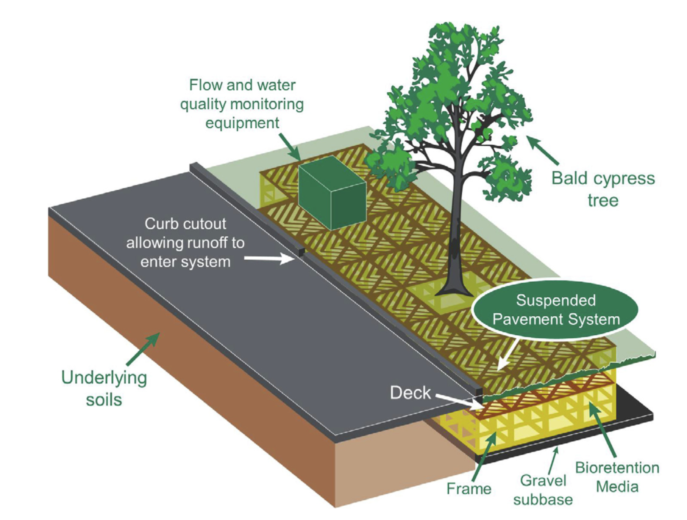 In addition to this academic study, DeepRoot Silva Cells have been used in projects around the world from London, Toronto, New York, Seattle, Fort Lauderdale and everywhere in between. To read the article in its entirety please visit The Journal of Ecological Engineering online via Science Direct and login to your account. Nonsubscribers must purchase the study.

If you have any questions about this study, whether a project is feasible in your new landscape/design project, or have any general inquiries, please reach out to [email protected] or call 415-746-1545.