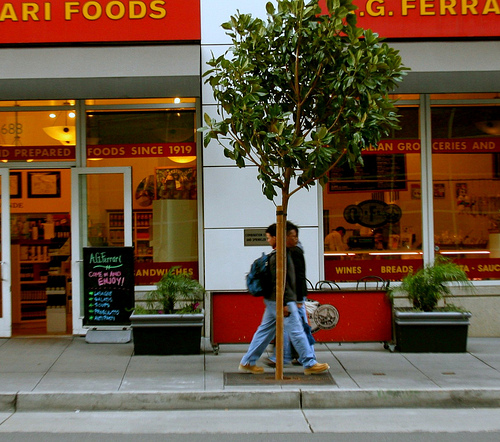 San Francisco has already badly missed the point on trees once, and now it looks like they may be doing it again. According to a Bay Citizen article, Mayor Ed Lee recently proposed heavy budget cuts that include transferring the responsibility for the care and maintenance of 24,000 street trees to property owners.

I cannot get my landlord to properly fix the doorknob of my building’s front door, which has fallen off in my hand several times just this month. You can see why I’m not optimistic about his interest in paying for the care of the four southern magnolias I see from my window. He is by no means unique. Most people I know have similar stories about their building management. Even some of the most responsible homeowners I know complain about the hassle of having to take care of their sidewalk trees. Mayor Lee’s proposal to put San Francisco’s tree care in the hands of property owners is not a solution, it is a surrender.

What incentive will property owners have to care for trees? Rationally, there are many good reasons. Research has indicated time and again that trees make property more valuable and desirable places to live, generating more revenue for home sellers and rental agencies. For businesses and commercial properties, trees have been shown to attract greater numbers of shoppers who are willing to pay more for their items.

Still, the fact remains that very few people think about them as meaningful long term investments. Instead they see — and this is not entirely unreasonable — a number of up-front costs. According to the Bay Citizen, if the proposed cuts are approved, “property owners would be responsible for pruning, repairing cracked pavements due to overgrown roots and the overall health of trees on the sidewalk in front of their property. In some cases, property owners might have to hire arborists, an expense that can run up to $400 per visit. They might also have to bear the expense of hiring crews to prune bigger trees, which can cost hundreds of dollars.” Given all this, I think they will quickly realize that it is far easier and considerably cheaper to “maintain” an empty tree pit. What will that mean for our beautiful city?

San Francisco’s 12 percent tree canopy cover is already ranked well below other major metropolitan areas like Atlanta (36%), Houston (30%), Boston (29%), New York (24%) and Los Angeles (18%) — to name just a few. The American Forests recommends 25-35% cover in areas West of the Mississippi. Our situation here is about to go from bad to worse. In 2006 the San Francisco’s Urban Forestry Council created a master plan that proposed a city-wide canopy cover increase, from 12 percent to 15 percent, by 2016. That modest goal cannot be achieved without active participation and leadership from the city.

For various reasons, San Francisco property owners are already responsible for about 80 percent (89,000) of street trees, so perhaps the abdication of responsibility over the remaining 20 percent (24,000) shouldn’t seem like a big deal. And yet, it feels like one. Budget crises are by nature tough on everyone. Sacrifices have to be made in all sorts of sectors and affect various populations; some things make the cut and others don’t. The actions of the city here are a clear indication that they do not see street trees as important elements of the environmental, commercial, or psychological well-being of San Francisco. And that is very sad indeed.