Proposing on the future.

“Arbor Day is not like other holidays. Each of those reposes on the past, while Arbor Day proposes for the future.” – J. Sterling Morton 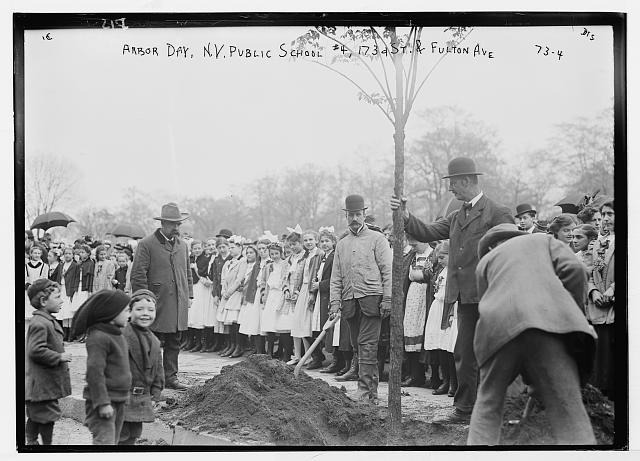 Arbor Day originated not in the dense forests of our country, but rather in the grasslands of Nebraska.  Before Nebraska had earned statehood and was still “The Nebraska Territory,” J. Sterling Morton and his wife Caroline moved to this frontier on the plains from Michigan.  Morton was a plant enthusiast and soon his property in Nebraska was rich with trees, shrubs, and flowers.  Using his position as a journalist and newspaper editor to spread information about trees, Morton lauded trees as an important tool to keep soil in place on the Nebraska plains, serve as windbreaks, provide shade, and be used for fuel and building materials. As Morton’s reputation grew, he became secretary of the Nebraska Territory, giving him another platform to stress the value of trees. On January 4th, 1872, he proposed the idea for a tree-planting holiday he planned to call “Arbor Day,” from the Latin “arbor”, meaning “tree.”  In Arbor Day Morton saw the beginning of a greater movement focused on the environment, though this type of thinking did not become popular for nearly another century.

The date of the first Arbor Day was set for April 10, 1872.  Prizes were to be awarded to groups and individuals who planted the largest number of trees properly on that day. The result was over one million trees planted in Nebraska on the first Arbor Day.  Later, in 1885, Arbor Day was named a legal holiday in Nebraska and its date of observance was moved to April 22nd  — Morton’s birthday. The holiday spread to other states during the 1870’s, with schools nationwide beginning to observe the holiday beginning in 1882. Today, all 50 states, as well as many countries around the world, recognize Arbor Day. The date of Arbor Day varies by state, often to best coincide with good planting weather.  This can range from January and February in the south to May in the far north.

Moving forward nearly a century, the seed planted by the efforts of Arbor Day began to grow exponentially. Americans were becoming aware of the effects of pollution on the environment, influenced by Rachel Carson’s 1962 bestseller “Silent Spring” and the 1969 fire on Cleveland’s Cuyahoga River. Until this time, protecting the Earth was not part of the national political agenda, and environmental activism was in its infancy. Then in 1969, Wisconsin Senator Gaylord Nelson resolved to convince the federal government that the planet was at risk. Inspired by the anti-Vietnam “teach-ins” of the time, Nelson developed an idea for a large-scale environmental demonstration, “to shake up the political establishment and force this issue onto the national agenda.”  This was Earth Day.

Nelson announced the idea and invited the entire nation to get involved in the event, and the idea took off.  Receiving calls and letters from across the country, Nelson had struck a chord with the American people, who finally had a forum to express their concern about environmental issues in their communities. It seemed natural to schedule April 22, 1970 – Arbor Day – as the first Earth Day. Today, a common practice in celebration of Earth Day is still to plant new trees. The date was also selected in part with college campuses in mind, falling after spring break but before final exams.

When the day arrived, rallies were held in most large American cities. Crowds in Washington, D.C., listened to speeches and performances by singer Pete Seeger and others, and Congress went into recess so its members could speak to their constituents at Earth Day events.  The City of New York shut down part of 5th Avenue for the event and speeches from politicians and celebrities alike were presented to a massive audience.  The impact was huge, raising awareness about environmental issues and awakening public attitudes on the subject. According to the Environmental Protection Agency, “Public opinion polls indicate that a permanent change in national priorities followed Earth Day 1970. When polled in May 1971, 25 percent of the U.S. public declared protecting the environment to be an important goal, a 2,500 percent increase over 1969.”

The impact of both Arbor Day and Earth Day has been profound. Arbor day turned people’s attention to the transformative nature of planting trees, and made tree-planting celebrations a mainstream idea. Later, Arbor Day inspired Earth Day, which kicked off the “Environmental decade with a bang,” as Senator Nelson put it. The Clean Air Act, the Water Quality Improvement Act, the Endangered Species Act, the Toxic Substances Control Act and the Surface Mining Control and Reclamation Act all came to fruition after the first Earth Day, eventually leading to the creation of the Environmental Protection Agency.  Both holidays have grown worldwide since their inception. Over 1 billion people worldwide participating in some kind of Earth Day activity, making it the largest secular civic event in the world.

Both Arbor Day and Earth Day have transformed environmental thinking worldwide – celebrate them both!  Plant a tree, get outside and clean up your neighborhood, pledge to eat more vegetarian meals, or learn how to reduce your household waste.  The history of these two events show us that a small action has the potential to become a movement, so get out and start a movement of your own.