If you are of a certain age (like me), you remember when shopping malls were the place to be. However, online shopping and cultural changes have greatly impacted the popularity and profitability of malls, resulting in vacant storefronts and little foot traffic. Now, hundreds of “dead” and dying malls sit decaying throughout North America – artifacts of an age before Amazon.

Cities and property owners have often struggled with what to do with these huge, now empty spaces. Some undergo renovation and see enough continued success to stay open, while others choose to completely rethink what a retail center is and how it can be utilized by a community. There is a movement to breathe life back into these buildings and make them useful, popular, and profitable again. Many of these developments are eliminating acres of parking in favor of rapid transit, bike infrastructure, and greenspace. Here is a look at some examples of remarkable mall and retail transformations across the United States and Canada. 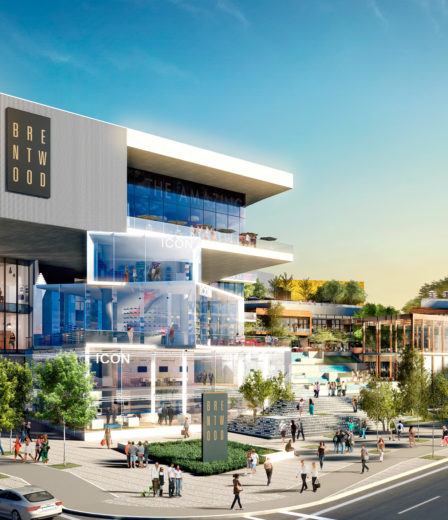 Opened in August 1961, Brentwood Town Centre (then Brentwood Mall) consisted of a partially open-air strip of shops and an enclosed mall. In the 1980s, a second level was added to the enclosed section transforming it into a huge retail destination. As the building aged and shoppers dwindled, development group Shape began to re-envision Brentwood. In November of 2014, the 28-acre Brentwood Town Centre site underwent major redevelopment as part of a new concept called “The Amazing Brentwood.” This initiative aims to create a master-planned neighborhood consisting of 1,300,000 sq ft of retail space, 500,000 sq ft of office space, and three residential high-rise towers all connected to a SkyTrain rapid transit station. 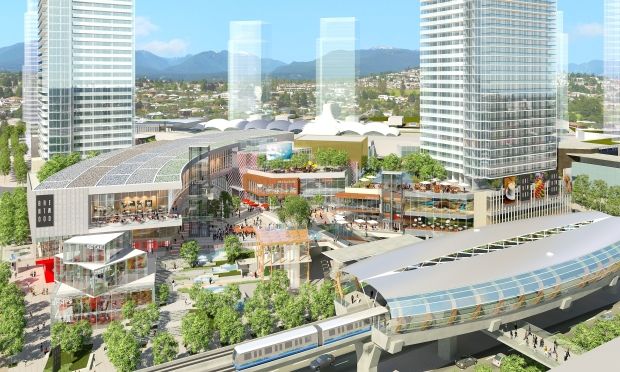 Brentwood Town Centre and its connection to the SkyTrain station

It was important to both the developers and the city of Burnaby that the center was truly transit-oriented, with connections to the SkyTrain, bus system, arterial roadways, and improved pedestrian and bike routes. The first phase turned the mall’s massive parking lot in front of the SkyTrain entrance into a central plaza that welcomes users arriving by these various modes to the retail, dining, and office spaces The Amazing Brentwood now offers. 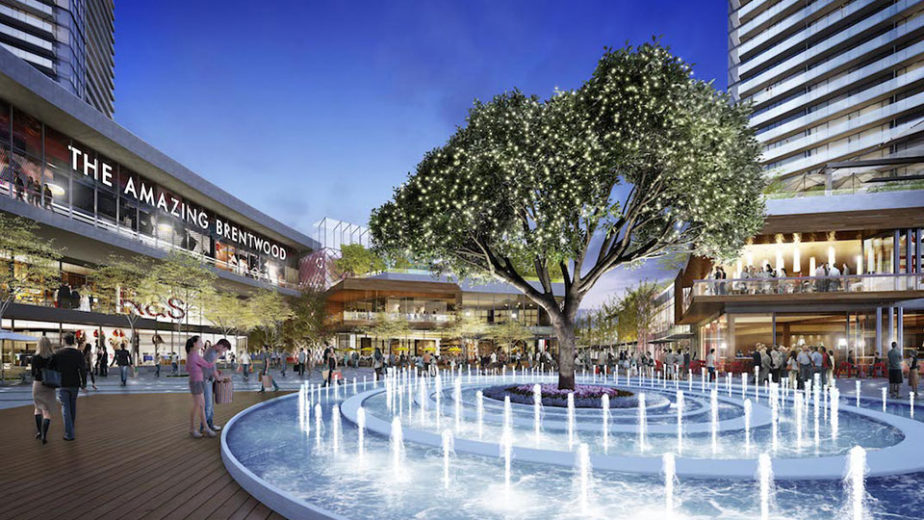 It was critical to the project designers that greenspace play a key role in connecting the various parts and phases of Brentwood. Streetscape plantings, a large public plaza, and rooftop landscaping tie various spaces together while providing a beautiful, lush atmosphere for guests and shoppers. DeepRoot played an important role in providing an urban tree canopy by insuring trees could grow successfully and beautifully along the streetscapes, in entry plazas, and even within the terraced steps outside the main entrance. Over 2,000 Silva Cells support the pavement in these areas, and the trees look wonderful. 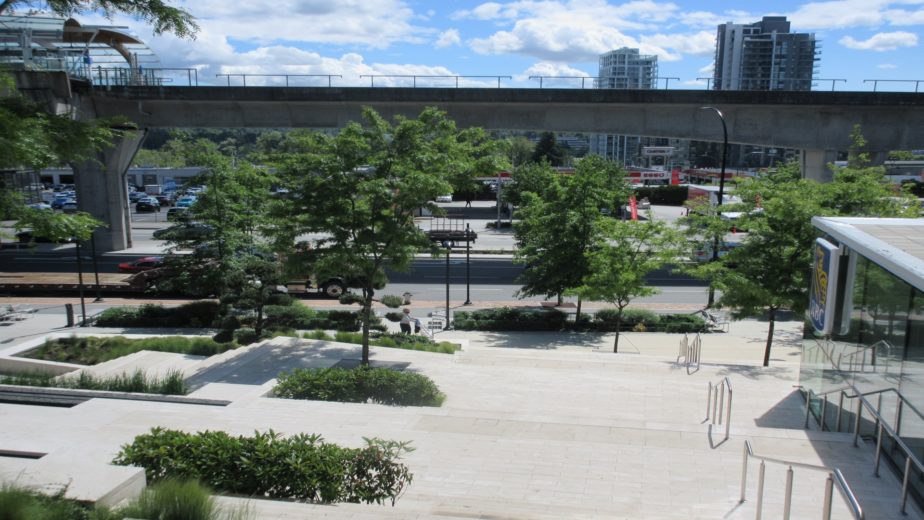 Silva Cells were used in many areas, including the front entrance staircase

As of 2021, 95% of the market, affordable, and rental housing has been bought or leased, and 90% of the retail spaces were occupied. Phase 2 is currently underway and will consist of more high-density housing. Shape is also planning a similar revitalization project, transforming the nearby Lougheed Town Centre into The City of Lougheed – Canada’s largest new master planned community. Like Brentwood, Lougheed Town Centre will become a transit-oriented hub featuring retail, dining, and housing on a single transit-connected campus. It’s clear that Brentwood Town Centre has paved the way for similar projects throughout Canada and the US. 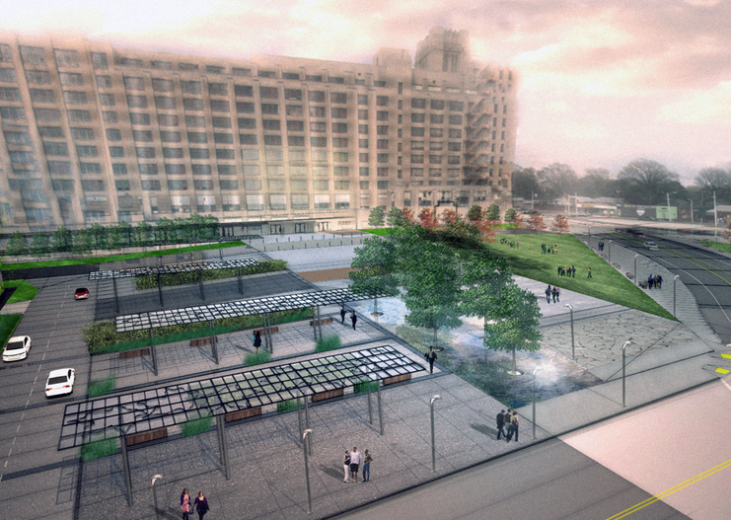 The new plaza and outdoor gathering space at Crosstown Concourse.

While not exactly a mall, this 1,500,000 square foot Sears, Roebuck & Co distribution center and retail store has seen a rise and fall like many shopping centers. Constructed in 1927 less than two miles from downtown Memphis, the location was once considered suburban, and Sears was a retail giant. Now, Memphis extends far beyond where the distribution center was built, and Sears has been in dire financial straits for years. This location, Sears Crosstown, closed permanently in 2009. The enormous building stood blighted for nearly 20 years, and no developers, organizations, or government groups could decide what should be done with the massive structure and there was an overwhelming push to tear the building down. However, some in the community proposed that the building could be saved and transformed into a hub for community and creativity. A non-profit was formed, and the newly formed Crosstown Arts facilitated the redevelopment of the Sears Crosstown building with arts and culture at the core of their mission. Aided by 30 funding sources and the early commitment of nearly 40 founding tenants, new life was given to the neglected site and Crosstown Concourse was born. 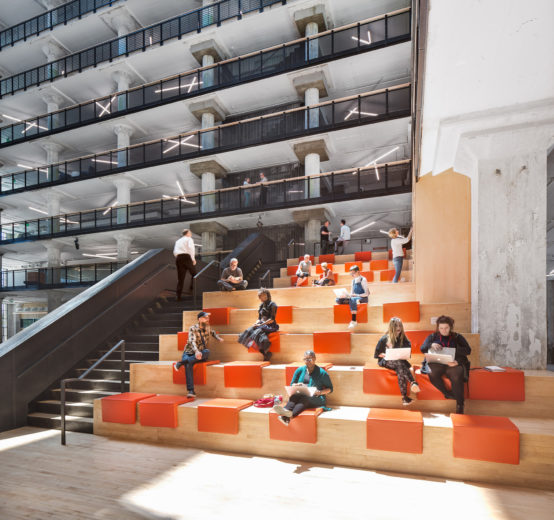 One of the many community gathering spaces within Crosstown Concourse.

Now on the National Register of Historic Places, Crosstown Concourse is an innovative vertical urban village including theaters, offices, numerous health-care agencies and nonprofits, a YMCA, a college, a high school, restaurants, a small hotel, and 265 apartments. The building has become a catalyst for Memphis – bringing life back to the surrounding neighborhood and drawing visitors with a packed schedule of events. The use of this beautiful building has shifted from products to people, and it has been embraced by the community as a valuable gathering space and community asset. Crosstown Commons stands as a superb example for how large retail and industrial buildings can shine again while benefiting the public. 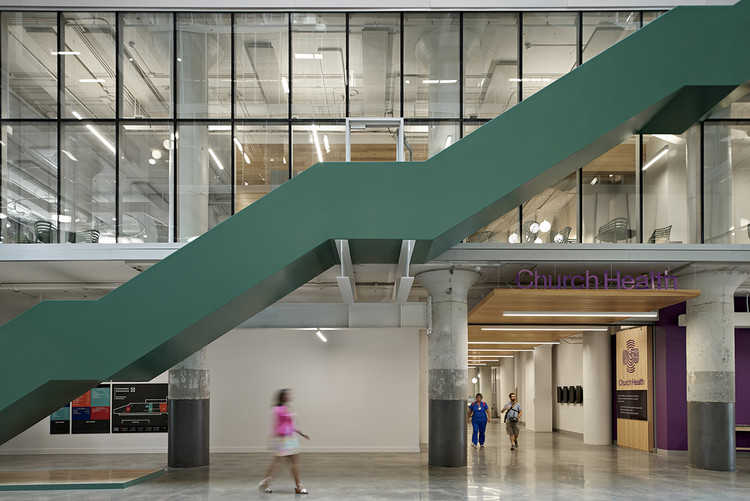 Community health resources are an important part of Crosstown Concourse. 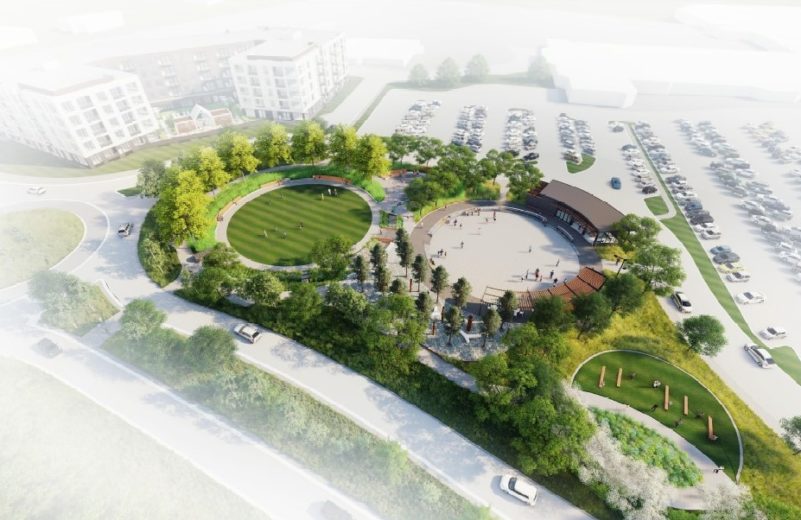 An aerial rendering of the proposed Ridgedale Commons.

Located in just outside Minneapolis, Ridgedale Mall opened in 1974 boasting 1,040,000 square feet and over 5,000 parking spaces. A booming hub of retail activity in the ‘70s, ‘80s, and ‘90s, Ridgedale has seen a decrease in the number of shoppers entering its doors like most malls. However, Ridgedale is not a dead mall and continues to sustain itself, even if it is not as bustling as it once was. Understanding this new reality, the mall recognized how much paved parking space was going unused and has partnered with the City of Minnetonka to create a new 2-acre park on the edge of Ridgedale’s surface parking.

Dubbed Ridgedale Commons, the park will have a plaza and a grass lawn that can host events and ice skating, a garden room with pollinator-supporting plants, an interactive fountain, a wooded lounge area, and a park building with restrooms, a warming house, and rentable space. Design firm Damon Farber Landscape Architects determined the site program by community input and engagement to ensure the space is an inclusive, sustainable, and multi-use park able to host a wide variety of activities and events. 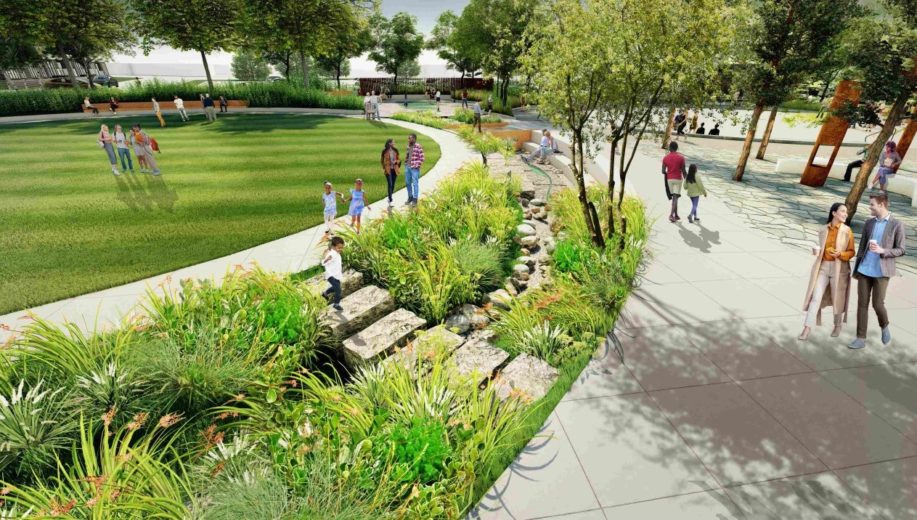 An interactive stormwater feature at Ridgedale Commons. Those who know our Uptown Normal, Illinois project may find this design familiar!

The park is expected to meet and exceed sustainability efforts by incorporating and integrating stormwater treatment, water reuse, native plantings, pollinator habitat, as well as education and interpretation opportunities within the park features. Construction began in 2021 and is set to be completed in mid-2022.

Ridgedale Commons is part of a larger long-term vision to transform the greater Ridgedale Mall area into a mixed-use community with higher-density housing and bike and pedestrian-friendly design – much like Brentwood Town Centre. The proposed project, currently named Ridgedale Village Center, aspires to have many of the same characteristics as Brentwood: mixed-income housing, improved infrastructure, transit hubs and density, incentives for redevelopment, and increased greenspace. Driveways will become parkways, surface parking will be replaced by dense parking structures, and the tree canopy will be increased.

In the future, don’t be surprised if you or someone you know ends up living or working in a revitalized retail space. Or perhaps you pull up to your dentist’s office and realize their new location used to be the mall you frequented as a teen. Malls and retail centers are already built, connected, and often in need of a second career. Improving, expanding, and revitalizing these areas is the next logical step for many communities, and the examples shown here illustrate the many ways these neglected buildings and parking lots can be transformed back into a community asset.