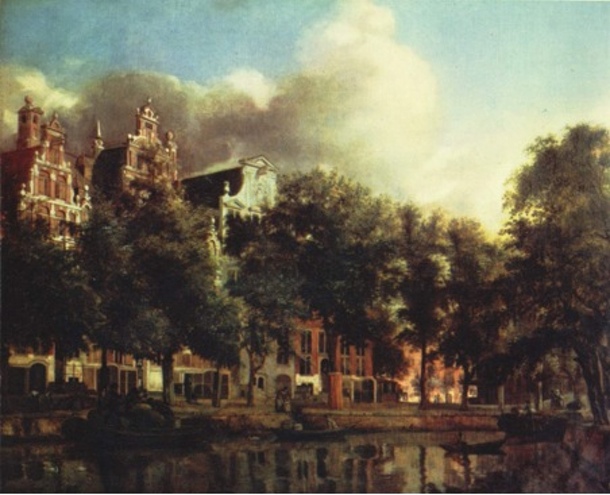 In the 1390’s, the town of Bruges – the silk and spice capital of northern Europe, and the Flemish capital – had its harbor and canal system silt in due to a small shift in North Sea currents. Bruges, truly a Medieval town, built its walls and canals in 1128, with only an occasional tree. The southern silk and spice capital of Europe, Venice, was geographically luckier than Bruges, with its more robust Adriatic Sea tidal surges, so its harbor and canals stayed silt free.

Bruges’ accident of geography forced the merchants, traders, guilds of the city, and Bruges Hanseatic League membership north to Antwerp. Antwerp, capitol of the Low Countries (Holland and Belgium) had a more reliable harbor and canal system than Bruges. Its urban canals were also lined with trees, and with the flood of new merchant wealth in the 1400’s, Antwerp blossomed, literally – mainly with Lindens (Tilia cordata).

A little bit later, in 1584, a Spanish invasion and blockade of Antwerp forced the descendants of these same Brugian entrepreneurs north to Amsterdam. Soon, Amsterdam became what Bruges and Antwerp had been: the hub of silks and spices in Northern Europe. Bruges, Antwerp, and Amsterdam are within 100+ miles of each other, and they had become the capitals of capitalism. In 1309, Bruges invented the first stock markets (Bourse), and double-entry book-keeping. From 1634 to 1637, most Low Country cities were swept up with “Tulipmania” – the trading of pretty tulips (the world’s first futures market bubble) – proving that the Dutch could and would sell shares in anything.

After 1500, the leading Lowland cities began overseas colonization to directly access the sources of Spice. Within a century, Antwerp, and then Amsterdam, took over the Portuguese spice islands and port cities of Asia, eventually taking over African, North American, and South American cities for importing and exporting of high value goods. In 1600 the Dutch East Indies Company (VOC) was formed in Amsterdam under a 200 year license from Holland, leading to the city’s “Golden Age.” The painting at the top of this article illustrates this perfect. It is by the Dutch master, Jan Van Der Heyden, and depicts  the worldly symbol of success: industrious Netherlanders, canals, barges, rich merchant housing, and in front of every one of them – large healthy urban trees like the ones along Antwerp’s canals.

This is just the beginning. Stay with me for part two of this series next Monday!