History of Street Trees in the British Isles: Druids to Holy Romans

Despite modest amounts of annual precipitation, Ireland and Britain are among some of the most perfect places to grow trees. The high latitudes and moderating Gulf Stream of the Atlantic Ocean has insured an exceptionally temperate environment is ideal for most trees, even sub-tropical ones such as palm trees. Never too hot, never too cold, never too dry to burn, and never too arid, ungrazed open meadows in the British Isles quickly revert to woodlands. It could be said that on these islands, it is harder to not grow trees than it is to grow them. This blog is the first in a series on the history of street trees in the “Tree Growing Country.”

Following the last Ice Age the two islands of Britain and Ireland, were cloaked in forests from north to south and east to west. The only exceptions to the forests were the heathlands, also known as bogs or peatlands. Most historians and philosophers agree that the Celts of Ireland, Scotland, Wales and England have had a deep affinity for trees for thousands of years. The Celts were completely embedded as a forest culture. The Celts, who originated in Central Europe (Switzerland), came to these islands and under the shade of these forest trees, worshiped the oak (Quercus spp.), birch (Betula spp.), ash (Fraxinus, spp.), rowan tree (sorbus spp.) (Mountain Ash), Hawthorne, etc. Their entire 25 symbol alphabet, Ogham, was derived from different tree species. Some, including the historian Henry Lawrence, who was an invaluable resource for previous History of Street Trees posts, refer to the Celts as “a cult of trees. Even today, the legacy of this ‘cult of trees’ is very evident in the British’ sylvan love.” 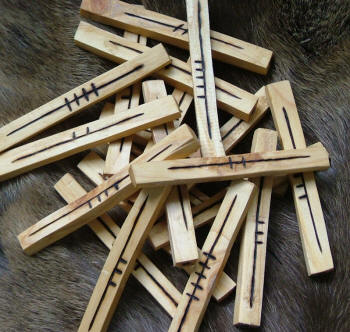 Who are you calling a Druid?

Julius Caesar’s most famous proclamation was from his invasion  of the Celts of the British Isles: I came, I saw, I conquered (“Veni, Vidi, Vici”). Roman accounts of Britannia and Hibernia, (Rome’s name for the British Isles) give detailed accounts of pagans (a Roman word for “country dweller”) worshipping trees. The Romans, during their road trip to Britain, paid particular attention to the Druids. Druids must have been powerful and important to the Celtic world-view, because they appeared to be their leaders – and knowing who they were was essential  to the Romans Veni, Vidi, Vici-ing them.

There are a number of possible root words for the term Druid. These Druids or Celtic seers were seen as a kind of tree worshipping high priests, complete with flowing robes and pointy hats. One of the translations of Druid is tied to the Gaelic word for Oak (Duir) and the Indo-European word “know” Wid . Many have speculated that this could mean “knower of the oak” – the oak was where the sacred vine mistletoe grew, and knowing the oak by extension meant knower of trees. It’s important to know trees when living in forests. I like to think of them as metaphorical tree doctor, or perhaps a forest sage. It’s hard to say exactly because there are no Druids around to tell us.

Almost 2,000 years ago, Romans chased the Druids into the Sessile Oak (Quercus pertreae) oak forests of Anglesey Wales, and essentially wiped out the order. Perhaps it is this cult of trees that expresses itself in bestselling books like Thomas Pakenham’s “Meetings with Remarkable Trees,” which was then made into both a BBC Radio and TV show. It is fact that clear-cutting of British forests did not start until after the Druids were gone, when the Romans began their 300 year plus sojourn in Britain. Roman cities did not have street trees, trees and plants were only for the interior courtyard or atrium of the house.

The whole life of Celts was embedded in the forest. For the Celts there was “no separating the wood from the trees,” they were one and the same -each tree species was so distinctive, it had its own letter. It was the Romans who separated the wood from the trees. The Romans cleared the forests for wood for buildings, ships and charcoal; trees were brought into the atriums or courtyards of Roman houses like pets. This is what I think is the modern problem with trees in the city. I prefer the Celtic and later British concept of trees in the city: vital, vigorous, large and filled with character.

So… whenever trees, my youth in Ireland, and the British Isles are put together into a single discussion, it seems like the Druid question is not far behind. As in, “are you some kind of a Druid?” Nope, not me, sorry, you’re mixing me up with someone else. I just really like trees, especially big ones.

Saint Patrick Christianized the Irish in the 400’s, which started the rise of Irish monastic culture in Europe, beginning at the Western edges of the Roman Empire and moving into the culturally collapsed center. This was coincident with the slow-motion fall of Rome in Western Europe, which happened over about a 100+ year period. The practices of privileged and high-ranking administrative Romans of Western Europe survived the multiple invasions of the Goths, Saxons, etc. and moved eastward to Constantinople, now known as Istanbul, in Turkey. It was now the Eastern Roman Empire – The Greek East or the Byzantine Empire (Greece, Turkey, Syria, Israel, Palestine, and parts of Yugoslavia, Romania, Albania, Armenia, Russia, Egypt, Iran, Iraq, Yemen) – that was ascendant in power, lands, and culture.

The collapse of the Holy Roman Western Empire – The Latin West (Italy, England, Wales, France, Southern and Western Germany, Switzerland, Belgium, Spain, Portugal, Northern Yugoslavia, parts of Tunisia, Morocco) financially, legally, administratively, defensively, and socially is hard to exaggerate. A good indication of quality-of-life, health, and social stability is average lifespan. The Byzantium Eastern Empire had men living until age 46, while medieval European men of the former Western Roman empire were only living to 33.  The establishment and the concept of cities in Western Europe after the devolution of the Western Roman Empire led directly to the hundreds of city-states of medieval Europe. It was these Continental European cities engaged in constant wars and sieges which evolved into these cities building massive fortifications. (See “History of Street Trees – A Hail of Cannonballs“). 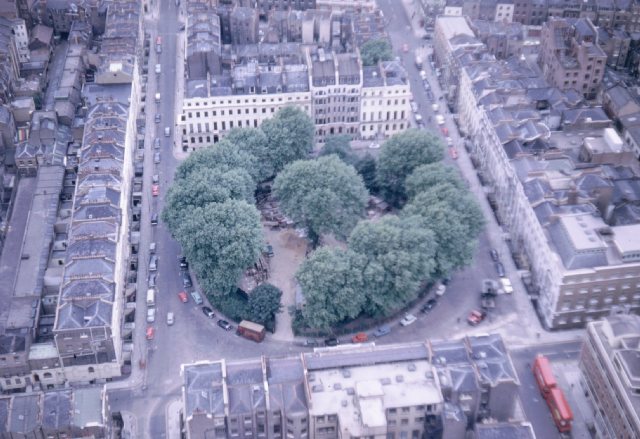 It was 1800’s London, almost 1500 years after Rome’s collapse, that was the center of the world’s new biggest domain – The British Empire. It became the first western city since Rome to have more than 1 million inhabitants. It was London that built upon the work of the Dutch’s pioneering work of trees in cities. London’s new parks and squares, filled with uncompacted soils, grew huge trees, and also gave the world’s industrializing smoggy cities one of the toughest deciduous street trees, resistant to air pollution from coal burning – the London Plane (Platanus x acerifolia) proudly displayed along miles of the Thames River Embankment. 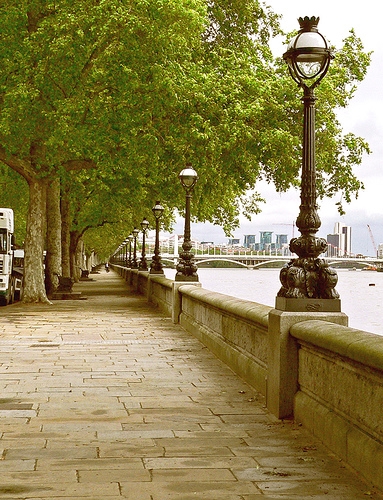