An Interview with Kelby Fite about Biochar

Dr. Kelby Fite is a national leader in the use of biochar to improve tree health. Kelby is an Arboricultural Researcher at Bartlett Tree Laboratory in Charlotte, North Carolina — a 350 acre private arboretum, diagnostic laboratory, and exceptional applied research center. His specialties are root biology and urban soil renovation. Kelby has a PhD. in Plant and Environmental Science (2008) from Clemson University; a Masters of Plant Protection and Pest Management (2001) and a Bachelor of Science in Horticulture (1999) both from University of Georgia.

Together with Dr. Tom Smiley, Kelby pioneered the use of air spading around existing tree’s roots. He has also been deeply involved in research on biochar – a product that, when added to soil, has shown significant improvement to visible signs of plant response such as greener, bigger leaves, and a taller, wider canopy. I recently sat down with Kelby to talk about his work with biochar and its effect on tree root health. This interview has been edited for clarity.

What inspires you about the potential use of biochar as a soil amendment for trees?

There is a tremendous opportunity with biochar. Almost all of the stresses on urban trees are below ground with the tree’s roots. Tree lifespan and urban tree canopy have declined because of these below ground stressors, primarily inadequate volume and quality soils for tree roots. Biochar, based on the research I have seen so far, seems like it could be one of those very important tree health breakthroughs to create a structure in the soil that holds nutrients and water for long periods of time.

What have your investigations revealed to you about tree growth with the original biochar in South America’s “Terra Preta” in the Amazon’s tropical rainforests?

Although these Amazonian native people were probably not geeking out about the quality of their biochar or uptake levels (the kinds of science I am interested in), they people put in a lot of labor and planning into adding biochar to these tropical forest soils for their crops.

They must have known how effective biochar was to grow crops.

Yes. They knew, or discovered, that biochar has been effective in retaining nutrients in these low quality (high leaching capacity) soils for hundreds perhaps thousands of years.

Many of us have heard about the benefits of mycorrhizae in soils for tree roots. Can you tell us some more about the value of microorganisms to tree roots?

Biochar creates a carbon structure, lattice, or skeleton in the soil that helps beneficial microorganisms to become established and survive. This internal carbon architecture is so stable that microorganisms can flourish there, and the long-term stable symbiotic root/microorganism relationships build more sustainable soil environments for tree function. The outcome of that is that biochar strengthens soil structure and arrests soil leaching.

When did you first start investigating biochar as a soil amendment?

I began seriously studying this issue in 2009. At the time, there was a tremendous gap in knowledge about biochar; almost no one had heard of it. Now it shows up in garden magazines and is much well more known as an amendment for soils.

What is the most commonly misunderstood aspect of using biochar?

The most common misconception is that biochar is related to cooking charcoal, activated charcoal, or residue from a fireplace. This is not the case; biochar is different from other types of charcoal and has specific properties for amending soil. There is tremendous variability in the activation process among biochars.

Please talk a little about the supercharging effect of compost and biochar in combination.

The key element of using biochar with trees is the addition of a nutrient source such as compost or fertilizer. We have found that combining compost and biochar together is much more effective – in other words, we see a more dramatic plant response – than amending individually with either compost or biochar. 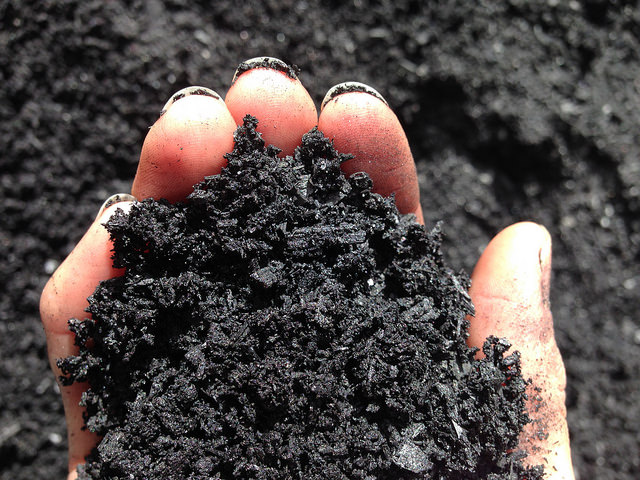 To date, biochar production seems to be operating at the cottage industry scale. When do you see this changing?

It still has that boutique product aspect, but the process is being scaled up. The production process of biochar has changed dramatically in the last five years. It was once only available in small quantities, but demand has increased because biochar has shown promise in different industries (for example, in the restoration of coal mine spoils/acidic soils). This large-scale demand for biochar has led to a number of sizable producers manufacturing biochar at the tractor-trailer load scale.

Within the next five years I see a large change in production scaling, with more research and technology improvements, finding easier and faster ways to manufacture biochar. Also, as biochar becomes big business for energy harvesting, the biochar amendment portion will be seen as a side product. A concern is that this financial dynamic may lead to an overall decrease in biochar quality from the big producers.

However, there are a group of new producers and new suppliers that we are watching who will probably become sizable biochar producers in the next 5 years. These companies are committed to laboratory testing of biochar. This is important because lab tests of biochar for quality control are not easy or inexpensive. At the moment there are only a few labs in the US that have the know-how to test the quality of biochar.

What is the most critical aspect of creating high-quality biochar?

What unanswered questions about biochar are most interesting to you?

Biochar is an open topic in a big book with so many questions – this is what makes it exciting.

Because there are so many tree species and so many kinds of soils, there is a huge body of unanswered questions. There will need to be lots and lots of PhD research projects to answer them. Probably the most interesting questions to me relate to the physiological change that may be induced in the plant through the addition of biochar in the soil.

What aspects of biochar are you currently investigating?

In open areas where cultivation is possible, air spading is a very good delivery system of biochar to tree roots. However, many of the urban trees that are most stressed and could really use the help of biochar amendments are under sidewalks, pavements, or parking lots where air spade cultivation is not possible.

To get biochar to these existing trees’ roots, we need a different delivery system. Perhaps a liquid carrier of biochar and nutrients, which could be injected, may be the next breakthrough.

What future do you see for biochar amendments in soils for urban trees?

I see lots of opportunities, because biochar is in its early stages of research. Biochar is both exciting and frustrating. But biochar quality is improving, and the air spading method of delivery is becoming more widely accepted overall. I would say the future is positive for biochar.

Thank you, Dr. Fite and Bartlett for your leadership, and for sharing your knowledge so generously.

L. Peter MacDonagh is the Director of Science + Design for The Kestrel Design Group.