What’s happening in Texas? As far as we can tell, a lot. The Lone Star state is making some huge investments in sustainable development, including green infrastructure. L. Peter MacDonagh, FASLA – who has visited the state many times over the years, and twice in the last few months to speak about using trees and soils for stormwater management – shares his top 10 thoughts on Texas Trees. As always, he blends history and current news into an infectious – and sometimes urgent – message about how we blend nature and the built environment. We hope they entertain and educate.  -LM

10. The namesake of big cottonwoods

In downtown San Antonio sits a small but famous fort. The walls are surprisingly short, and there are large Live Oaks in front and at the back of the fort, very large Cottonwoods. It’s from the Spanish name for those Cottonwoods, that we get the “Alamo”; Texas’ most sacred site of independence. 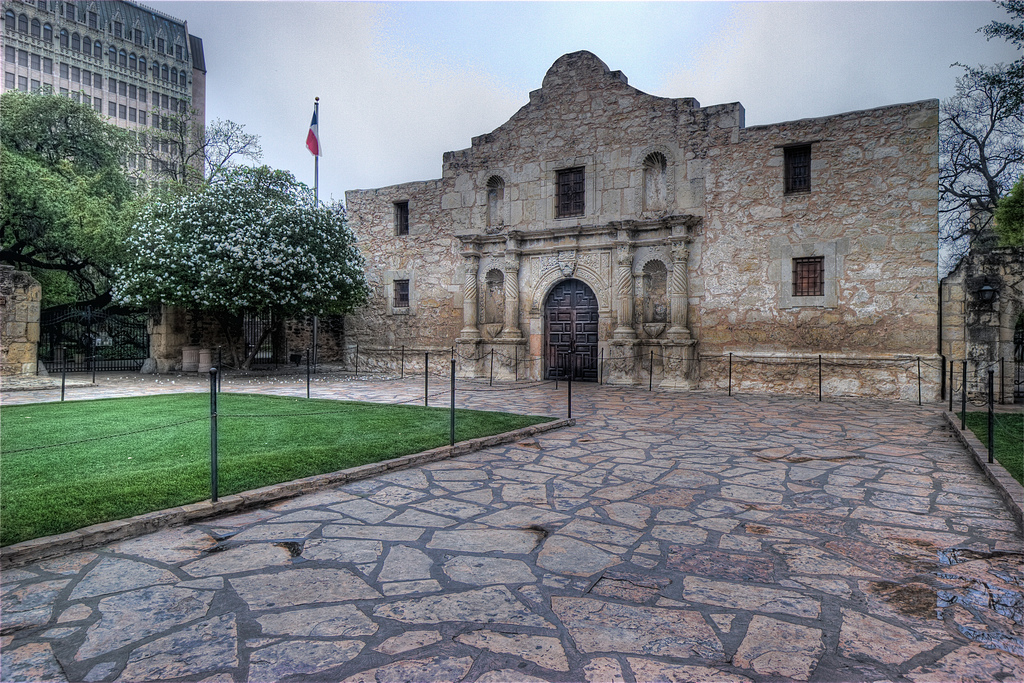 Texas, like other parts of the Southwest United States, is facing serious problems with droughts. The San Antonio Water System (SAWS) is now to the point where it is unable to buy enough water for San Antonio’s population – not because they can’t afford it, but that there’s no more water available to be purchased. As water scarcity in Texas cities increases, the need to find other sources of water becomes more and more important. Irrigating trees and especially lawns with an imaginary endless supply of future fresh water will soon be at an end.

The search is on for underutilized sources of water, and stormwater is one such source. As stormwater has high volumes of water with low levels of nutrients, heavy-metals, hydrocarbons and other pollutants, cleaning it to the fishable/swimmable standard to put into streams, lakes and bays was always thought to be too daunting and expensive.

There are two treatment options: mechanical and chemical treatment, or green treatment using plants and soils. Both systems have challenges and work in urban locations. But in a straight cost comparison between the two, mechanical/chemical treatment is prohibitively expensive. Running large volumes of stormwater into rootable soil beneath the pavement to grow large vigorous trees, however, is effective, inexpensive for stormwater, and an efficient way to treat low-level polluted water (stormwater). Watering city trees in Texas with stormwater is truly a breakthrough in controlling river, lake and Gulf pollution (Total Maximum Daily Loads, or TMDL’s, for us stormwater geeks).

Everyone jokes about Texas’s size. California is a very big State and Texas is over 50 percent bigger. France can fit inside of Texas with room to spare. I once drove from Chicago to El Paso. When I reached the Texas/Oklahoma border I thought to myself “I’m almost there.” Wrong! Spectacularly wrong. That turned out to be only the halfway point in the trip!

Texas’ population is about 25 million people, most of them living in and around five really big cities: Houston, Dallas, Fort Worth, San Antonio and Austin. There are 36 cities in Texas with more than 100,000 residents. Minnesota, where I live, has four. There’s no doubt about it: Texas is capital-B-Big. Now it’s time to grow Texas-size trees in its big, medium and small cities.

7. Please, turn down the heat

Of the five big cities in Texas, four have on average over 100 days per year with a daily high greater than 90F. The fifth city, Dallas, only averages 99 days above 90F! In 2011 I visited Dallas during the late summer when it was experiencing a historic drought/heat wave. The city had just suffered through 71 days above 100F, including the last day of September! Walking outside in that Dallas inferno I passed row upon row of newly planted street trees that were dead. I almost passed out myself. 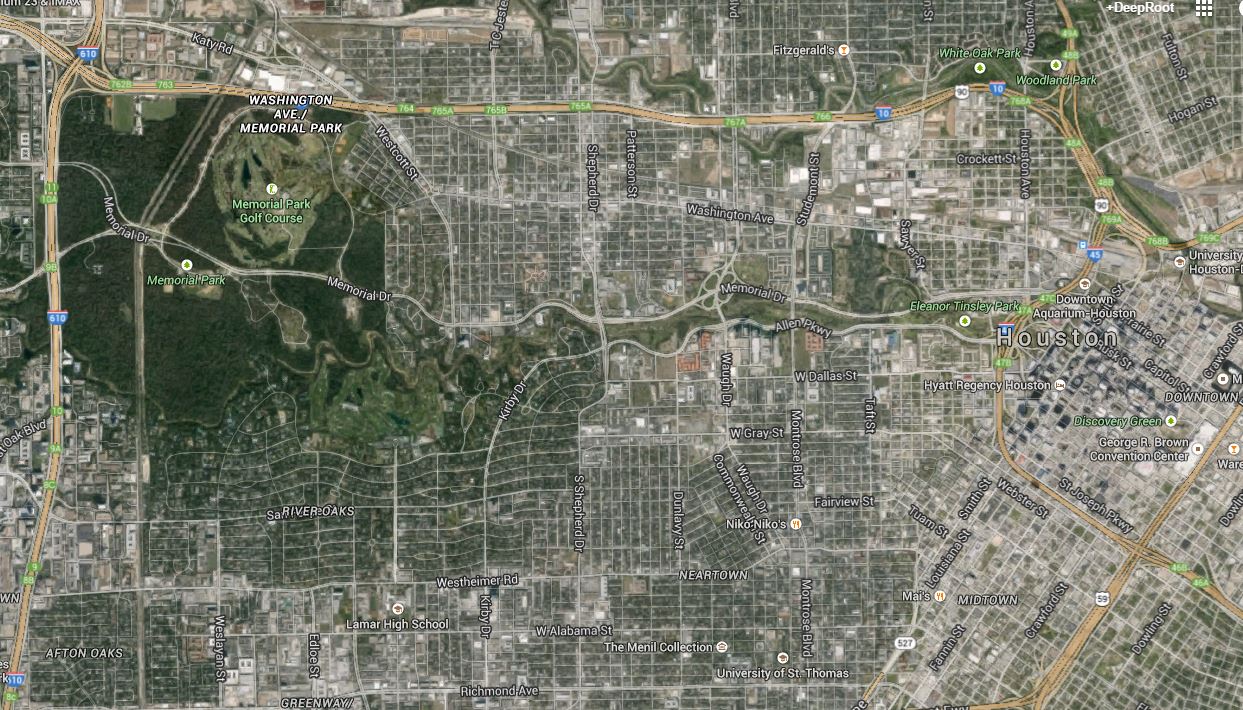 Just a week earlier I had been in Houston, speaking about using trees in general and street trees in particular to clean stormwater. Mickey Merritt of Texas Forest Service in Houston brought me to see the city’s largest green space, Memorial Park. There was a super-canopy of 100 foot Pine trees that towered above all the other trees. We drove around to see what that 2011 drought/heatwave had wrought on Memorial Park… that day the mortality rate stood at 50 percent. Within a year, over 80 percent of those big Pine trees were dead and needed to be removed.

Imagine if stormwater, which is treated as a waste product, was diverted from the hard surfaces of downtown Houston to Memorial Park to irrigate those trees and clean that water? I have no way to prove it, but my best guess is half as many losses. Using stormwater to grow a large shading canopy in hotter and hotter Texas cities just makes sense.

On a recent trip to Houston in January I was astounded by the number and variety of power/telephone poles. Houston’s utility companies seem to have a particular fondness for draping every possible cable, wire and tube on these wooden poles. 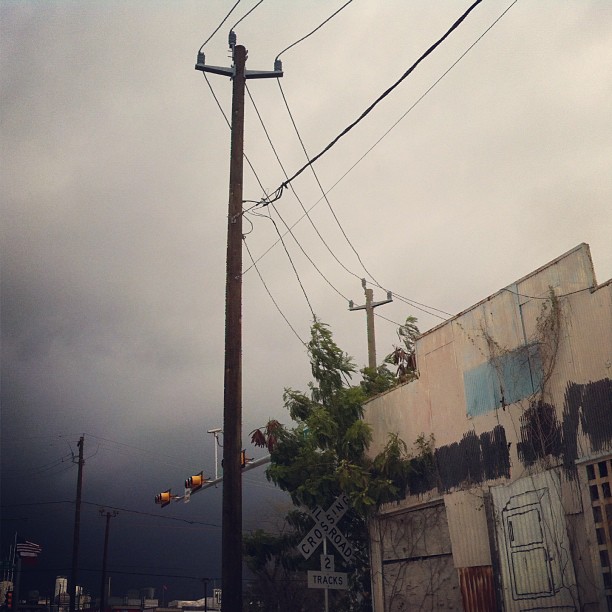 About 12 years ago, us Kestrels worked on some of the sites for the new Texas Rio Grande Birding Trail. The big idea was to go to sites where the birds already were – birding hotspots, really. The trail was then organized around these little slices of bird heaven. Can you say Ecotourism? Mississippi and Louisiana soon followed with birding trails of their own.

I can’t explain how brilliant I think this Birding Trail idea is…..a huge thanks to Austinian Ted Eubanks. As I toured around Arlington, TX looking at champion and notable trees I thought, this state is so big and has so many great trees, let’s have some Texas Tree Trails!

4. A large side of giant live oaks

On a 50F January evening in Houston, I sat under the spreading branches of two giant Live Oaks (Quercus virginiana) that were 400 years old. I was talking with a few tree friends and we were all admiring the oaks. Both trees had a DBH of over 50 inches. For fun, I stepped out the radius of the tree canopy, from its trunk to the end of its outermost branches: 125 feet. Unsure of my first measurement, I back checked, this time for canopy diameter: 245 feet.

So where did we have to trek, to see these great trees?  To liven up the story, part of me would like to tell you that we had hiked many miles in remote and undisturbed woodlands. But no, we were sitting at a table and chairs on a deck suspended above the two oaks’ root systems, eating exceptional burgers, just off one of Houston’s oldest streets. The spreading branches in several places were supported by gigantic concrete cradles. At the end of the branches was a small restaurant that was built on posts and beams, also suspended above the root systems. 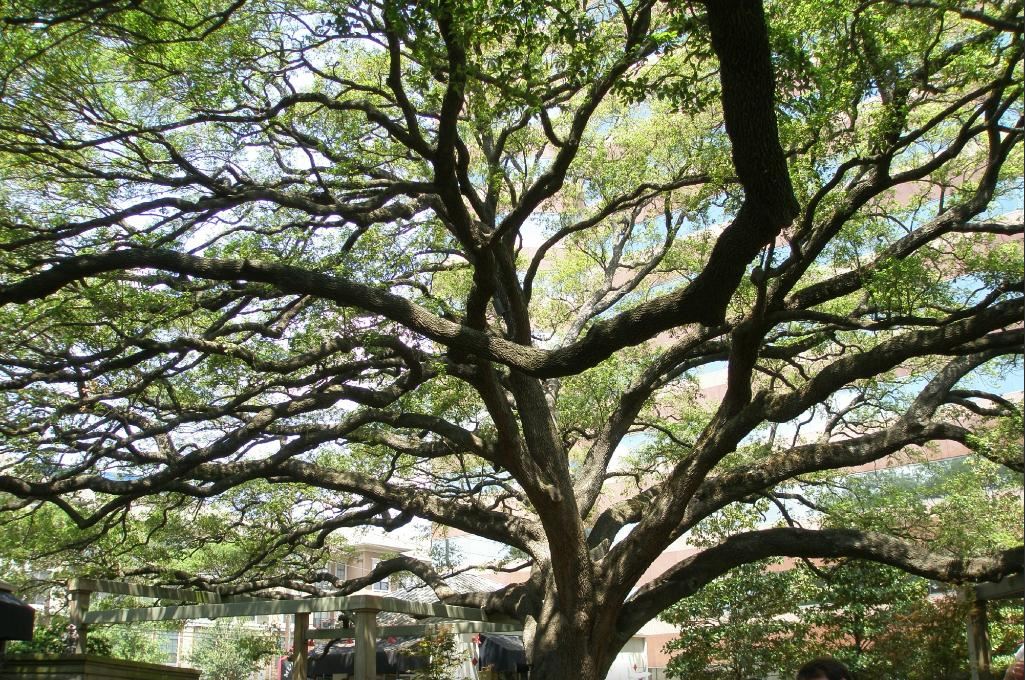 The owner had bought that block and put the trees first. He had the restaurant built so that the roots were safe and the trees could live. What have we learned here? Large, even giant trees can live in the heart of the city if their roots are in un-trampled, real, air filled soil. Anyone who says we can’t grow large trees in cities is just making excuses; go visit Becks Prime on Kirby and Westheimer in Houston Texas, and see for yourself!

There’s a small pond in Grand Prairie’s Central Park. Standing about 50 feet from the shoreline is a 25 foot Weeping Willow tree made of stainless steel rods & black Mother-of-Pearl leaves – 80,000 hand cut and polished leaves. The artists are Andy Cao and Xavier Perrot. The sculpture a beautiful blend of craft and art on a landscape scale. 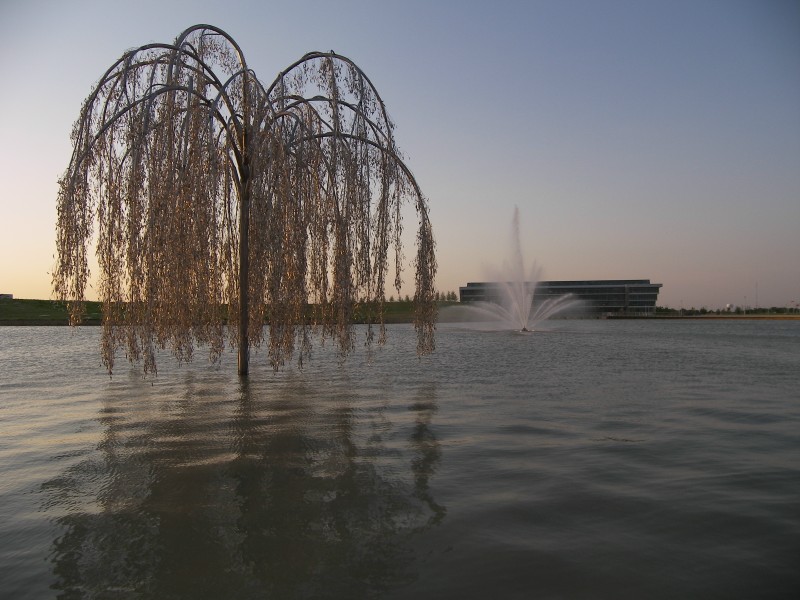 Because of the gray weather on the day I was there, the overwhelming silvery color of the sculpture was very muted. The ethereal shimmering Mother-of-Pearl leaves are breathtaking, and so is its price at $400,000! The entire cost was covered by a private donor. Here’s the challenge for all us landscape architects: let’s spend as much money on real trees as is spent on artistic abstractions of them.

Courtney Blevins with Texas Forest Service and Texas A&M University recently gave me a list of Dallas-Ft. Worth Champion Trees. I managed to see three Regional Tree Champs all in a single afternoon, all in the suburb of Arlington, TX: a Post Oak, a Willow Oak and a Paper Shell Pecan. The Pecan is on a gated street, but I got to see it through a hole in the fence. It seemed to have been once part of an orchard. The Willow Oak was also very impressive. Its owner had a sign in front that said it was 18″ tall when it was planted in 1973. Take a look at its picture now, at 42 years old. 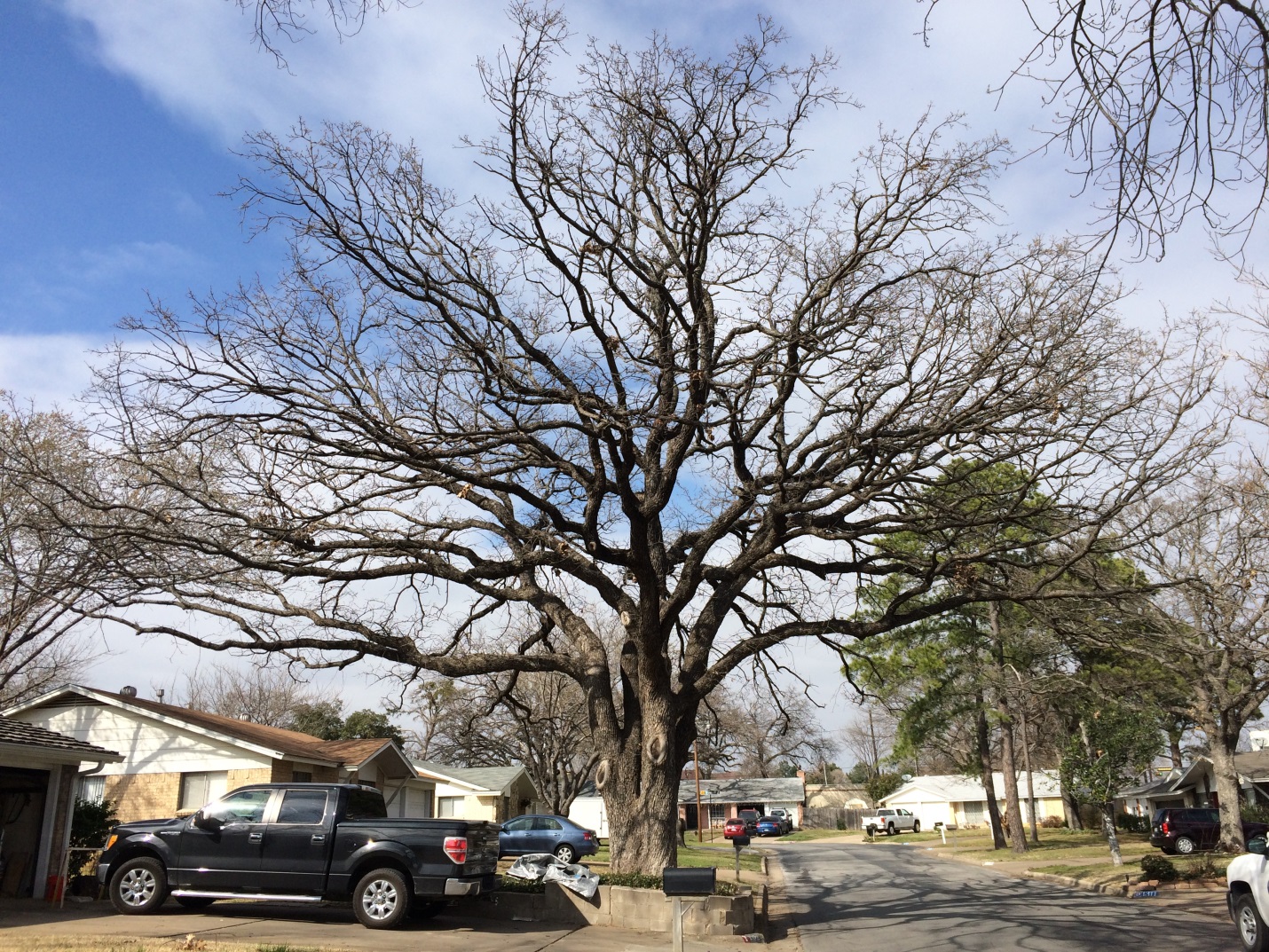 All three of these trees were inside a five mile circle, which led me to assume that Arlington doesn’t have the same heavy black clay soils as the Dallas-Ft. Worth area is famous for. Courtney confirmed that Arlington has the only well-draining soils in the area.

On Valentine’s Day 2015, two large Live Oaks were transplanted to the famous Toomers Corner at Auburn University (I know it’s in Alabama, but bear with me). These two new trees were replacing a very large Live Oak that was “TP’d,” or rolled with toilet paper, after every Auburn football win. It was poisoned in 2010 when an Alabama-crazed college football fan dumped fatal herbicide on the tree’s roots after his team had lost to Auburn. Now, Auburn has received the Phoenix prize, the resurrection of Live Oaks at Toomers Corner. Barring any unforeseen future football fans, these two new Live Oak trees have the soil conditions to grow out 2-4 feet per year, and up 1-2 feet per year for the next 50 years, and to live for hundreds more.

On my first trip to Texas in 1989, my wife and I stopped by to see a different famous tree that had been poisoned: the Austin Treaty Oak. This tree was huge, the largest I had ever seen, and the last surviving tree of the former 14 Council Oaks. At that point, it was surrounded by a protective fence and had not lost any of its evergreen leaves. 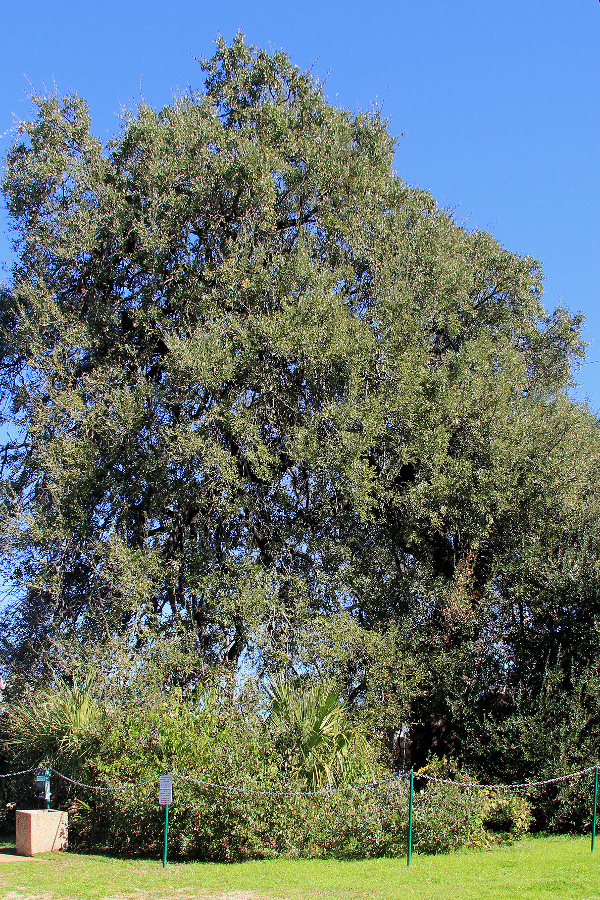 As branches died the city of Austin made salami-thin discs of these deceased branches to raise enough money to try and save the tree (this was before Ross Perot made a ‘blank check’ donation to save it). Through extreme efforts of soil replacement and tree root treatments by many Texas Arborists, the Treaty Oak – while reduced in size – was saved. It was a heroic effort. I still have my picture frame with the Treaty Oak branch slice on the wall of my office. It reminds me of lots of things, but most importantly ignore the destructive tree boneheads, keep planting trees, and adding lots more soil to those tree roots.  Go Texas Trees!

Thank you to Sue Henson, Laura Miller, Melinda Adams, Mickey Merritt, Patrick Brewer and many, many other Texas Tree people who have brought me down to Grand Prairie, Waco, Houston and Dallas/Fort Worth over the last 5 years to talk growing big trees in Texas towns and cities. I have a soft place in my heart for you all.

L. Peter MacDonagh, FASLA is the head of Science + Design for the Kestrel Design Group.