Why Public Art Should Make Us Rethink Trees 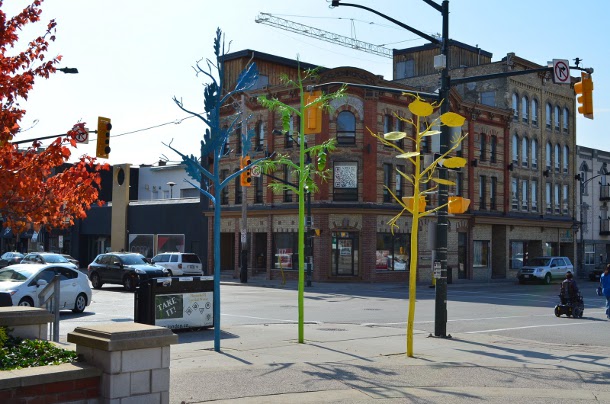 For the last two weeks of December I’ll be reprinting some of our favorite blog posts instead of putting up new ones. Today is the last one. Goodbye 2012, hello 2013! -LM

Trees are effortlessly artful. This artfulness may be part of why they have such a calming and restorative effect on people and can elicit such powerful emotional attachment.

Trees are also functional infrastructure. You can debate which role is more valuable, but from an economic standpoint, infrastructure usually wins hands-down. That’s one reason why recent installations of nonliving tree art in the city of London, Ontario is been particularly interesting.

Back in 2007, the Business Improvement Association (BIA) of London, ON proposed using some of their funds for a project in the downtown area. They wanted to commission a local artist to create metal tree sculptures. The city, which didn’t have a formal approval process for public art, had to route the idea through the city administrator’s office for approval, and the request – again, funded entirely by the BIA – went through.

City Forester Ivan Listar and staff from Parks, Planning and Design looked at potential downtown sites for these sculptures and identified locations where the city wasn’t likely to plant trees anyway due to site limitations like constrained planting areas. (This was before they knew about modular suspended pavement solutions.)

About 42 of these colorful tree sculptures, mostly representing Carolinian hardwoods like white pine, beech, oak and birch, were installed across the downtown. They are maintained by the Business Improvement Association, and can be removed by the city for any reason.

Looking at the sculptures, it’s easy to see that they’re not meant to be exact representations of trees. They’ve got skinny, pole-like trunks and patchy, sparse “canopies.” They don’t have any of the softness, movement or inviting qualities of living trees. According to Listar, while they overall appear be popular among visitors to the downtown, there are some differences in opinion in how people feel about them. “Some people call them trees,” he said, “but I call them sculptures.” Some of them do look a bit sad. 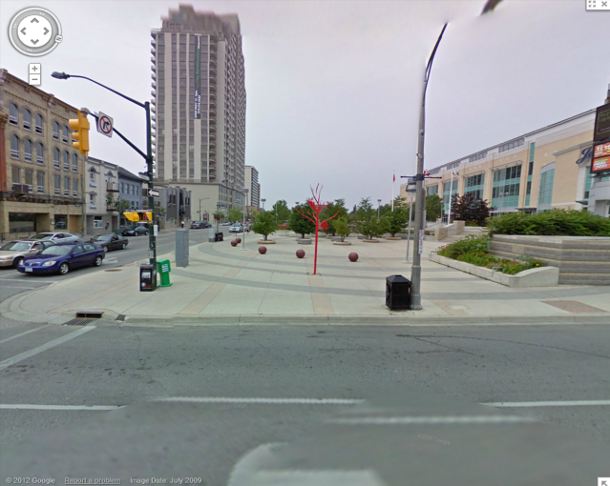 Let’s come back to the economics of trees as art and as infrastructure once more. These sculpture-trees cost about $6,000 (Canadian) apiece. Many people would balk at spending that amount of money on a tree, but are very willing to spend it on art – even, in this case, art that is close to a literal substitute for the real thing. For the same $6,000, you could install a real tree in 15 cubic meters (529 cubic feet) of soil using Silva Cells. And you would get a real, living, breathing tree out of it.

When comparing the cost of planting living trees in proper soil volumes versus installing inanimate tree sculptures, why do we have such inconsistent attitudes toward cost?

Much of it, I think, simply has to do with ingrained, outdated, or simply incorrect assumptions about the relative value of different elements of the streetscape, and part of it probably has to do with our pesky magical thinking as well. In this instance, I think London’s BIA may have inadvertently proved just how achievable it is to plant street trees and provide them with adequate soil. Trees that with proper care and maintenance should live for many, many decades, and pay back their communities many times over in both aesthetics and function.

If the city can secure the funding, they plan to replace three of the metal trees at the intersection of King Street and Talbot Street with one large specimen tree. While some people are surely fond of the sculptures, it’s hard to imagine that many would prefer them to actual trees. As new solutions for planting trees in constrained downtown areas become available, these previously unfriendly areas can now become sites for more street trees. These are living art forms unlike any other.

Ivan Listar describes the BIA as strong supporters of the tree planting program, but BIA funds have never gone toward planting actual trees. This is a little surprising, given all the evidence supporting how great trees are for business, but it may be about to change. Listar is currently leading the development of a downtown tree planting strategy for London, and they’ll be looking at various sources of funding – including public-private partnerships.