Why are Cities Using Green Streets for Stormwater Management?

Urban stormwater management and surface water quality protection is a decades old field of science and engineering. Engineers in the field are largely focused on mitigating the impacts of impervious surfaces like roads, sidewalks, parking lots and rooftops in urban areas to protect aquatic habitat and species, reduce drinking water treatment costs, and comply with state and federal environmental regulations.

As the world’s population grows and urbanization increases, protection of water resources from urban runoff and associated pollutants like sediment, nutrients, metals, pathogens, trash, and hydrocarbons is a constantly growing challenge. Fortunately, the tools and approaches used by engineers to control stormwater and provide water quality treatment are evolving to meet watershed restoration goals and new regulatory requirements. Increasingly, bio-engineering approaches like Low Impact Development (LID) and green infrastructure (GI) are being proposed as methods to mitigate the impacts of urbanization.

They do this by mitigating the impact of urbanization by capturing and treating stormwater at the source using LID and GI use stormwater control measures (SCMs) like bioretention, permeable pavements, underground storage facilities, and street trees to intercept, store, infiltrate and filter runoff before it is released to the storm sewer network. Many cities are taking LID and GI to the street corridor or municipal right-of-way in the creation of green streets, and for good reason.

In the U.S., eight (8) major cities have formalized Green Streets programs, including New York City, Philadelphia, Portland, Seattle, Los Angles, Washington DC, Cincinnati, and Milwaukee. Since 2007, New York City alone has created 80 new green streets a year, and plans to continue this pace through 2017. With this rapid increase in the number of implemented green street projects across the U.S., it is important to understand why cities and engineers are embracing the approach as a primary tool for stormwater management and how well they are functioning. 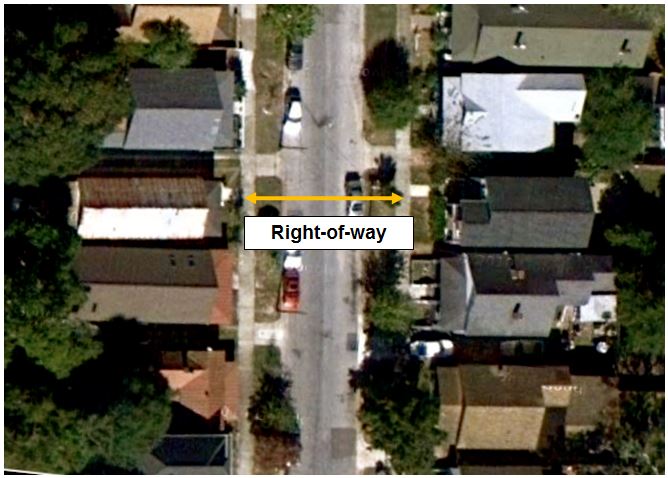 Street corridor or “right-of-way” from sidewalk to sidewalk

The first and perhaps the most important reason to use GI in the right-of-way is incredibly practical: municipalities own, manage, and maintain the street corridor from sidewalk to sidewalk, which also makes up the overwhelming majority of impervious surface (roadway, sidewalk and plaza area) under municipal ownership. For example, in Philadelphia streets and roadways make up 38% of all impervious surfaces that are owned and maintained by the city. Cities tend to start retrofitting with land or parcels they own if they want (or are required) to implement GI or LID, which makes the right-of-way an even more attractive place to construct SCMs.

The science of stormwater, urban hydrology, and municipal infrastructure is also a strong argument for use of green infrastructure in the right-of-way. Streets and roadways are directly connected to the storm sewer network: when it rains, the runoff that’s generated flows into a catch basin and is discharged through a pipe to the nearest river, lake, or bay. There is no opportunity for the runoff to flow over land for natural treatment and infiltration, as would happen in an undeveloped landscape. These directly connected impervious surfaces generate far more stormwater runoff volume and pollutant load than impervious areas that are allowed to flow over a vegetated surface before entering the storm sewer network. There is great potential for reducing stormwater runoff volumes and pollutant loads by incorporating permeable surfaces and vegetated areas within the right-of-way.

CSOs discharge more than just stormwater during an overflow event – industrial wastes, human waste, and other pollutants that must be treated at a wastewater treatment facility are also discharged. The U.S. Environmental Protection Agency (EPA) requires cities with combined sewer systems to reduce pollutants during a CSO event “to the maximum extent practicable” and maintain the “implementation of a long term CSO control plan.” This effectively means cities must constantly be proactive in reducing the volume of stormwater in the combined system. There are more than 9,000 permitted combined sewer outfalls in the U.S., and many of the cities that hold the permits have realized that controlling stormwater through GI and green streets can help reduce the frequency and volume of overflow events, keeping them in compliance with the EPA’s mandate.

Finally, Green Streets can provide more than stormwater management solutions, and have potential to build on the concept of a “complete street,” which the National Coalition for Complete Streets has defined as:

Complete Streets are designed and operated to enable safe access for all users, including pedestrians, bicyclists, motorists and transit riders… Complete Streets make it easy to cross the street, walk to shops, and bicycle to work. They allow buses to run on time and make it safe for people to walk to and from train stations.

The potential impact of green streets for stormwater management is enormous, and the types of projects they’re suitable for is vast. Engineers can incorporate green streets for stormwater management into corridor redevelopment projects, urban greening, and beautification projects to help cities integrate water quality and regulatory compliance with pedestrian access and safety, traffic calming, multimodal transportation, enhanced community livability, urban greening, aesthetic improvements, and better air quality – all of which ultimately leads to more livable cities and communities.  That’s something we can all get behind.

Jonathan Page is an Extension Engineer at North Carolina State University where he specializes in water resources engineering and ecological restoration.