What’s the Point of Non-Point?

Answer: What’s the point of non-point? The point is clear once we realize we’re talking about pollution.

Non-point source pollutants are water contaminants that don’t come from a pipe, well, construction site, or any other well-defined, specific source. They come from a diffuse source of contamination originating in many possible locations. A pointed example is fertilizer from farm land. Let’s say the landscape gets a three-inch rain right after local farmers fertilize their fields. Much of the fertilizer may flow into streams and other surface waters, making the fields in that landscape a non-point source of pollution. 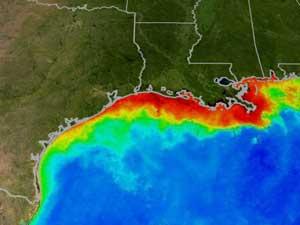 More to the point is that many pollutants can come from non-point sources. In fact, non-point source pollution, according to the EPA, is the largest type of water pollution, making a little less than half of our surface waters too polluted for swimming.

What are some of the pollutants that commonly damage water quality? Sediment from soil erosion, petroleum leaks from cars, heavy metals washed from roadways, farm chemicals, household chemicals dumped into storm drains—these are all non-point sources.

Maybe the best example is the “dead zone” in the Gulf of Mexico. As the Mississippi River deposits its nutrient-polluted water into the Gulf, oxygen in the water becomes depleted and aquatic life is severely stressed. Dead zones are becoming more prevalent around the globe and are testament to the effect of non-point source pollution.

The soil can be part of the solution or part of the problem. A soil that doesn’t hold nitrogen and phosphorus due to a lack of clay, or isn’t stable due to poor management, can be a non-point source. In other words, if fertilizer moves through the soil with a large rain, or the soil moves through erosion, then the soil is not only not helping, it is the pollutant.

But if soil is well-managed, then the damage is minimized. Forest cover holds the soil and farmers use conservation tillage to maintain the soil’s integrity. Or, if there is a wetland soil between farmland and a water body, the wetland can remove nitrogen and sediment from the water.

So the point is that non-point pollution is different than point pollution and, more pointedly, the soil can play a significant role as a source or salvation.