A previous blog entry, Healthy Soils for Healthy Trees, discussed the importance of preserving soil structure from being destroyed by compaction. Together, soil texture and soil structure have the greatest influence on pore space in soil, and how easily air, water, and roots can move through a soil. Many people are aware of what soil texture – proportions of sand, silt and clay – they are dealing with on a site. Few people consider a soil’s structure, though, even though in most soils, the structure is just as important as the texture. Two soils with the same texture can behave very differently depending on their structure. A clay soil, for example, can be easy for air, water, and roots to move through with good structure, or be almost impenetrable by roots, air, and water when its structure has been destroyed by compaction.

Soil structure refers to how particles of soil are grouped together into aggregates (also called peds). They are cemented or bound together by physical, chemical, and biological processes.

Factors that can deteriorate or destroy soil structure include, for example:

A high proportion of sodium to calcium and magnesium causes clay particles to repel each other when wet, so aggregates are dispersed and the process of soil structure formation is reversed. Soils with too much sodium become almost impermeable to water because the dispersed clay and small organic particles clog up remaining soil pores (Donahue et al 1983). Excessively high sodium levels can result from irrigation and salting roads.

Soil structure is classified by type (shape), class (size) of peds, and grade (strength of cohesion) of aggregates. The shape, size, and strength of aggregates determine pore structure, and how easily air, water, and roots move through soil (Donahue et al 1983).

Figure 1 shows the different types of soil aggregates, and how easily water typically moves through each of these types. 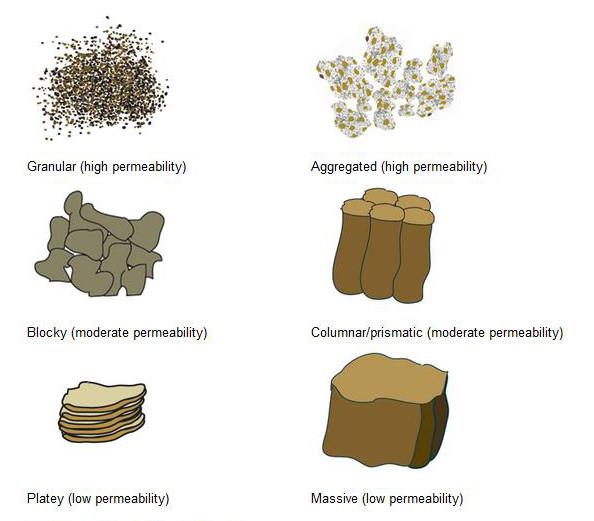 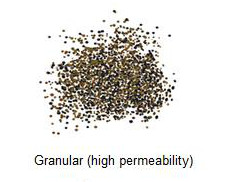 Columnar structure is often found in soils with excessive sodium, due to the dispersing effects of sodium, which destroys soil structure, rendering the soil effectively sealed to air and water movement (Cooperative Soil Survey, no publication date given). 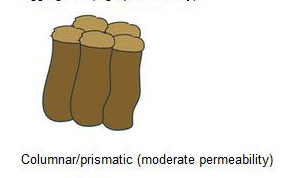 Platy structure has the least amount of pore space and is common in compacted soils (Cooperative Soil Survey, no publication date given). 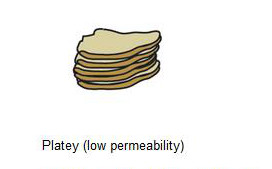 Some soils have no true structure, like single grain soils (like a loose sand with little to no attraction between the grains of sand), and massive soils (large cohesive masses of clay). 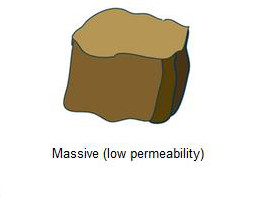 For more information on soil structural classification, see the resources listed in the references section below.

Other key practices to preserve soil structure include eliminating soil screening and minimizing handling, and avoiding the use of sodium salts.

Preserving soil structure may increase the range of soil textures acceptable for bioretention. Bioretention soils are often sand-based, primarily to ensure adequate infiltration rates. Clay and silt content is often limited to a maximum of only 3 to 5 percent, which is very, very low, limiting soils to sands according to the soil textural triangle. While a clay soil that has been screened and has no structure will have a very low infiltration rate, with proper structure, many soils with more clay can also have adequate infiltration rates. Increasing clay content above the very low maximum of 3 to 5 percent could provide important benefits, including increased soil water holding capacity and increased cation exchange capacity, which increase potential pollutant removal. When increasing clay content, however, keep in mind that the higher the clay content, the more crucial it becomes to protect soil from compaction and from excess salt, as clay soils are more prone to compaction and loss of structure, and unacceptable decrease of infiltration rates due to dispersion from sodium ions.