Is Soil Renewable or Non-Renewable?

Q: I recently got into a conversation with someone who claimed soils are a renewable resource because the nutrients in them can be replaced with fertilizers. But I’ve heard that soil takes a really long time to form, so that to me makes it non-renewable. What’s your opinion?

A: The idea that soil is renewable because nutrients can be replaced is very limited in scope, only addressing crop production. This perspective does not consider how soil forms, or that it’s much more than just a medium for growing plants.

However, I am not a fan of the renewable/non-renewable dichotomous classification system. I prefer another category for soil: slowly-renewable. But that comes with caveats related to the factors of soil formation: climate, organisms, relief, parent material, and time. 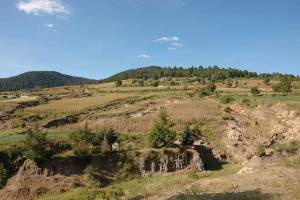 Whether soil is renewable or non-renewable is really more a question of how long it takes for soil to rebuild and recover after a disturbance, such as the erosion pictured here in the central Mexican Highlands. Photo: CIMMYT

In the renewable/non-renewable discussion, time should be defined. Are we talking about a growing-season (important from a nutrient perspective), lifetime, centuries, millennia?

I know of no soil scientist who would agree that soil is renewable simply because nutrients can be replaced. I doubt few would even consider soil renewable within a lifetime, though under ideal conditions, much recovery can occur.

So, the question becomes: How long does it take for a soil to recover from erosion, long-term tillage, compaction, acidification, salinization, etc.?

A soil’s ability to recover depends on the climate; soils in humid regions have the potential to rebound more quickly than those in semiarid and arid regions. Plants grow and die, organisms decompose the plant roots and residues, and in this way organic matter in the soil increases. In dry regions, there is little water to allow plant growth, so everything happens more slowly.

Another factor is relief. Soils on stable landscapes—uplands or lowlands, gently sloping to level—will be more likely to recover than soils on slopes. Water running downslope erodes soil and deposits it at the bottom of the hill, or carries the sediments into streams or rivers and degrades water quality. Even in natural, undisturbed landscapes, the least developed soils occur on slopes.

This is the stuff in which a soil forms. Coarser materials (sands) tend to have more rapid soil development than finer materials (clays and silts). If the soil is forming over bedrock, the process is even slower. If erosion removed the soil to expose the bedrock, that area may not be renewable for millennia.

Some types of degradation can be managed to maintain productivity. Other kinds of damages may be irreversible. For example, acidification is common in humid regions or old soils, but is often managed with the addition of ground limestone products to raise the pH for crop production.

Salinization is the process of salts accumulating in a soil. It’s often related to irrigation, but sometimes occurs in lands adjacent to rivers in dry regions. Once soil becomes salinized, the only thing that will leach the salts out of the soil profile to make it productive again is good quality water. When that is not available from an aquifer or a river (often because dams and reservoirs control floods so that water no longer covers the floodplain), the only other possible source is precipitation.

But precipitation is often not plentiful in many regions and water is not renewable in many places. Many arid and semiarid regions experience limited precipitation and river flow, degraded surface water quality, among other factors. Many of these regions instead use water from deep, underground aquifers with little or no recharge. This “fossil” water was stored at the time of the last ice age. When the aquifers are depleted faster than they are recharged, water is not renewable therefore can’t be used to renew soil.

The bottom line: All natural resources are valuable, and should be managed well to insure they will be available to future generations.