Trees That Can Tolerate Standing Water

My window looks out on 9 Mile Creek, a rural looking creek in an urban/suburban environment in Minneapolis/St. Paul, Minnesota. In the six years our company has been here, this is the closest I’ve seen water come to the parking lot. For a number of weeks this spring and summer, the large ash trees on the 100 year floodplain were in standing water between one foot and three feet deep.

Below is a graph of Minnesota’s precipitation for the first half of 2014. Minnesota’s long-term annual average is 32.6 inches – as you can see we are almost there by June and the two wettest months of the year (July, August) have not yet passed. 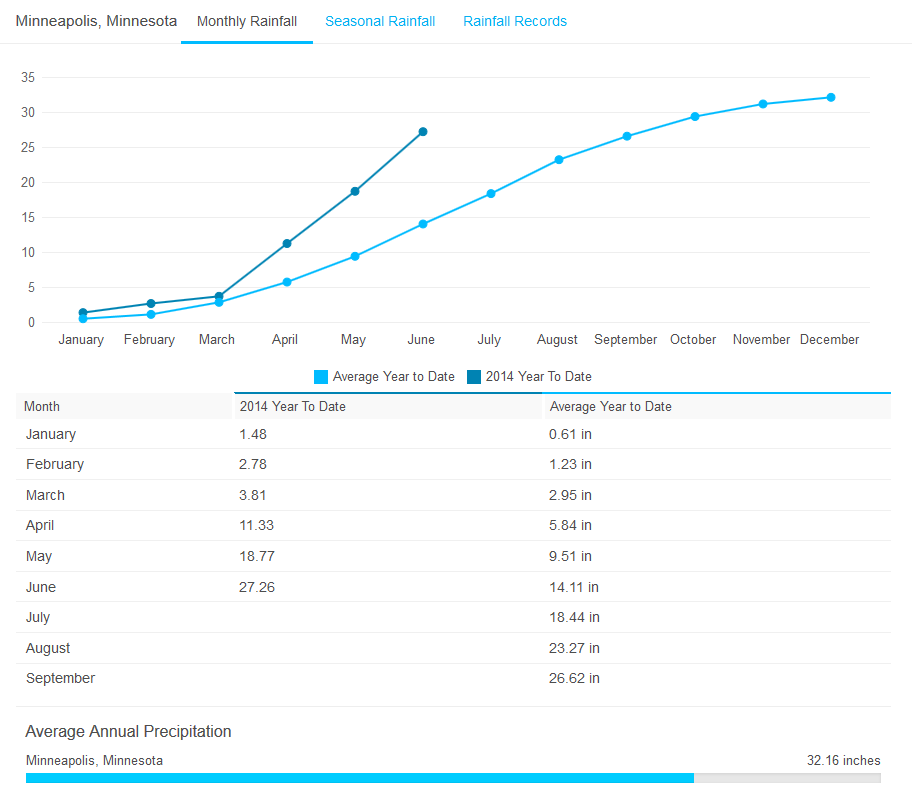 A map from the early 2000s from the EPA predicted increases in very heavy precipitation (big storms) throughout the United States. The Northeast is predicted to have a 67 percent increase! Another map (looking like a patchwork quilt) from National Oceanic and Atmospheric Administration (NOAA) shows that most of Minnesota has had an increase in precipitation by up to 20 percent since 1900. The same increase or more is seen in Indiana, Michigan, northern Illinois and the northeastern United Stations. All but two patches of the Eastern United States (Central Florida and Central/Southern Appalachia) have had a 10 percent increase in rain. Minnesota and the upper Midwest are predicted to have a 33 percent increase in these larger storms. I think now is a good time to make a list of trees, shrubs and vines that can tolerate standing water 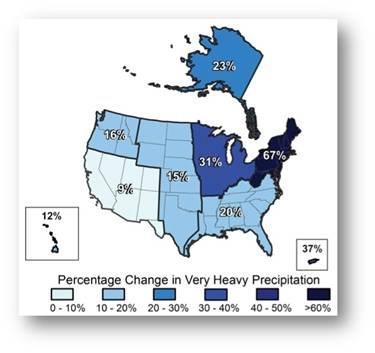 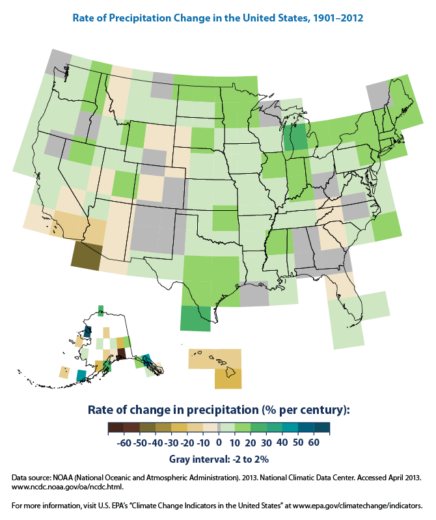 Here are plants that I have seen with my own eyes growing in standing water (<3′) for weeks at a time and surviving well. Most were in a natural condition, but I also witnessed a few with long flood durations in urban settings. The list is Midwestern and Eastern North America centered, pretty much east of the 100th meridian. Most of these trees and shrubs are hardy into USDA Zone 5, but notably not Red Mangrove (USDA Zone 10). There are other folks who have seen different trees in standing water, so it’s not comprehensive, but these are ones I can personally vouch for. This is qualitative not quantitative data. Some of these trees are not native, or are weak wooded with bad branch attachments. Many are light on aesthetics; Gary Johnson, Extension Professor in urban forestry at the University of Minnesota fondly describes some of them as “Junkyard Dogs.” I don’t get to use that phrase nearly enough.

Quercus macrocarpa -Burr Oak (Hard to believe, but there it was)

Acer negundo – Box Elder (right now it has been in standing water for weeks, outside my office/Kestrel on 9 Mile Creek)

Sambucus canadensis – American Elderberry (right now it has been in standing water for weeks, outside my office/Kestrel on 9 Mile Creek)

Climate change scientists have shown that the largest fluctuations in extremes are occurring in the Northern Hemisphere in the northern temperate and boreal climates. Currently south central Minnesota, where the twin cities of Minneapolis-St. Paul are located is experiencing one of the wettest years ever. A few people (me included) are interested in these statistics, because there is a pattern here in Minnesota: Winter 2011 was our mildest in decades; Spring 2012 was our earliest spring in 50 years; Summer 2012 had a prolonged drought; Winter 2012 was long and the coldest in 20 years; Spring 2013 was much wetter than average; Summer 2013 was a record breaking drought; Winter 2013 was the coldest in 40 years and the snowiest in 20 years, and Spring 2014 was our wettest ever. If I was a betting man I would say that the pattern is more extreme versions of each season: wetter springs, colder winters, drier summers and rosier red falls.

My advice is to become familiar with trees that can tolerate wet conditions. We’ll all be needing them.