Thanks to widespread efforts to raise awareness of the large declines in bee and Monarch butterfly populations, most people are aware of the need to protect pollinators.Â  Monarch butterfly populations have declined 90% in the last 20 years. Bees and other pollinators are in trouble too. Primary causes of the drastic declines in pollinator populations are thought to be habitat loss, invasive species, parasites, pesticides, and genetically engineered crops.

Without pollinators, we would not have much of the food we eat. According to the USDA â€œOf the 1,400 crop plants grown around the world, i.e., those that produce all of our food and plant-based industrial products, almost 80% require pollination by animals… In the United States alone, pollination of agricultural crops is valued at 10 billion dollars annually. Globally, pollination services are likely worth more than 3 trillion dollars.â€

Douglas Tallamy, an entomologist, professor, and author of â€œBringing Nature Homeâ€ and â€œThe Living Landscapeâ€, compiled tables ranking native plant genera (woody and herbaceous) in terms of the number of butterfly and moth species recorded using them as host plants in the mid-Atlantic region of North America. The top ranked woody genus is Oaks (Quercus), which support 534 species. In comparison, the top ranked herbaceous plant is Goldenrod (Solidago), which supports 114 species. The top 20 woody species all support more Butterfly/Moth species than the top herbaceous species (i.e. more than 114)! Tallamyâ€™s full list is available here (as of February 9, 2016). Part of the list is also in Tallamyâ€™s book, Bringing Nature Home and online.

Granted, the number of species supported is not the only way to measure the value of a plant. The monarch butterfly, for example, doesnâ€™t care that Milkweeds only support 12 butterfly and moth species, while Oaks support 534. The Monarch only lays eggs on Milkweeds and its caterpillars only eat Milkweeds. Many butterflies need specific tree species or genera too. For example, the spicebush swallowtail caterpillar only feeds on spicebush (Lindera benzoin) and sassafras (Sassafras albidum), both native understory trees.Â  The zebra swallowtail only feeds on young pawpaw (Asimina triloba) leaves. The Pink-striped oakworm needs oaks (Quercus). The Rosy maple mothy needs maples (Acer). These are just a few of many butterflies and moths that need specific tree and shrub species or genera. Many native bees are also specialists that require a specific species or genus. Learning how many different pollinators need different species to survive once again highlights the importance of plant species diversity! 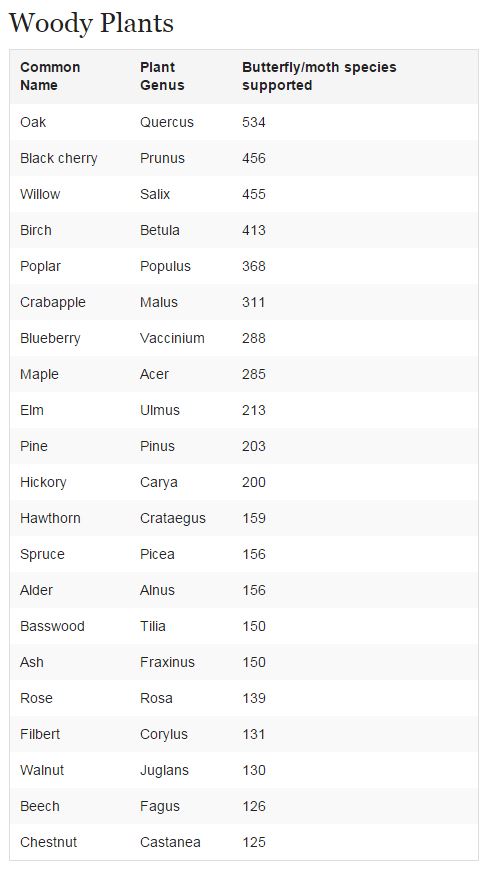 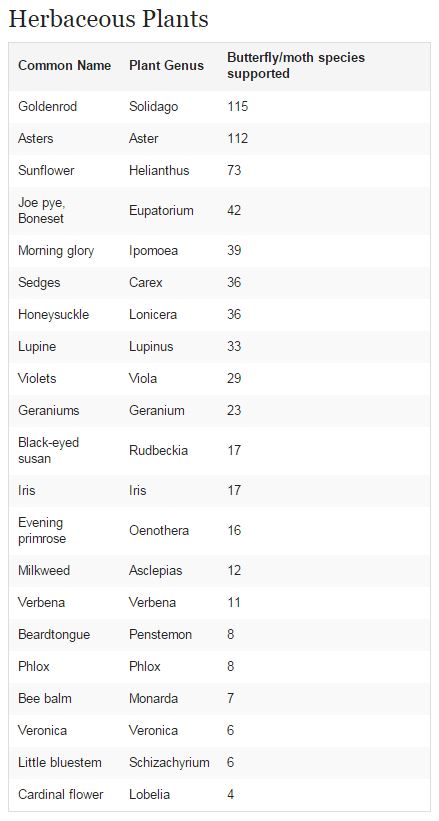 Equally important is not killing the pollinators after attracting them! Application of insecticides can have dramatic, often unforeseen, negative impacts on pollinators. For example:

â€œIn June of 2013, in a Target parking lot outside of Portland, Oregon, occurred what has been called the largest single, bee die-off on record. Biologist, Rich Hatfield, of the Xerces Society for Invertebrate Conservation, estimated that 50,000 wild bees were killed. Fifty-five linden trees had just been sprayed with dinotefuran (trade name Safari), by qualified technicians (it was a legal spraying). Dinotefuran is in a class of insecticides known as neonicotinoids (also called neonics). It was sprayed on the trees to control aphids. â€œThey [the aphids] donâ€™t harm the tree, but they secrete sticky honeydew thatâ€™s a nuisance,â€ explained Aimee Code, pesticide program coordinator for the Xerces Society. The trees were in bloom, and covered with swarms of feeding bees, looking for nectar and pollen…There were seven other such events recorded in Oregon, each one involving a neonicotinoid insecticide being sprayed on a blooming linden tree”(quoted from Wild Ones Journal, August/September/October 2015 Issue, bold added).

Oregon has since then made it illegal to spray blooming lindens with any product containing dinotefuran, imidacloprid, thiamethoxam or clothianidin (all neonicotinoids).

A diversity of healthy trees is more imperative for pollinators than most people realize. For people like me â€“ designers, or policy folks, or people involved in the landscape â€“ there is a huge opportunity for our work to reflect this knowledge. So the next time youâ€™re picking a plant palette for pollinators, remember to include trees!