Trees Are a Tool for Safer Streets

The World Health Organization reported in 2004, “Road crashes are the second leading cause of death globally among young people aged five to 29 and the third leading cause of death among people aged 30 to 44 years.” That’s a scary statistic. Rumble strips, speed bumps, and speed limits are a few of the traditional measures taken to reduce traffic speeds to safer levels, preventing crashes. It turns out that trees placed along streets can also play an important role in speed control. 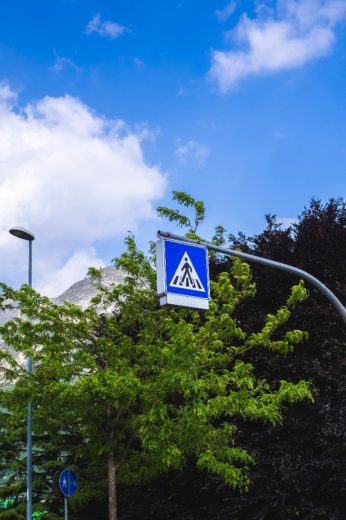 A 2006 study reported that using trees to line roadways reduced average speeds by up to eight miles per hour. A more recent study in 2019 found that a higher urban tree cover is associated with increased feelings of safety. In fact, the study states: “High coverage and dispersion of trees are needed for increased perceived safety.” An increased sense of safety is directly correlated with increased health and well-being. This is especially important in denser and low-income neighborhoods within urban areas.

Multiple studies have found that simply viewing nature in urban settings has a strong restorative and calming effect. These findings also have applications on the road, in particular for preventing emotionally charged confrontations known as road rage. A healthy roadside tree canopy can help offset angry and aggressive reactions by keeping drivers calm and reducing stressful responses. A 2010 report revealed that drivers who view nature as opposed to heavily built-up surroundings “reported feelings of relaxation.”

Trees may not be the right design solution for every site considering traffic-calming measures. However, they are an extremely effective and low-cost tool with potential applications across many urban settings. Unlike other traffic-calming devices, trees are multi-functional – in addition to helping make roads safer, they also increase property values, save energy, reduce flooding, and generally make our surroundings more comfortable and pleasant. We need to re-examine accepted assumptions about where it is appropriate to plant trees and develop street and road designs that utilize their powerful influence on human health and safety.

A 2006 study of 10 urban arterial and highway sites in Texas compared accident records before and after planting trees. Analysis showed a 46% decrease in crash rates across the sites after landscape improvements were installed.

Cyclists and Pedestrians Prefer Trees as a Safety Barrier

Trees are now being utilized as an infrastructure barrier between cars and cyclists or pedestrians. We can see this in several projects, but most recently with The Strand project in Liverpool. Creating a safe environment for pedestrians and cyclists who share the road with vehicles is essential in road design.

A recent 2020 study in Boston found that participants indicated a preference of sidewalks and cycling tracks with trees. In addition, trees between the cycle track and street/parked cars was the preferred location of urban trees. This helps block the perception of traffic and exposure to mobile source air pollution. This would also help create a perception of a cooler street. The author goes on to say, “mature trees better cool the city. Planting trees between the cycle track and the street would also better shade the street, lessening head island, and turn both sides of the street into wide shaded walking/biking promenades.”

These findings contradict conventional street safety guidelines that maintain that increased numbers of objects in the road-side and constrained rights-of-way will increase accident rates.

*A portion reprinted from an original article for Next American City