Unintended Consequences: Did Fighting the Mob Take Down Providence’s Trees?

When Shawn started working here, he mentioned that while he was in graduate school he had completed an assessment of Providence’s urban tree canopy, and promised to dig up the original document for us. And he did! (It’s a rough draft – we couldn’t find the final one – so ignore the occasional missing image or placeholder text). At the time that the document was written, the most recent statistics for Providence’s urban tree canopy (UTC) put it at 18 percent; Shawn and his collaborators focused on solutions for raising it an additional 7 points, to 25 percent.

The document makes a number of recommendations for ways to enhance Providence’s tree canopy. One of the most exciting for us to see – it’s like a love letter to us from the past – is a soil volume recommendation that is totally in line with the same recommendations we make:

It even takes soil sharing in to account! Keep in mind that this document is from 2002, five years below suspended pavement systems were commercially available.

Shawn told me another thing. He said that in the course of the project he’d worked with the Urban Forester for the city of Providence, who at the time was John Campanini. Shawn remembered John telling him that Providence’s canopy cover used to be much higher, but that it dropped dramatically in the 1970s when an overnight street parking ban was enacted that prohibited parked cars on the street between the hours of 1am and 5am. The hope, Shawn remembers Campanini telling him, was that the on-street overnight parking ban would help reduce crime and mob activity that resulted in stolen and abandoned cars being left on city streets.

(The origins of the overnight parking ban are hotly debated, and there are few records citing any reason for it. Some articles say it was instituted in 1929, but don’t state a reason or cite any official city documents or codes. Others attribute it to narrow streets, emergency vehicle access, and snowstorm protocol.)

What does seem clear is that the policy unintentionally had a devastating effect on the city’s trees. In addition to the overnight street parking pan, Providence also has a zoning ordinance requiring 1.5 parking spaces per apartment.  Due to these requirements, residents needed to make sure they had an adequate number of off-street parking spots. For multi-family homes in particular this presented a challenge. Owners needed to create spots from somewhere – and it appears that may have cut down their street and backyard trees to replace them with paved areas for parking. Doug Still, Providence’s current urban forester, told me that while there was no proven link between the overnight parking ban and the loss of tree cover in the city, unofficially that is how it appears.

“It seems obvious to me that the off-street parking requirement has led to all this pavement in backyards,” he said, and pointed out that South Providence – an area with the highest incidence of multi-family housing – is a part of the city where the tree canopy is the lowest. “Landlords need to be able to provide parking and they also tend to not care that much about maintaining green space, so the obvious solution is to pave every square inch of the property. Unfortunately, Providence has a built environment where the houses are spaced just wide enough to allow for driveways in between. This creates access to the backyard, which allows a truck to get in there to pave everything. I would argue that in places with traditional row houses that are close together, there is probably more green space because backyards are not accessible.” 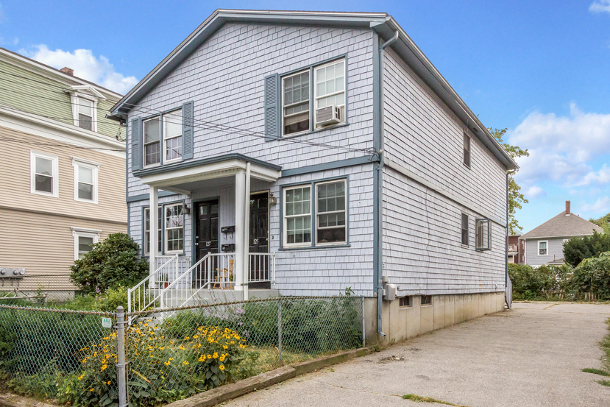 A wide driveway provides an access point to a paved backyard. Image: Planomatic

According to a 2006 Urban Tree Canopy study conducted by the city, in 1901 Providence had 50,000 trees. By the mid-1970s (no data is available in the interim), the number was down to 16,500. The next tree survey, in 1988, showed an increase to 22,320 street trees. In 2000, a preliminary urban forest cover analysis determined that Providence had an 18 percent UTC, and 60 percent of those trees were on private property, rather than in the public right-of-way or public parks. By the time of the 2006 report, Providence’s total land area has 23 percent UTC, but space for a maximum of 53 percent “possible” cover. These “possible” sites are located primarily in residential areas, making them “the best opportunity for increasing UTC.”

The city is intent on continuing to raise its canopy cover. Doug Still told me, “We’re trying to increase canopy cover to 30 percent by 2020 as many ways as we can – including preserving existing trees and planting new ones. We’re also trying to think beyond just right-of-way sites and to look at the whole urban forest – including people’s backyards.” This summer the city completed the first phase of a study of the whole urban forest that quantifies the benefits of Providence’s trees. This is different than past efforts – a street tree inventory or a canopy cover study using satellite imagery and computer mapping – “What we hadn’t done was to quantify all the benefits of the city’s trees. We completed the study using i-Tree eco on 250 study plots to measure ground cover, pavement, and the relationship of trees to buildings. Right now we’re in the data crunching phase, and we will have that report completed by the end of fall. It’s going to be included in an urban forest master plan. I think the data will help make the case that trees are not a luxury element of urban infrastructure.”

I was unable to confirm John Campanini’s story about why the overnight parking ban was instituted in the first place, but the city now allows residents to park on city streets overnight if they receive a permit. (Streets where 75 percent of the residents with state-registered vehicles have signed a petition are exempt). Bob Azar, the Director of Current Planning, told me “These days some cities are trying to reduce parking minimums in an effort to allow the market to decide if parking is necessary and where it’s necessary. Minimum parking requirements are a very suburban model of development where you’re trying to separate uses and make the developers responsible for providing parking to get cars off of the street. In a city, it’s appropriate to have shared parking, on-street parking, or no parking, depending on the demand.” An overall revision to the zoning ordinance is currently underway.

We’ll be taking the rest of the week off to celebrate Thanksgiving. See you back here on December 2nd.