In 2008 the City of Sunderland released their comprehensive Central Area urban design strategy, outlining their vision for revitalizing the city centre by improving pedestrian accessibility, creating a people-focused identity, enhancing the public realm, and bringing forward major regeneration projects that would help to attract investors and improve quality of life for residents, workers, and visitors. 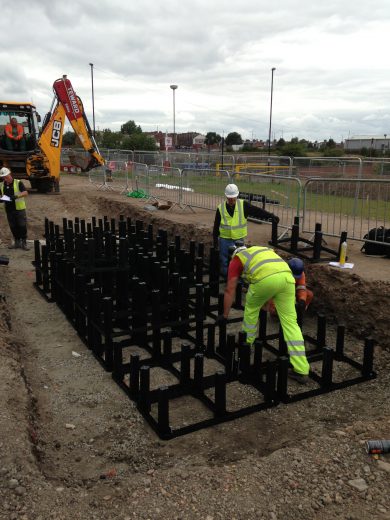 Soil is added to Silva Cell frames along St. Mary’s Way in Sunderland. 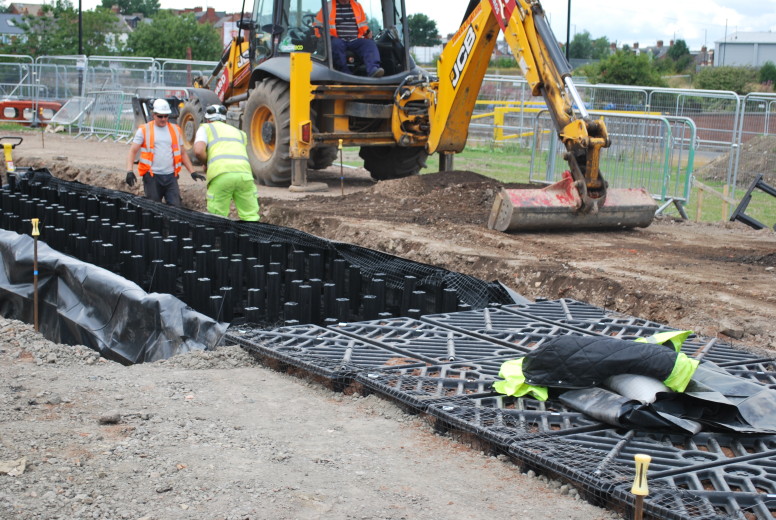 Soil is added to Silva Cell frames along St. Mary’s Way in Sunderland.

A major factor in realizing this vision was the City’s acquisition in 2011 of the old Vaux brewery site, a 28-acre brownfield that had been unused for the previous decade and was now primed for redevelopment as a new business district.  Central to this redevelopment project was the realignment of St. Mary’s Way, a 500m length portion of the city’s central ring road, to create a straighter and more direct route between the city’s retail core and riverfront to the new Vaux site. The realignment allows the road’s current path to transform from a traffic dominated highway to a pedestrian friendly, tree-lined boulevard.

Street trees play a significant role in the redevelopment aspirations of Sunderland, and especially on the site of St. Mary’s Way on the ring road. The Sunderland Central Area urban design strategy document states that “tree planting should be a priority along the ring road as part of its transformation into a ‘Great Street,’ ” referring to the impact street trees would have on increasing the vitality of the site and encouraging pedestrian activity, but without disrupting the street’s functioning as a key traffic route. 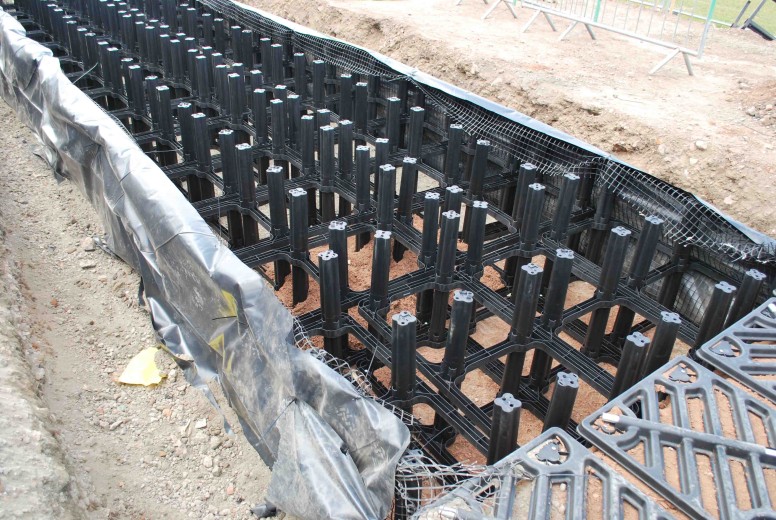 Three stages of the installation along St. Mary’s Way. Left to right: empty frames, frames with soil and strongbacks, and frames with decks added and secured. 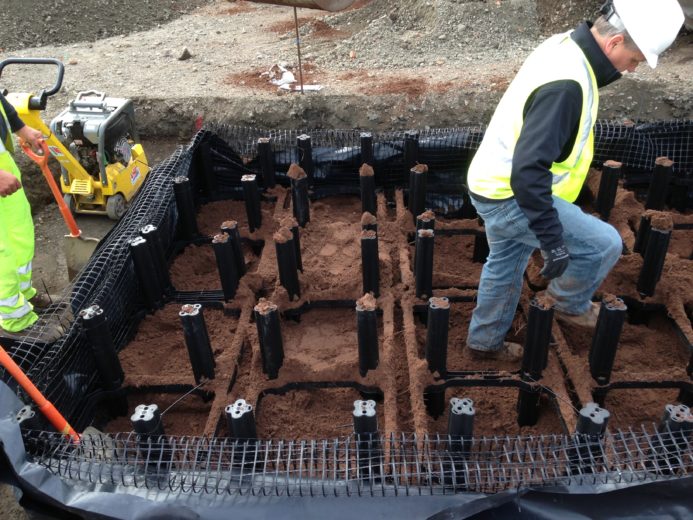 Compacting the soil from each lift.

Large specimen trees would help to attract businesses as much as pedestrians to the new development and gateway. But the City Council wanted not only to plant the trees near the roadways, but also to ensure their prosperity for future generations – having a goal for the tree planting scheme to be successful for at least fifty years.  Silva Cells were specified for the project in order to meet these needs.  James Gordon,  Senior Landscape Architect for the Sunderland City Council, was instrumental in the decision to bring the Silva Cell system into the project: “To assist us in delivering a new road realignment through Sunderland City Centre, DeepRoot played a key role in transforming the character of the highway network into a traditional tree lined avenue, allowing us to plant large specimen trees under footways and in close proximity to the road.” 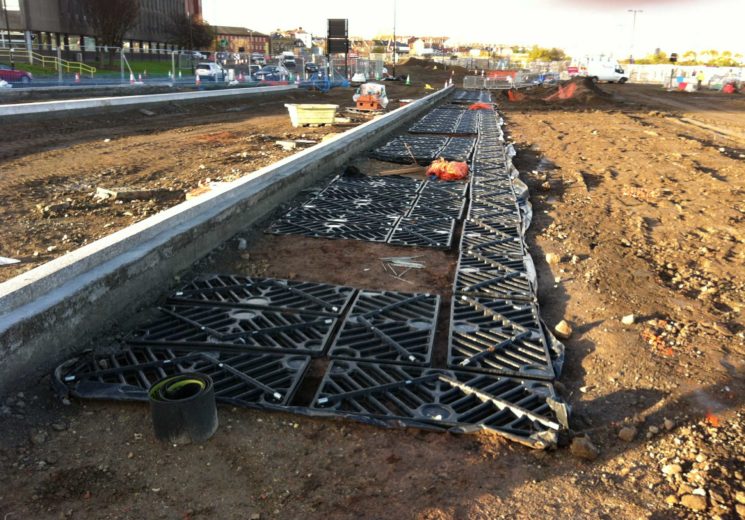 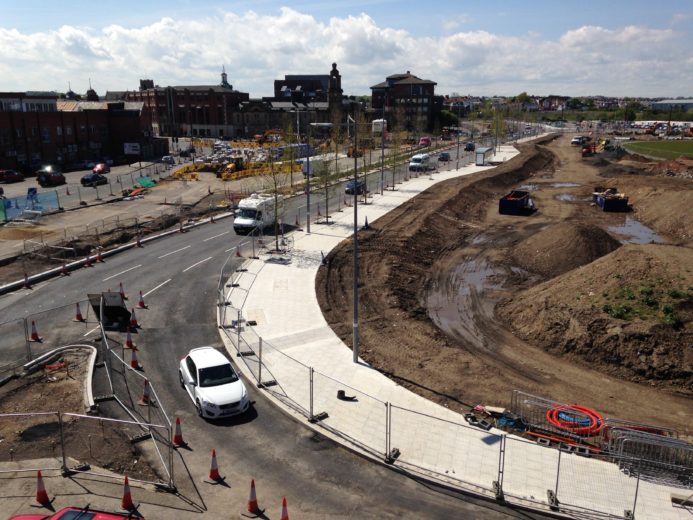 The Silva Cell installation at St. Mary’s way was completed in May 2014

Funded in part by £2.34million from the European Regional Development Fund and a further £2.5million from the Growing Places Fund, the realignment and enhancement of St. Mary’s Way is a landmark achievement in the realization of the City’s strategic vision for the future. According to James Gordon,  “The creation of this new ‘green’ boulevard is seen as a crucial element in meeting the aspirations of potential investors and encouraging development whilst becoming a welcoming and accessible city centre approach, enhancing links to the port of Sunderland and the future new Business Quarter.” The flexibility of the Silva Cell system also permitted Gordon and the design team to work with the existing utilities and other features of the site while still providing adequate void space beneath the road to give the trees access to the nutrients required for a long life. Gordon explains:  “In maximising the soil volume per tree whist providing suitable load bearing capacity, we are confident that we are giving the trees the best possible chance to thrive in this urban environment. DeepRoot’s design service allowed us to overcome complex constraints such as existing utilities, new surface water drainage systems and dealing with trees on such a large scale.”

And it is indeed a large scale: altogether, 1,772 frames and 866 decks were installed in a two layer system along the boulevard, bringing 16.18 m3 of soil volume to each of the 31 newly planted trees. Through this ambitious creation of a new, tree-lined pedestrian-friendly passageway, Sunderland’s vision of a vibrant and prosperous city centre is one tremendous step closer to realization.