Thoughts on Bio Char Part 1 of 3: History of Bio Char

Bio char, or terra preta, is one of the best, longest lasting soil amendments known to humans. This pyrolysed carbon is a soil amendment that can include surprising ingredients such as rubber tires, biosolids, and food waste, has gotten a lot of attention as a low-cost, ecologically sustainable solution.

A bit of history

Deep in Amazonia large tribes of Amerindian lived and farmed some of the poorest soils on earth, oxisols (tropical rain forest soils), for thousands of years. How did they manage to live, survive and sustain their tropical forests long-term in the face of very old, depauperate soils that leached their nutrients quickly? Their secret survival weapon was “slash and char” agriculture, turning about 50% of collected biomass into carbon soil. This technique is around 16 times more efficient at amending soil than the more commonly known process of slash and burn. At one time, about 10% of the Amazon, a tract of land about the size of France, was once covered with the original “Terra Preta de Indio.” 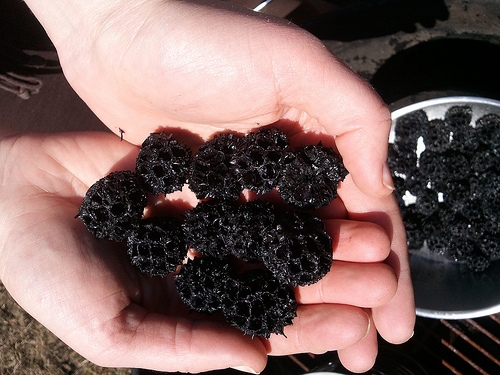 The Amerindians dug trenches or pits up to 6 feet deep and filled them with the cleared “slash” (biomass). The soil that had been excavated to create the hole was then placed on top and set on fire. Because of the high moisture content and lack of oxygen in the biomass, these fires would smolder for hours and sometimes days. The biomass would undergo pyrolysis and became carbon black charcoal. Annual cropping of corn, beans, etc. could then begin immediately on these bio char soils. This amendment has a lifecycle of between 800 and 7,000 years.

I have been gardening since I was about nine years old, and formally learning and practicing horticulture for some decades now. Over the years I have been exposed to most soil amendments known to our nerdy little subculture. Amendments that last for hundreds and thousands of years get my attention in a big way. In an agricultural/horticultural time span, this is deep time.

Part II: A Controversial Soil Amendment?
Part III: How It’s Made & The Future of Bio Char