Street Trees in Britain, A History – Interview with Mark Johnston

Mark Johnston is an independent scholar who holds a PhD in urban forestry from the University of Ulster. He has over forty years experience in the greenspace industry, including working as a tree officer in local government, consultant in private practice, university lecturer, and government adviser. Although originally from London, Mark is based in Belfast, Northern Ireland, where he has lived for the past twenty-five years. In 2007, he was appointed MBE by HM The Queen in recognition of his services to trees and the urban environment. In 2009, Mark became the first British person to receive the Award of Merit from the International Society of Arboriculture, the highest honour it can bestow for services to arboriculture and urban forestry. In 2011, he received the National Arboricultural Award from the Arboricultural Association.

Mark, what’s your background and how did you first become interested in street trees and garden and landscape history?

I’ve been an arboriculturist (arborist) for 40 odd years. In the early days of my career, I was working as a climbing arborist, taking down large, dead, and/or dangerous street trees. Then, I decided to get some further qualifications and became a tree officer (the US equivalent of being a municipal arborist/city forester) in London. There I was responsible for trees in two different boroughs and a large part of my work involved many miles of urban and suburban streets and their trees. This aspect of tree management was fascinating to me. Later, I took on more of an advisory role as a consultant on the national/government level and became very interested in the whole idea of street trees as green networks, bringing fresh air and wildlife into cities, and acting as green corridors along major roads going into urban areas. Obviously, when you’re managing street trees, particularly older trees planted in the late Victorian/early Edwardian era (late 1800s-early 1900s) you begin thinking about history of the trees and where and why they were planted. They are essentially heritage landscapes because of their age and cultural importance.

What led you to write the book Street Trees in Britain, A History?

In my first book – Trees in Towns and Cities – there is a chapter about street trees. I did quite a lot of research for that chapter and much of it didn’t make it into the book, enough to make me think there was an opportunity to do an entire book on the history of street trees in Britain. It hadn’t been previously researched in any great detail. I developed new methods of research which involved an investigation of early photographs as well as current Google Maps and Street View images to evaluate how the trees appeared at different times throughout their lives. I literally went up and down hundreds of miles of streets in Britain from my home in Belfast,to make comparisons and analyze trees then and now. 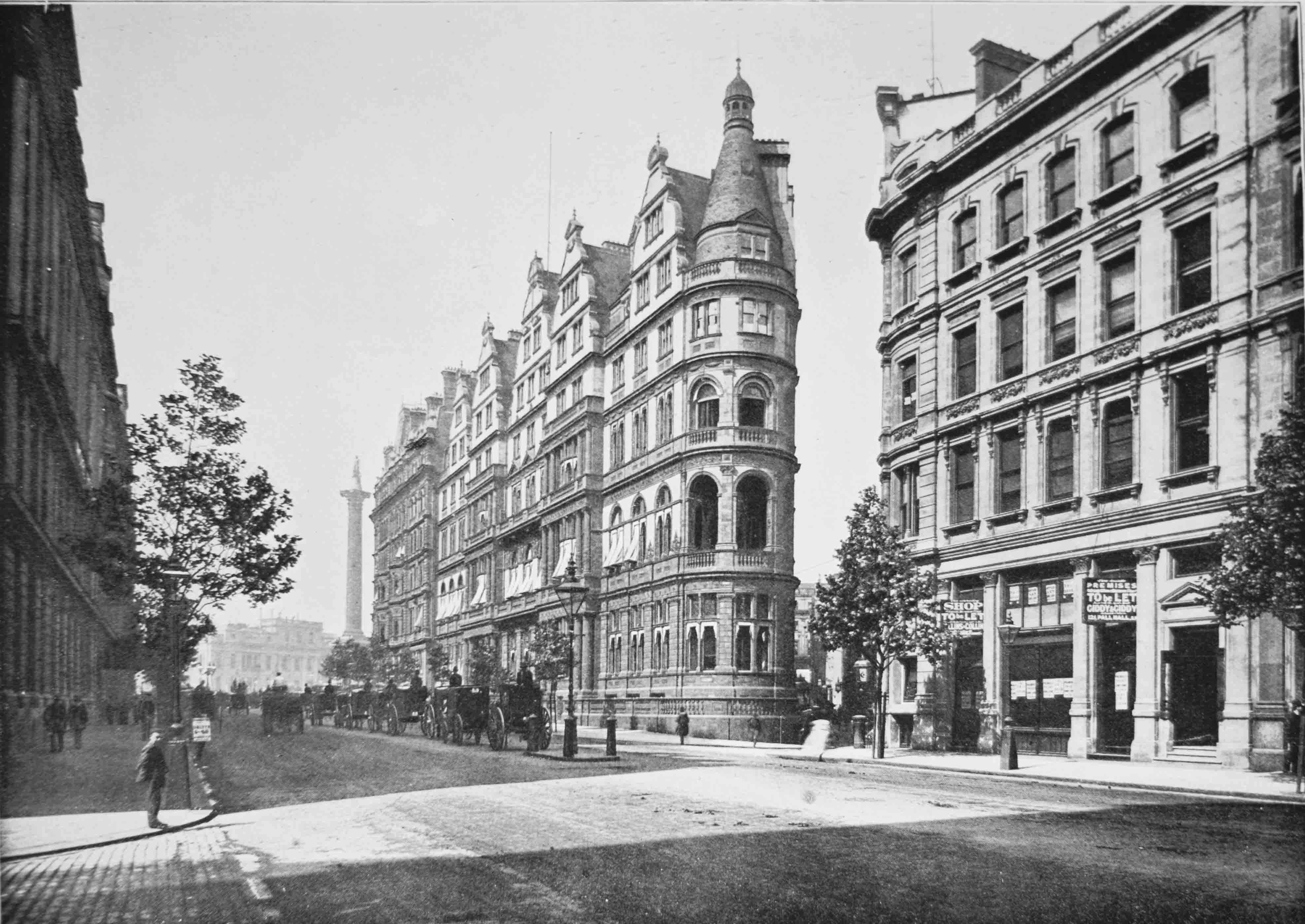 In the second chapter of the book, you discuss walks, allees, promenades, and cours. How do you see that these landscape features have contributed to the development of tree lined streets as we know them today?

All sorts of early influences helped pave the way for the acceptance of street trees in Britain in the mid-19th For example, the early green promenades in cities such as London, Cheltenham and York. From those promenades, we start to see the establishment of shops and cafes beside the route and the trees along those corridors effectively become street trees as the area transitions to a street. The British saw deliberate street tree plantings on a grand scale in places like Brussels and Paris and began thinking- why can’t we do that in London and Manchester and Liverpool? And so the inspiration behind the Victorian street tree movement in Britain was sparked.

One of the most successful early street tree plantings in Britain was along the embankment in London near the River Thames. These plantings began in the late 1860s and still exist today in the form of large plane trees. The public saw that these trees had been successfully established and looked great and slowly people began to change their way of thinking. 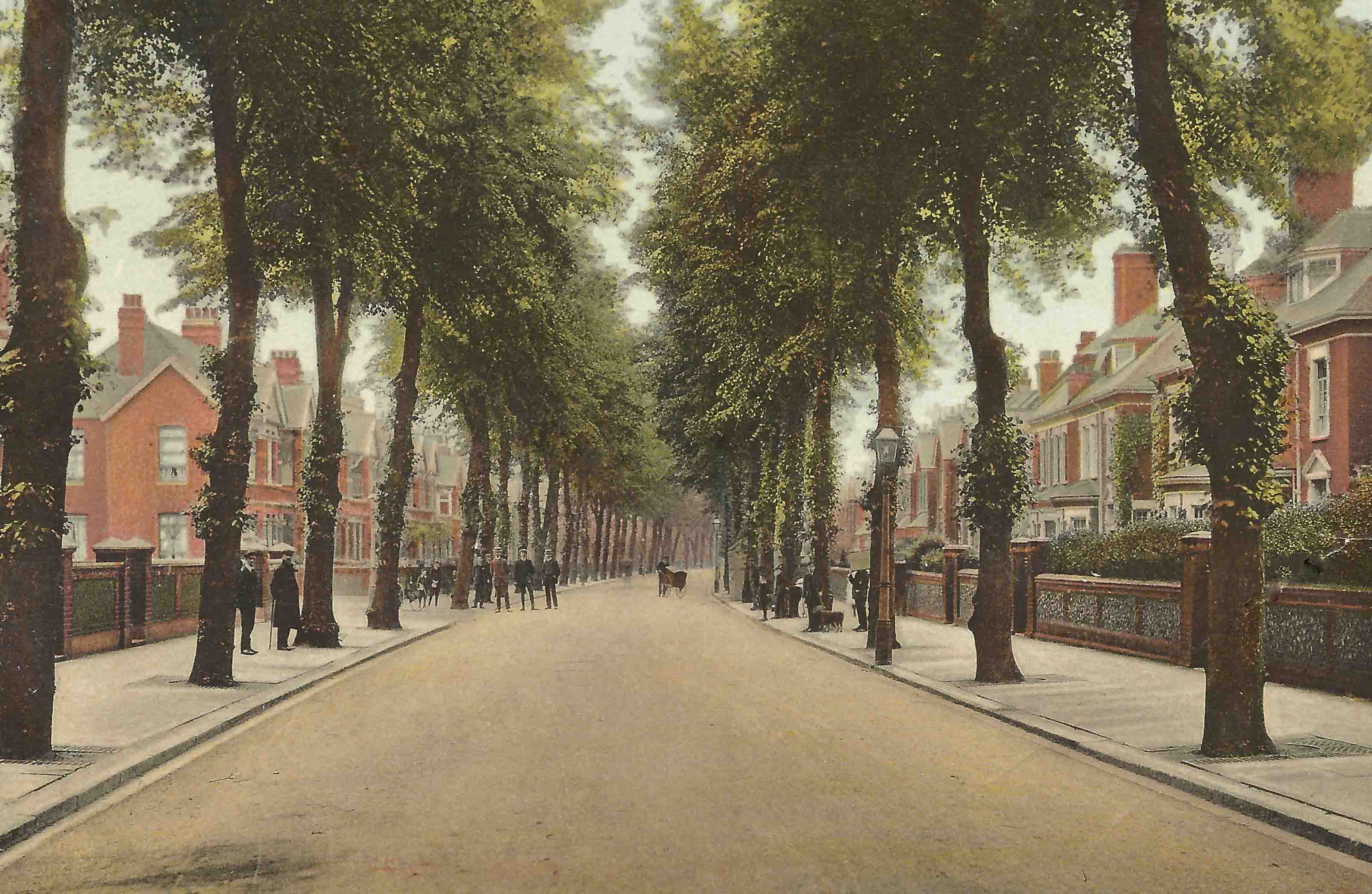 How did remnant street trees left over from past landscapes become incorporated into the modern urban landscape? Do any of those trees still exist today?

What we call remnant street trees are trees that have been left over from past landscapes and have been incorporated into cities and streets as urban development expanded. There are examples in the book of individual trees where that’s happened– venerable old oak and elm trees that have been retained and have survived in cities by the side of the road. Sometimes entire avenues of large trees that would have once led up to large stately homes are intact. When those mansions were sold for suburban development, their avenues were retained and those trees then became street trees in the new suburban development.

There’s one excellent example in the book of giant sequoias along an avenue that once led up to a very large mansion that have been retained in a suburban development and are still there and look absolutely wonderful. It’s called Pine Tree Avenue and is on the outskirts of Leicester. 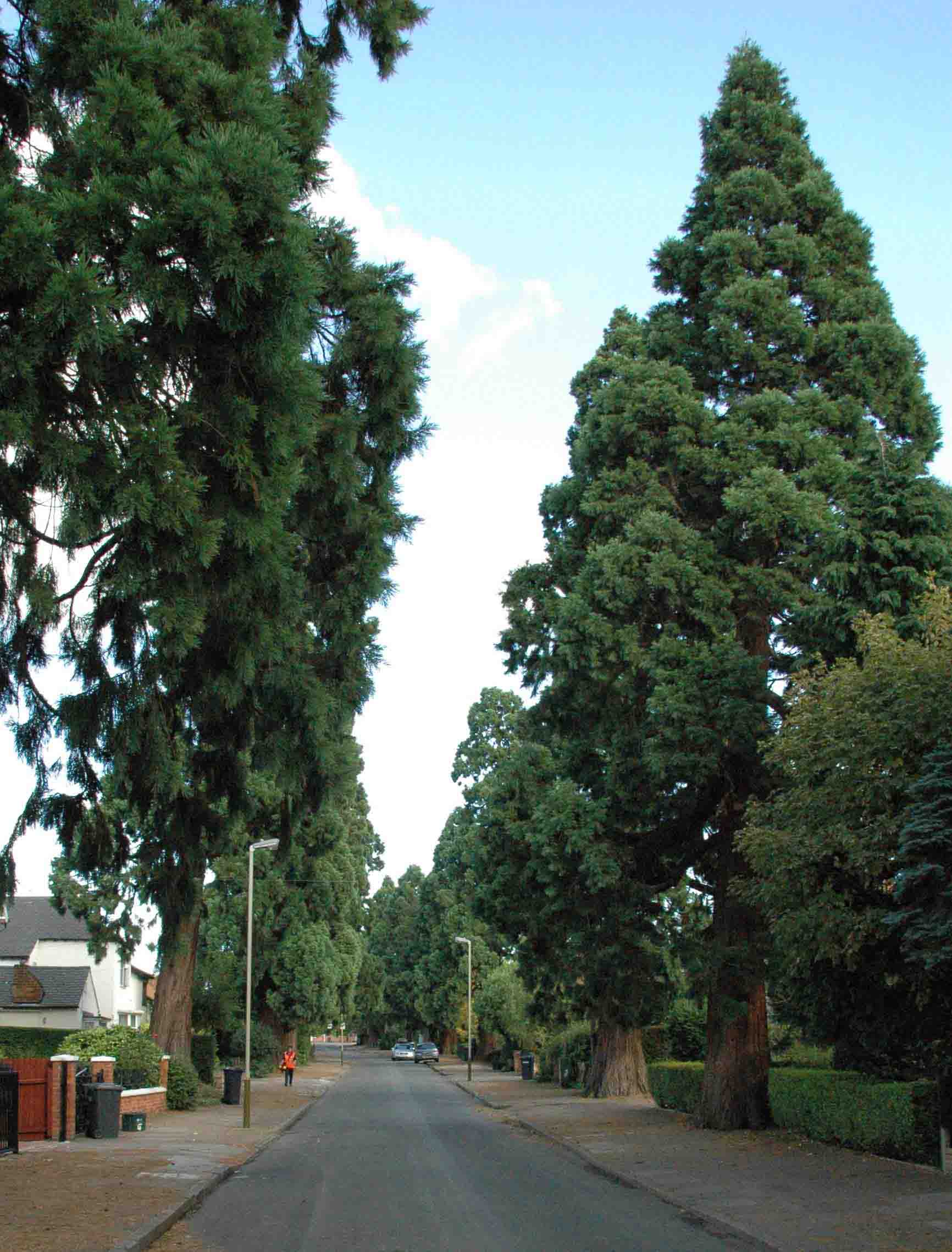 What developments in British society were fundamental in creating conditions that led  to the widespread introduction of public green space in the urban realm in Britain?

The general growth of cities was huge. There are also certain parallels between the Victorian Parks Movement – which was the development of public urban parks in Britain– and the widespread establishment of public street trees. The development of urban parks was driven in large part by a public health agenda but also by a desire to avoid civil unrest. Urban conditions in Victorian cities were grim, particularly for working class. There was very little public open space for recreation and air quality was bad. A movement began to create open space for people and later this turned into a movement to develop street trees as well. The aim was to try and create more pleasant green streets rather than grim, grey, depressing streets that were normal at that time.

How did the social status of particular locations effect street tree plantings and cover?

A large percentage of street trees were planted in wealthier areas of town and were privately funded by developers or by residents who moved in and were able to put up money to plant trees. Today in Britain, and similarly in the US and elsewhere, street tree cover generally reflects the economic and social status of residents. In more depressed areas of town there is far less tree coverage. In greener, wealthier areas, the distribution of streets trees reflects status and here these trees are often supplemented by plenty of trees in private front gardens. This is a recurring theme throughout the book, the distribution of street trees reflecting the social and economic status of a particular location. 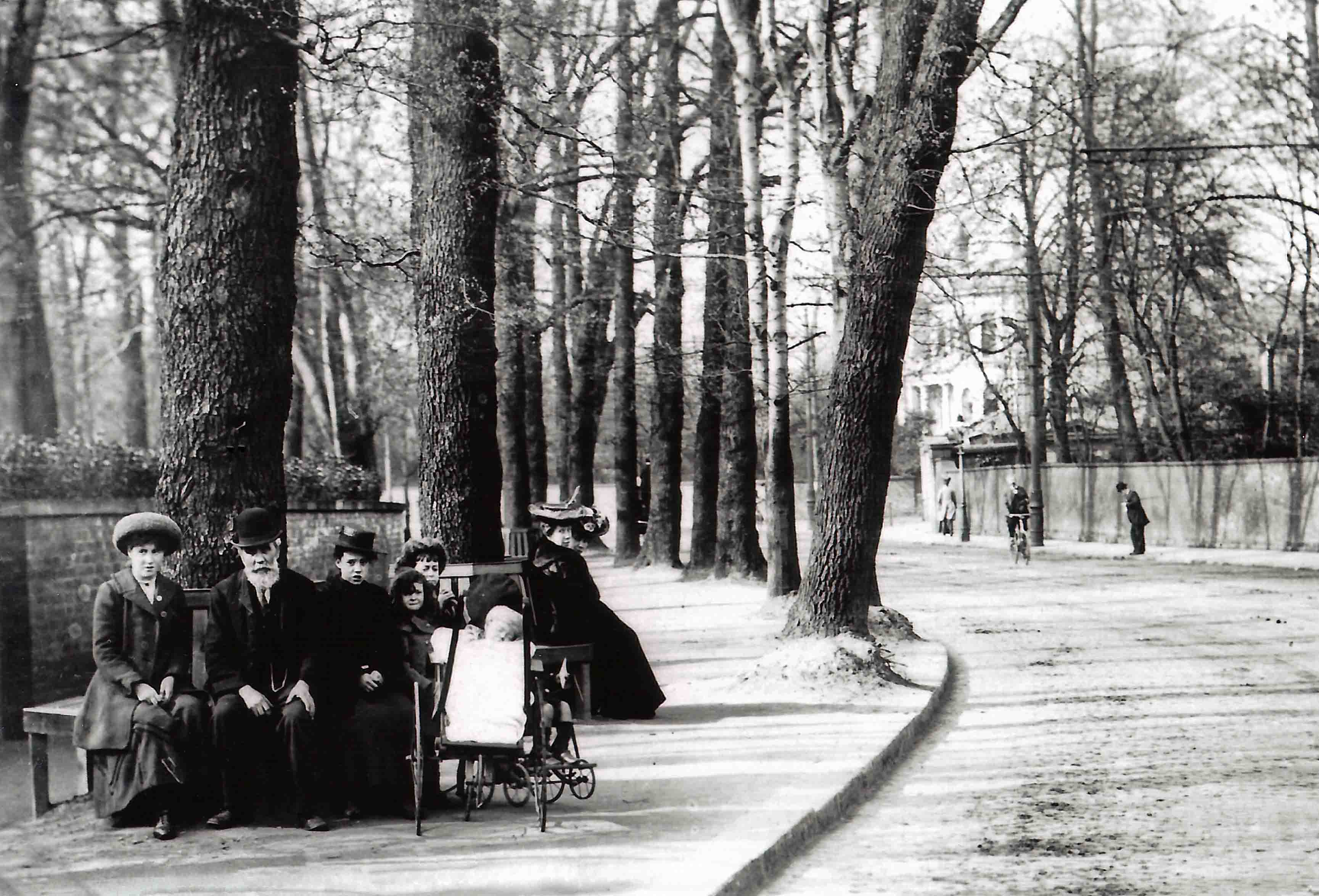 What do you see as the number one threat to urban street trees today?

I think the biggest current threat to street trees is car ownership. Previously it was pollution but since the invention of the motor car and motorized transport, the biggest threat has come from the private ownership of cars. Most existing housing developments, especially those created before the 1950s, were planned and built without any thought to cars and room for parking wasn’t factored in. Now, lots of front gardens and green spaces have been paved over, and basically any trees present have gone with them. Generally speaking, where trees are lost, they are very often not replaced.

Mark’s book can be purchased direct from the publisher or on Amazon.

All images courtesy of Mark Johnston