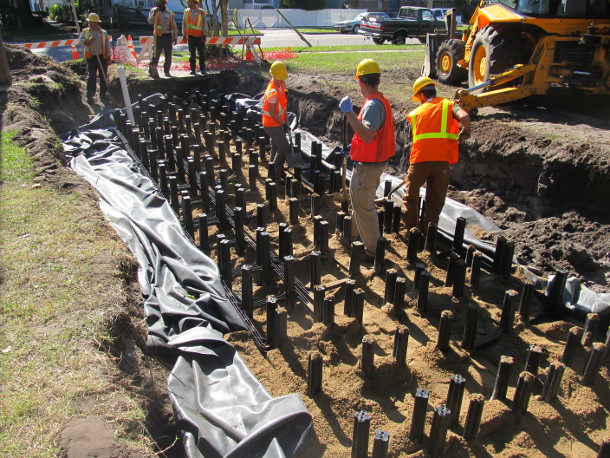 We are often asked for research results documenting the measurable benefits of using Silva  Cells to manage stormwater on site, so we are thrilled to announce that two Silva Cell systems were installed for this purpose during the summer of 2012 in Wilmington, NC. They are being monitored by an excellent research team at  Dr. William Hunt’s lab in Raleigh, NC, including Ryan Winston, Jonathan Page, and of course Bill Hunt himself.

If you haven’t been reading our blog for long, let me give a brief summary of how this works: the Silva Cells themselves do not manage stormwater, they just provide structural support so that the soil, the tree growing in the soil, and microbes on the tree roots and in the soil – which do all the work treating stormwater – are protected from compaction.  (Compaction, which eliminates the macro-pore spaces in soil, is one of the main reasons traditional trees and tree basins are not effective at stormwater management). 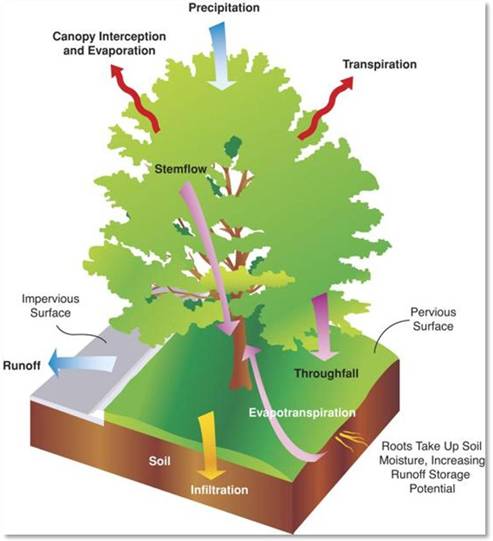 The Silva Cell system provides stormwater benefits in many ways. The three primary ones are: 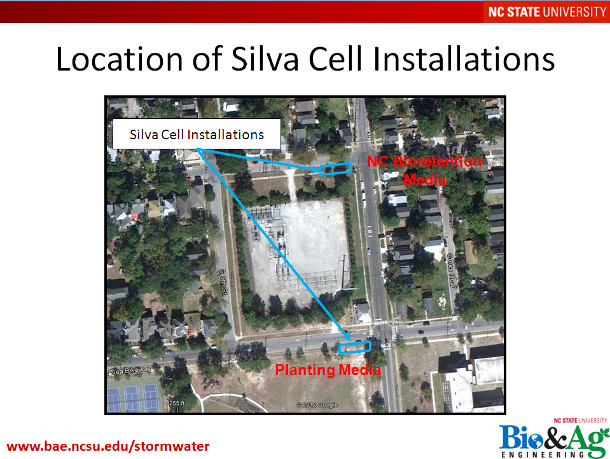 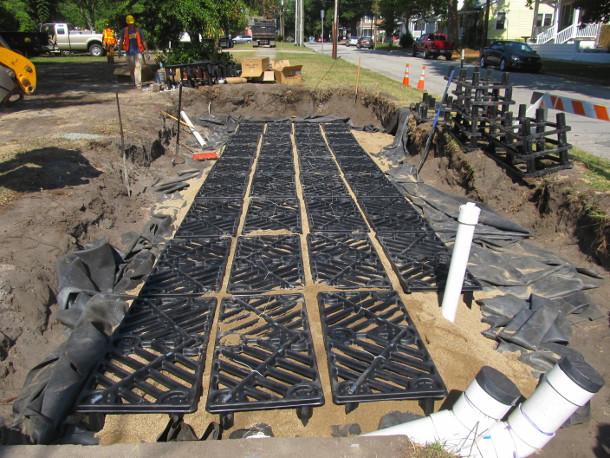 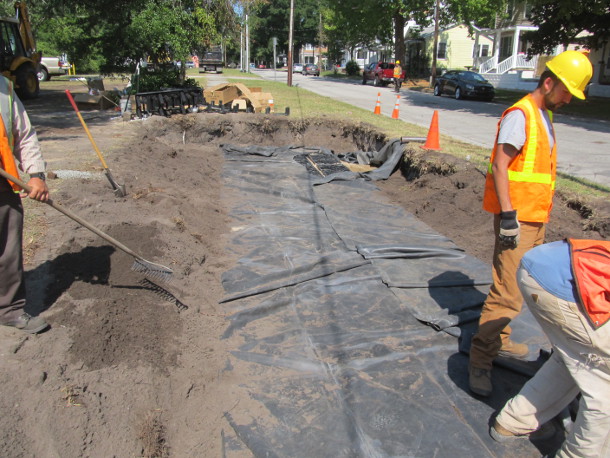 This Wilmington experiment is measuring  the stormwater benefits provided by the uncompacted soil only. Here is an overview of the study: 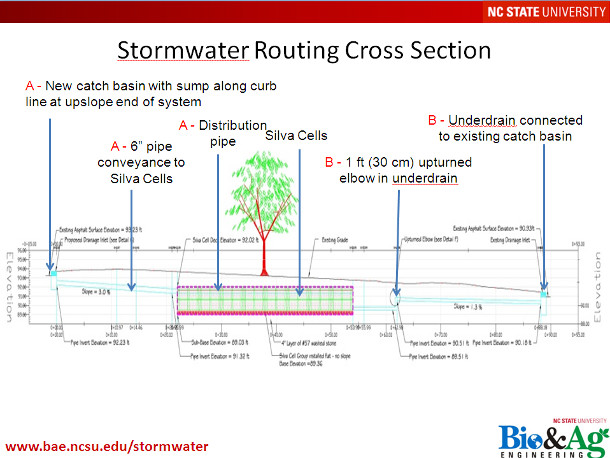 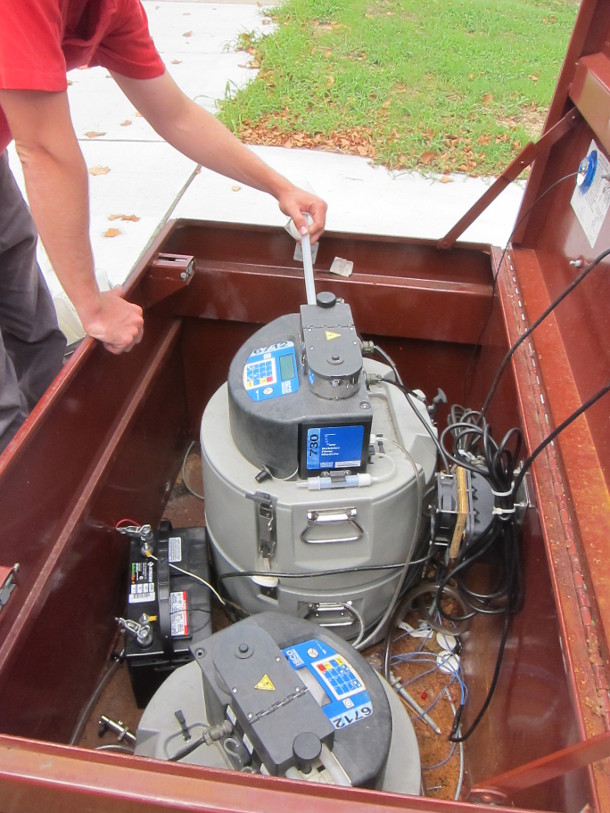 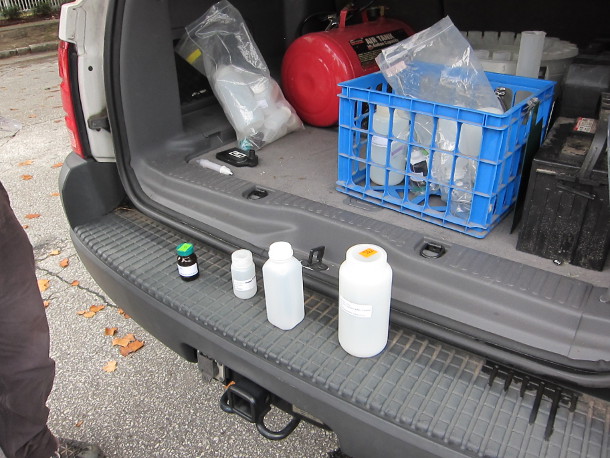 The monitored parameters for this study are:

Monitoring began in August 2012, and the equipment all seems to be working as planned! In the first few storms measured, the systems did retain some of the stormwater, and water coming out of the outlet was fairly clean. Runoff flowing into the system was not that dirty in the first place, so we did not observe a large percent removal of pollutants. The system did not add nutrients to the outflow. 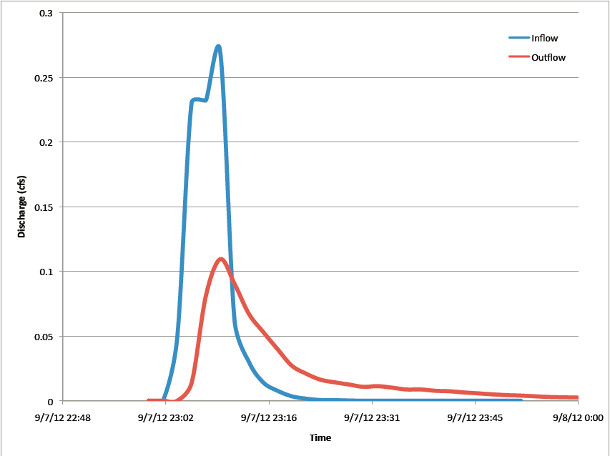 This hydrograph demonstrates the drop-off between inflow and outflow of water through the Silva Cell system over time.

The figure below shows the peak discharge rate reduction in the outflow pipe during the first storm. Dr. Hunt and his team will need to monitor 15 – 20 total storm events before results are statistically significant and they can make final conclusions about the performance of the system.

When I asked Ryan Winston what they expect to find at the conclusion of the study, he responded: “to prove to folks in North Carolina that this system can be used to treat stormwater in an ultra urban environment and spark more people to use these not only for tree benefits but also for stormwater benefits, and to see how they compare to other bioretention practices.”

Stay tuned for periodic updates throughout this coming year!