Just 8 blocks from Central Park, 20 trees with healthy soils and room to grow, will join the concrete jungle of New York City at 1271 Avenue of the Americas. A superlative example of mid-century modern architecture, 1271 Avenue of the Americas is an iconic Midtown Manhattan building with a rich history. Designed by Harrison, Abramovitz, & Harris and opening in 1959, 1271 Avenue of the Americas was the first expansion of Rockefeller Center across Sixth Avenue. Henry Luce was the main tenant and named it the Time & Life Building, after the magazines he founded. It remained as Headquarters for Time Inc. over 50 years, and later became famous as the fictional headquarters for Sterling, Cooper, Draper, Pryce Advertising in Mad Men.

The building’s top-to-bottom renovation transformation is being led by Pei Cobb Freed & Partners, with landscape design by Ken Smith Workshop, to make certain the plaza and streetscape surrounding the building will be exemplary in the neighborhood. This comprehensive exterior project revives the plaza and streetscape and is consistent with Ken Smith Workshop’s award-winning practice of landscape design in the realm of public space. This has led to pushing beyond traditional landscape typologies of plaza, street, and garden to conceptualize landscapes that are hybridized from diverse traditions and influences of the contemporary culture. Such an innovative design philosophy could not be possible without vibrant plants, trees and healthy high-quality soils. 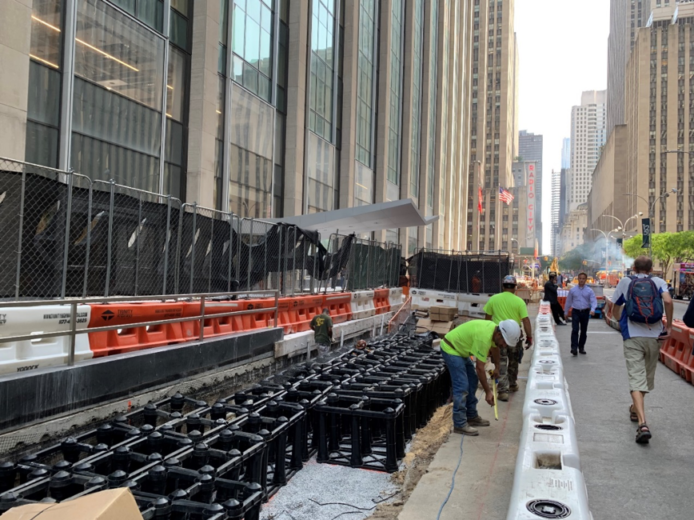 Silva Cell® systems on the North Side of 50th street, with Radio City Music Hall in the background.

An early adopter of DeepRoot’s Silva Cell® technology, Ken Smith, FASLA has utilized Silva Cell many times to great success, from the Brooklyn Academy of Music, to Cowles Commons in Des Moines. Ken’s innovations lead to a commitment to healthy soil. Working on iconic projects including the Channel Gardens in Rockefeller Center, and 7 World Trade in NYC, the Ken Smith Workshop is interested in longevity. Ken is right when he says, “A good soil foundation is the key to success for long lasting landscape design.” Usually preferring the re-use of local soil, Ken and his team noticed that the redevelopment of this massive structure over 70 years has left the site as largely aggregate fill devoid of organic matter. In this case, Ken’s vision of getting the soils right relied on imported soils. While any uncompacted sandy clay loam with 3-5% organic matter, 10% mature compost and a pH suited to the plants would work well, we find that soil with a clay content of up to 25% and the structure intact through minimal screening will promote greater plant health through increased cation exchange. It’s best not to mess with soil as much as possible, imitating natural deposits of rural soil in these harsh urban environments.

When finished, 1271 Avenue of Americas renovation will have 408 Silva Cells on the north and south sides of the building. The Silva Cells are providing 2,700 ft³ soil in phase 1, augmenting planter boxes to reach 700ft³ of soil per tree in shared rooting volumes. Phase 2 construction will mirror this in the coming winter months. There is a total 7,580 ft3 of lightly compacted loamy soil in the Silva Cells to augment the open planters in which the twenty street trees will be able to freely root We’re excited to be part of a plaza which has housed iconic people, ideas, and companies for decades. 1271 Avenue of the Americas will have beautiful and healthy trees as part of its story for the next century. A streetscape with a rich, iconic past, will be lined with a greener future and help NYC’s green canopy for future decades to come. 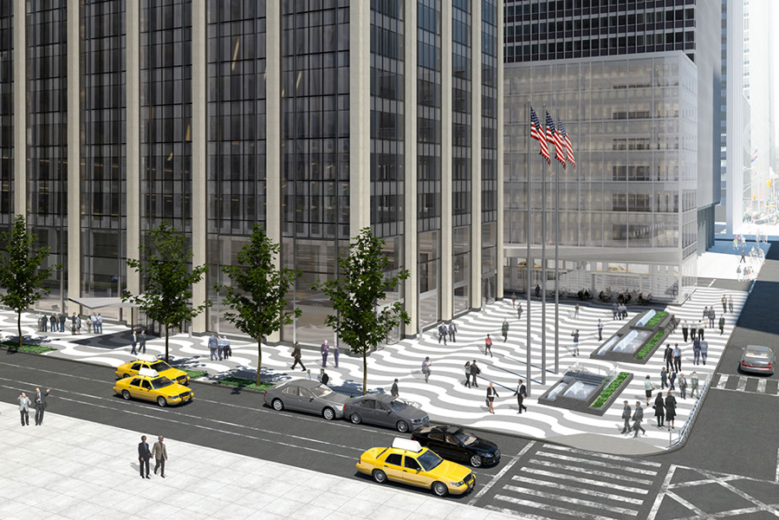