On “Protecting New York As An Ecosystem”Testimony from Dr. Franco Montalto, PE 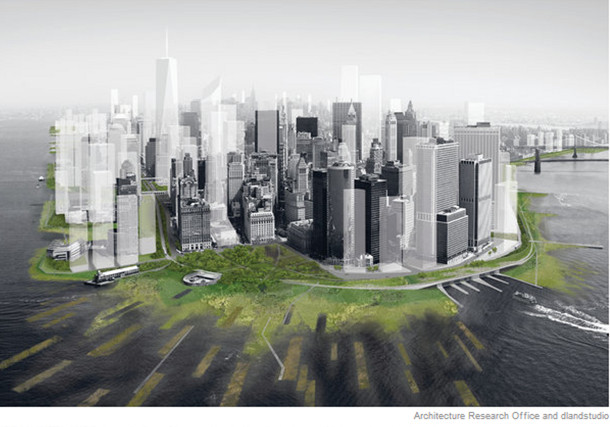 Today’s blog entry is reprinted testimony from Dr. Franco Montalto, PE, given to the New York State Assembly Standing Committee on Environmental Conservation at a public hearing on the environmental causes and effects of extreme weather events. The testimony was given on January 13th, 2013 and originally appeared on SwimmableNYC’s blog. Dr. Montalto is an Assistant Professor in the Department of Civil, Architectural, and Environmental Engineering at Drexel University and  founder and President of eDesign Dynamics LLC, an environmental consulting firm.

Dr. Montalto’s testimony is thoughtful and clear, and he makes a persuasive argument for the critical role that green infrastructure will play in mitigating the challenging climactic patterns and conditions that we know will continue to occur. I strongly encourage you to read the full testimony, but am also putting the parts I think are most critical in bold. – LM

Superstorm Sandy revealed the vulnerability of our region to a climatic event characterized by a coastal surge and sustained high winds, and not surprisingly much of the post-storm debate has been focused on whether or not to spend tens of billions of dollars on a storm surge barrier.

But it’s important to remember that, under another set of atmospheric circumstances, this same region can be pummeled by intense bursts of rainfall, exposed to prolonged periods of drought, and subjected to elevated temperatures. Since it is impossible to predict which of these challenging climatic conditions we will face next, a more constructive public discussion would be focused on how to build up our regional capacity to weather all kinds of weather. This goal is best addressed with an ecosystem approach.

By ecosystem approach, I am referring to an integrated regional strategy that, in a distributed fashion, enhances the capacity of our ecosystem to provide us with a range of useful services. The kinds of services I am referring to include protection from destructive wave energy delivered by the likes of Sandy, but also a range of other services (e.g. shade from the sun, evaporative cooling, runoff reduction) provided continuously throughout the year. These kinds of services are useful at reducing our vulnerability to episodic climate risks, but are also valuable to us in between infrequent extreme events.

Though we can engineer structures and machines (e.g storm surge barriers, air conditioners, treatment plants, etc.) for some of these same purposes, such contraptions are typically quite costly, usually only designed to solve one problem at a time and once built, cannot be easily modified. Since decisions regarding how they are designed are typically finalized years before construction is completed, there is always uncertainty as to how well they actually will work when they do come online, and what their long term performance will be as the world around them changes.

Alternatively, the ecosystem approach seeks to obtain the same set of services using “green infrastructure,” a term I use here to refer both to what remains of our region’s historical natural areas, as well as to new, strategically designed and placed green spaces positioned around the region. Because green infrastructure systems are alive, they are intrinsically dynamic, adaptive multitaskers (like us). The science overwhelmingly suggests that if integrated appropriately into the built environment, different kinds of green infrastructure can alternatively dampen waves, attenuate wind, intercept rainfall, block the sun, and wick heat away from the city. Wherever they replace impervious surfaces, vegetated spaces connect the landscape’s surface with its subsurface, enhancing their capacity to absorb rainwater, as well as resist heating up when exposed to sunlight. What’s more, they provide these services all the time (not just episodically “when the gates are raised”).

To be clear, in their current state, few of the remnant natural areas along our coasts (e.g. wetlands, oyster reefs, mudflats, etc) provided much protection from Sandy. To understand why, we need to consider the spatial history of our region’s development, which significantly altered the configuration of the entire ecosystem. Tidal wetlands, for example, were diminished to only 20% of their historical extent by the end of the 20th century. In their place, we built residential neighborhoods, airports, sports arenas, highways, and train tracks, many of which experienced the worst of Sandy’s wrath. Indeed, one can almost delineate the worst impacts of Sandy by identifying the historical wetland areas on a tattered 200 year old historical map of the harbor region.

But there is growing evidence that if we increased the scale and density of our green infrastructure (funded initially with the tens of billions of dollars of disaster aid requested by President Obama), we could significantly improve the ability of our urban landscape to defend us against a wide range of climatic extremes. For one, the 70,000 acres that remain of our region’s original tidal wetlands, and the 4,000 acres of wetlands that have been restored or enhanced in the last quarter century, both seem to have weathered this storm handily. Where there was a coastal wetland, there may have been a buildup of wrack and debris during the storm, but there wasn’t a wrecked house or a lost life.

Secondly, although narrow, low-lying beaches had little capacity to buffer the destructive energy of waves, reports from the New Jersey Coast, Fire Island, and the Rockaways are telling us that where beaches had been nourished (widened and built higher with dunes) coastal damages were minimized.

Third, as for the thousands of engineered tree pits, vegetated depressions and roofs, and constructed wetlands being built throughout the city as various components of PlaNYC, our research suggests that though large storms may saturate them, in portions of the city where flooding occurs regularly during the most frequently occurring (smaller) rain events, green infrastructure can significantly reduce flood risks. Over the course of the average year, our work with the NYC Parks Department also suggests that these systems can attenuate between 40 and 100% of the rainfall and runoff directed to them (with the variability depending on local site conditions).

By enhancing the ability of the urban landscape to provide multiple services, green infrastructure systems can also help conventional infrastructure systems to perform at higher levels. Distributed in a patchwork throughout the city, vegetated depressions designed to intercept runoff from streets and sidewalks allow the existing conveyance capacity of sewers to be used more efficiently. Each pound of water that evaporates from leaf surfaces, moist soils, or a pond also consumes 970 BTU of heat that would otherwise likely be offset with mechanical air conditioning systems, at significant cost. Finally, by positioning riparian wetlands, oyster reefs, and other natural areas in the way of flowing water, we reduce its velocity and therefore also its ability to cause erosion and scour around bridge piers, bulkheads, building foundations, and coastal roadways and rails.

All of these benefits accrue while simultaneously enhancing the viability of regional wildlife habitat, creating important cultural symbols (imagine Brooklyn without Prospect Park), recreational destinations, and millions of tourism dollars. Moreover, because a large scale investment in green infrastructure would involve new green features added to many different communities, many people would see it in action and thus gradually gain a more comprehensive understanding of how their environment works, and can be made to work for them.

Rebuilding (as a physical undertaking, but also as a financial investment and a rare political possibility) is an unprecedented opportunity to reconfigure vulnerable neighborhood and infrastructure systems. We can’t stop the weather – but with political will, we can implement a wide range of strategies that will make our ecosystem work better. While only a comprehensive study can determine whether a storm surge barrier is an appropriate investment for our region, there is no doubt that by enhancing, preserving, and engineering new green infrastructure we will be incrementally reducing regional vulnerability to dynamic pulses and impulses of our local environment.

Dr. Franco Montalto, PE is an Assistant Professor in the Department of Civil, Architectural, and Environmental Engineering at Drexel University and is founder and President of eDesign Dynamics LLC, a NY C-based environmental consulting firm.