Phoenix, AZ’s Once and Future Forest

Richard Adkins, the Forestry Supervisor for the city of Phoenix, Arizona, likes to joke that despite the perception, Phoenix actually does have an Urban Forest. I met Richard when we were both speakers this past August at the American Public Works Association (APWA). He spoke to me about Phoenix’s current urban forest and some of the challenges and successes they’re facing after conducting their tree inventory in 2012. This conversation inspired me to ask additional questions and seek out more information about these plans, because I think Phoenix is a fascinating case study of a place that already has tremendous climactic challenges, something that dozens of cities will soon be facing. Here are the questions I explored, and the answers I found. This interview has been edited and condensed.

How much canopy does Phoenix, Arizona have currently? Is it “enough”?

Phoenix is 519 square miles and has approximately 9% Urban Tree Canopy Cover (UTCC). This works out to about 3.17 million trees providing 46.7 square miles of tree canopy, which is a huge area.

If you do the math that means Phoenix’s urban tree canopy cover is only 6 square miles smaller than the entire area of Minneapolis proper. That is somewhat remarkable for a place that only averages 8.5 inches (21.5 cm) of rain per year!

We can do better, because 1920’s Phoenix was famous for its tree lined canals, and had about 50% tree canopy, but it’s not bad for such a large city area. Phoenix builds out, not up.

Still, anyone that’s visited Phoenix on 100-degree Fahrenheit days, including myself, can tell you that 9% tree cover will not provide nearly enough shade.

It’s true. In 2009, the Phoenix City Council announced they would achieve 25% urban tree canopy cover by 2030. Gaining an additional 16% tree cover from where we are today sounds reasonable, but if only it were that easy.

In 2011, a University of Arizona landscape architecture student named David Fowler asked if it were even feasible to achieve that goal. His conclusion is that it was within the realm of possibility, but the culture of tree planting in Phoenix would need to be radically re-imagined, including a requirement for providing street trees with 500 cubic feet (14 cubic meters) of soil at planting. David won an international Honor student award for this work, so this was not some back of an envelope supposition.

How large are the trees in Phoenix currently?

A lot of people would be similarly surprised to learn that Phoenix’ top 3 most common trees are Velvet Mesquite, California Palm, and Sweet Acacia. As the canopy of the California Palms is very small, that means that the Mesquite and Acacia canopies are much larger than 411 square feet! 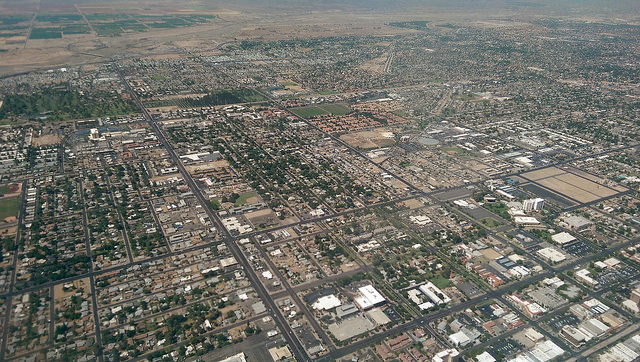 What is Project Desert Canopy?

Project Desert Canopy was a collaboration with the US Forest Service and several arid southwest cities, the premise being that desert cities are unexpected, but important, places to grow large urban forests.

My high level executive interpretation of Project Desert Canopy was that all of these cities could increase their urban canopy cover if they put a minimum soil volume in place and directed all stormwater from their impervious surfaces to their trees. Examples that come to mind would involve curb cuts for street trees and open space trees in mulch basins, or on slopes with stormwater speed bumps and perimeter berms with trees to hold all the rain water on-site and eliminate run-off.

That would be a great approach to naturally irrigate they city’s trees, but in old Phoenix, there are historical groups that won’t allow curb cuts in 1913 era curbs!

What do we know about Phoenix’s urban canopy relative to stormwater?

We know from our inventory and i-Tree modelling that Phoenix’s tree canopy intercepts and evapo-transpires 91,700,000 cubic feet (2,596,655 cubic meters) of stormwater per year.

That’s a big number. What does that look like?

Let’s take a look at the biggest building in Phoenix, the University of Phoenix Stadium where the NFL Phoenix Cardinals play. The football playing field is 1 acre in size. Imagine 1 foot of water covering the entire field – that equals 1 acre foot of water, which is the most common way to measure large volumes of water. We would need a tower of water 2,105 feet tall, covering that football field, to equal all the acre feet of stormwater that Phoenix 9% tree canopy manages per year. 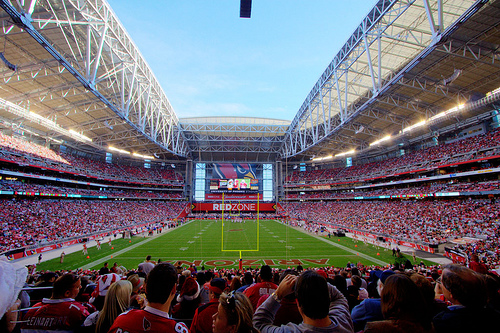 Despite how big that number is, we’re going to need an even bigger one – aren’t we?

Yes. Although that’s a lot of water, Phoenix is a very big city with huge amounts of hard surfaces and a shortage of irrigation water. The other 91% (472.3 square miles) of Phoenix without tree canopy allows tens of thousands of acre feet of fresh rain water to run off into concrete ditches, pipes, and out to the ocean. That’s a real shame because instead of a waste product this water should be treated as a priceless asset.

What is the city doing to achieve this?

The Phoenix City Council wants to capture and clean this run-off, and also to cool the city, because we have an average of 92 days per year where temperatures are above 100 Fahrenheit. A resolution was passed in 2007 requiring a minimum of 300 cubic feet (8.5 cubic meters) of soil for every new tree planted in Phoenix!

When Kestrel and DeepRoot did our meta-study of North American cities that had minimum soil volumes, I was so pleased that Phoenix, a place where it’s hard to grow trees had taken the critical soil volume step. I know cities are serious about increasing their urban tree canopy when they put a minimum soil volume requirement in place.

Unfortunately, two years later the city changed the 300 cubic feet of soil per tree from a requirement to a guideline!

That’s terrible; Phoenix is the first city I know of that passed and then withdrew their soil volume requirement.

But city council passed another resolution to increase Phoenix’s tree canopy to 25% or 130 square miles of its land area by 2030.

Is 25% Urban Tree Canopy by 2030 even realistic for Phoenix, especially when they got rid of the minimum soil volume requirement?

25% urban tree canopy cover is the recommended American Forests guideline for cities west of the Mississippi, but I think that number is too high for Phoenix because of its aridity. I also think that the timeline is too aggressive.

What would be more reasonable?

Is there enough run-off water for all the new trees the city anticipates planting?

What’s realistic for Phoenix, with its almost year round growing season, 300 sunny days and extreme temperatures?

The city does average 28 days of measurable rainfall per year. If only half of those days of rain produced enough run-off to fill those tree pits, each tree would average 235 gallons per rainfall 14 times. Divide that by 3,300 gallons per year and it is more than adequate to grow great trees.

Going with the current average canopy size of 411 square feet per tree, it will take 411 cubic feet of soil to support a canopy of that size… but, because lots of trees would share soil volumes, Phoenix’s average minimum soil volume requirements could return to 300 cubic feet soil per tree!

In short, with 300 cubic feet of soil volume per tree, changing Phoenix’s ground surfaces to always drain to a tree pit, I think it is possible to reach 20% urban tree canopy with 7.04 million trees supported by rainwater for the long term.

How many trees is Phoenix actually planting on an annual basis?

Doing the math, if Phoenix wants to rely solely on city crews to plant all those 3.87 million new trees, the project would take 1,291 years. In that case, how can they ever reach the goal?

To have any chance of reaching 20% urban tree canopy cover in 25 years, everyone needs to help plant hundreds of thousands of trees on private property as well as in the public right of way.

Thank you to Richard Adkins for inspiring this blog and contributing to the research regarding Phoenix and its urban forest. Thanks also to Leslie Sauer, author of The Once and Future Forest, inspiration for the title of this blog.

L. Peter MacDonagh is the director for science and design for the Kestrel Design Group.