I spent a good part of last winter completing a  literature review on bioretention media for a revision to the Minnesota Stormwater Manual. So when I attended the Low Impact Development (LID) conference in St. Paul, MN earlier this month, I was very interested to learn of a recent specification coming out of New Zealand: a 129-page technical report, Media Specification for Stormwater Bioretention Devices (Fassman et al 2013). I looked at it the very next day: what a goldmine! Where was this when I was doing my literature review?!

Co-written by an engineer and an ecologist / soil scientist, and backed by an extensive literature search, lab tests, personal communication with many other disciplines, and soil suppliers, it is the most comprehensive and well rounded publication I have seen on bioretention media to date. 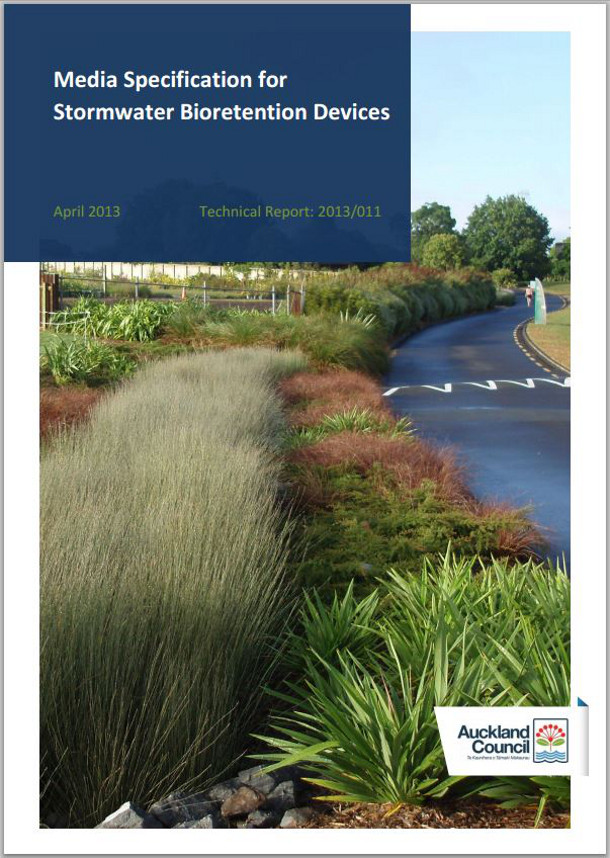 Today I’ll be providing a brief overview of the scope of the report and highlighting a few of the things I liked the most about it. I will not give an overview of the results of the studies conducted in this report;those are well summarized in the report’s conclusions section.

The investigation described in this report consists of three parts, a literature review and two stages of investigation.

According to the authors of the report, “The aim of the first stage of research was to assess how candidate bioretention filter materials react to different mixing and compaction treatments and how their performance compares to criteria established from a literature review” (Fassman et al., 2013).

The authors searched for a media with the following design criteria:

In addition to meeting the above design criteria, the media also needed to meet the following assessment criteria:

The second stage was a performance test of the best media chosen during the first stage.  Specifically, “the aim of the second stage was to carry forward the best candidate media from the first stage and conduct water quality tests. Water quality tests aim to provide estimation into the pollutant removal ability of the media, as well as developing an understanding of how the pollutants are being removed. Several of the mixes tested for water quality performance were also subjected to plant growth trials in a shaded glasshouse” (Fassman et al 2013).

Stage 2 included investigation of the following on pollutant removal efficiency:

Throughout this report, it becomes evident how important it is to combine literature review with lab tests and multidisciplinary communication to study low impact development (LID). Here are a few examples.

Compaction testing to quantify the effects of compaction on soil-based vs. sand-based bioretention media

“Compaction testing shows water content is an important property to consider when installing filter media as different water contents will produce significantly different densities of media under the same compactive effort. Compacted densities for media with a high proportion of compost can change by up to 26% as the water content is altered with infiltration rates being reduced by a factor of four. East Coast Sand and Woodhill Black Sand without organic content display no change in resulting compaction when water content is varied, indicating that the organic proportion is of most importance when it comes to compaction of sand:compost mixes. Most bioretention filter media will contain organic matter, and therefore it is important to specify a comprehensive compaction strategy which takes into account water content… Testing also shows the hydraulic conductivity of sand-based mixes does not significantly differ between light tamping compaction or wetting and settling compaction.” (Fassman et al, 2013, p. 102)

These tests enabled the authors to write a specification that will provide desired compaction levels with a predictable impact on hydraulic conductivity.

Unlike most bioretention media reports, this report actually describes the mineralogical composition of the aggregates studied, as well as the chemical properties that affect pollutant reduction. Dialogues with suppliers proved helpful to determine quality control, availability, consistency of supply, and cost. The importance of talking to the suppliers was highlighted, for example, when the authors found out that one of the materials that best fit their criteria, scoria, was not likely to be available long term: “Unfortunately, although scoria was identified as a desirable aggregate, meeting with the supplier revealed that scoria production in the Auckland region in the future is uncertain, with no substantial new resources being available once Three Kings Quarry is exhausted (Winstone’s pers. comm. 2010)” (Fassman et al 2013, p. 66). Knowing this allowed the authors to drop this aggregate from further studies, and use their time and resources more productively studying other materials with a more certain long term supply.

I’ve read a lot of research papers but had never seen a reference to Parfitt (2011) before, so I looked it up in the references section, and found that it was personal communication with a biogeochemist. I was impressed that the authors did not just do a literature search and lab studies, but also talked to a biogeochemist. Perhaps this is a no-brainer to some people, but how many people actually do this?

As the authors acknowledge themselves, this study did not include field studies, and research is showing more and more that, due to factors like the interactions of soil, vegetation, microbes, and pollutants over time, field study results are often very different from lab studies. For this reason, field studies are needed to confirm the results of the studies and findings from this technical report. However, preliminary tests like the ones described in this report can be invaluable to guide field studies to be as informative and efficient as possible.

Nathalie Shanstrom is a landscape architect with The Kestrel Design Group.