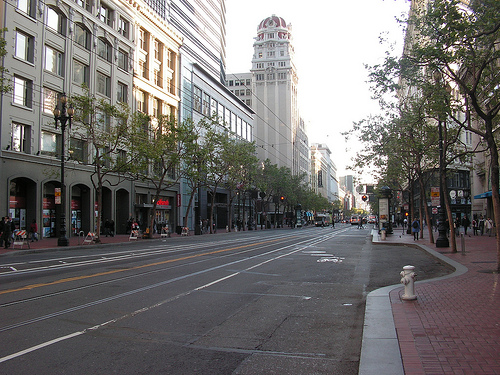 I read a lot of news stories about development projects described by words like sustainable, walkable, dense, and multi-use. These characteristics are experiencing a real surge in emphasis from both a design standpoint and from media coverage, and rightly so. They are some of the pillars of community design that support the physical and economic health of individuals, of towns, and countries.

Still, when I read stories about these developments, it often feels like something is missing. Are we getting maximum value out of them? As far as green utilities are concerned, the answer is often no.

Many of these projects — for example, Better Market Street, which is underway here in San Francisco — are tremendous public investments. They provide brawn to the local economy while they’re being created, but residents are left holding the bag on long-term maintenance costs. If the public can’t afford to support them, these tremendous public investments, whose champions tout them as important community assets, can become liabilities. (This is one of the main messages of the folks at Strong Towns, who espouse design principles and planning logic “to support a model for growth that allows America’s towns to become financially strong and resilient.”)

I’m not trying to pick on Better Market Street, whose design has not even been finalized, much less built. I’m just using it as an example to explore the idea of leveraging huge public investments for maximum revenue and longevity. There are many ways to achieve that from design standpoint. At DeepRoot, we focus on how to do it using green infrastructure, namely trees and stormwater.

If all this makes sense to you, and you agree that public investments should be leveraged for maximum value, there is no reason to continue planting trees in 4 x 4 cutouts and replacing them every 13 years. We already know we can do better than that.

One of the core elements of our work is trying to convince people of the true value of the urban forest. Sometimes this means putting trees in the context of otherwise dissimilar urban infrastructure, such as pipes or cisterns, to emphasize thinking of trees as utilities. Pipes and cisterns have their place, but trees are unique in their ability to actually appreciate considerably in value and function, performing on-site stormwater management and enhancing community assets such as home and property value, traffic safety, public health and wildlife habitat (among other things).

Planting trees in conditions that will support long-term growth is the first way in which we need to revise our assumptions about trees as utilities. For trees to live to 60, 70 or 80 years old they need adequate amounts of high-quality loam — usually around 1,000 cubic feet per tree. Our estimates indicate that trees planted in 1,000 cubic feet of soil (28 cubic meters) pay off their investment after around 20 years. And those trees could be around — and contributing substantial economic value — for many, many decades beyond that. 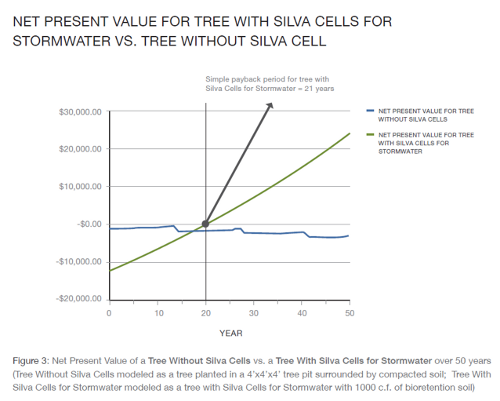 Properly-planted trees also play an important role in stormwater infrastructure.  This is arguably where they have the greatest value. The soil trees grow in alone is capable of managing daily rainfall events of up to 2″, which is greater than the “P” (90%) storm event for many, many places.

As Nathalie’s original blog entry explains, as the tree grows bigger and its canopy fuller, its capacity to manage stormwater will increase further as a result of interception (the amount of rainfall temporarily held on tree leaves and stem surfaces). Interception is not typically included in stormwater calculations but can provide significant additional stormwater benefits beyond storage in the soil. 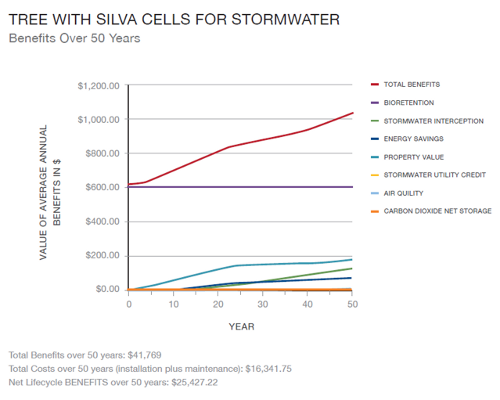 The point I’m trying to make here is not that trees and soil obviate the need for pipes and drains. Instead, it’s that we should bring the same commitment and rigor to planning for green infrastructure elements like trees and soil as we do to buildings, streets, lights and pipes.

We make massive investments in “gray” infrastructure with the expectation that it will perform as efficiently and effectively as possible, even though we know it loses value as soon as it goes online. Trees work in the opposite way and require us to plan a little differently, yet the potential payback is enormous. Designing conditions for trees to grow and thrive, especially on major public projects, will maximize their revenue and longevity, and should be an imperative in all of our communities.