If you are a regular reader of this blog, then you know we’ve had a recent spate of articles about biochard – from its history, to a discussion of possible applications and controversies, to a question-and-answer following  a recent webinar about what designers need to know about the product. Because of the tremendous potential for trees and biochar to provide stormwater benefits, we also wanted to delve into the state of the science of using biochar to improve stormwater benefits of tree/soil SCMs (Stormwater Control Measures).

Stormwater benefits in a nutshell

You may already know that, supplemented with compost or fertilizer, biochar can greatly improve tree health and aesthetics. With its high surface area and porosity, biochar has the potential to not only enhance tree health by increasing nutrient and moisture retention, but to also provide tremendous stormwater benefits. Stormwater benefits of biochar documented to date are summarized  below.

While biofilters are generally ineffective in removing bacteria from stormwater, biofilters amended with biochar show great promise for E. Coli removal  (e.g. Mohanty and Boehm 2015, Mohanty and Boehm 2014, Mohanty et al 2014). Mohanty et al (2014) found that “Compared to sand, biochar not only retained up to 3 orders of magnitude more E. coli, but also prevented their mobilization during successive intermittent flows.”

Lab and field tests show that certain biochar amended soils can remove high levels of heavy metals from water, with 80-97% of copper and zinc removal (Gray et al 2015). However, metal removal by biochar is highly variable, depending on a number of factors, including the ionic radius of the metal, temperature at which biochar is produced, and pH.

In some cases, heavy metals actually increased in water with biochar. Gray et al (2015), for example, found that unrinsed biochar can emit a pulse of contaminants if not rinsed prior to installation. Ahmad et al (2014) includes a detailed review on studies of factors affecting biochar effects of heavy metals in soil and water.

As Kelby Fite mentioned in “Your Biochar Questions, Answered” fresh biochar is also used to clean the effluent coming from dairies, resulting in a relatively nutrient-free effluent leaving the facility. The biochar that has sorbed nutrients from the dairies “can then be used for use in an agricultural or horticultural setting – it’s now more valuable than it was before.” 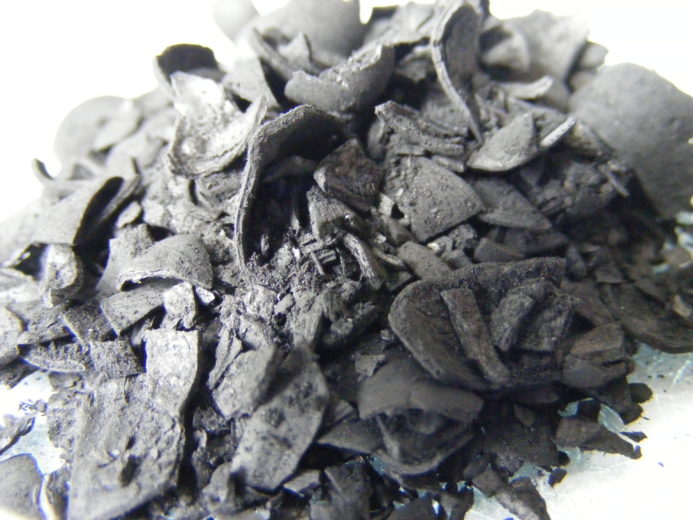 A literature review by Ahmad et al (2014) summarizes “Overall, the biochars produced at higher temperatures exhibit higher sorption efficiency for organic contaminant remediation in soil and water. This is probably due to the high surface area and microporosity of biochars. Additional sorption mechanisms include electrostatic attractions between charged surfaces of biochars and ionic organic compounds.”

Ways to incorporate biochar into SCMS

Although using biochar for stormwater benefits is in its infancy, biochar has already been incorporated into SCMs in many different ways, including:

Bartlett Tree Research Laboratory is also investigating injecting biochar into urban tree soils. If you have incorporated biochar into SCMs in any other ways, please let us know!

Factors that affect biochar pollutant removal include surface area, pore size distribution, ion-exchange capacity, and pH. These are influenced by the type of biomass and the process used to make biochar, including pyrolysis temperature, residence time, and heat transfer rate (insert images from slide 38 from webinar). According to Ahmad et al (2014):

“Relatively high pyrolysis temperatures generally produce biochars that are effective in the sorption of organic contaminants by increasing surface area, microporosity, and hydrophobicity; whereas the biochars obtained at low temperatures are more suitable for removing inorganic/polar organic contaminants by oxygen-containing functional groups, electrostatic attraction, and precipitation.”

While the use of biochar in SCMs is in its infancy, and many questions remain to be answered, the potential of biochar to enhance SCM performance looks very promising. The use of biochar to enhance stormwater benefits is all the more appealing because it also provides so many other benefits, including enhanced plant health, growth, and disease resistance; improved soil structure; Carbon sequestration, and turning waste biomass into an asset.

Nathalie Shanstrom is a sustainable landscape designer with The Kestrel Design Group.