A common concern when integrating street runoff into a Silva Cell system is the effect that deicing salt may have on trees.  In areas with cold winter climates, we commonly see salt damage to street trees.  Deicing salt from roads is picked up by stormwater runoff and enters tree pits. Often, roots are damaged when trees are planted in small pits surrounded by compacted soil as this causes salty runnoff to pool in the pit or percolate very slowly.  When spring arrives, tree roots grow into the salt water/soil mix. In high concentrations, the salt can kill the tree roots. Even in low concentrations, salt restricts the uptake of water and nutrients. This results in the cholorotic trees becoming desiccated with small, dry buds and leaves.

Salt runoff also occurs in parks and open planters where salt laden snow is stacked without the corresponding tree health issues.  This is because uncompacted soils allow for runoff movement to flush salt out of soil. Background levels of salt may remain in soil when trees roots start to grow but not at high levels that may damage roots.

Recent case studies indicate that incorporating street water and associated seasonal salt loads into a Silva Cell system does not necessarily produce a negative outcome for trees.  Adequately flushing soils of salt or keeping salt out of soil altogether will reduce tree root mortality. Any application of salt in the winter should be closely monitored as part of the landscape plan. When certain design requirements are met, street trees and stormwater can co-exist in mutually beneficial way. Below are some examples of how to be successful:

Keeping salt out:
As integrating stormwater into Silva Cells becomes a more common design approach, engineers are starting to create bypass systems to keep winter runoff and associated salt out of the system.  This is commonly done where street water is coming through a catch basin.  A valve is installed on the distribution pipe that runs from the catch basin into the Silva Cells. The valve can be closed in the fall prior to the first snow and then opened again in the spring after the spring rain flush. This does mean that during “shoulder” seasons Silva Cells would not be operating as a stormwater system, however, this time period represents a small proportion of the total annual rainfall.

This sort of design may have higher maintenance and cost implications as valves will need to be manually closed from a surface port next to catch basins in the fall and be opened again in the spring.

Managing salt in Silva Cells:
A more common approach for addressing salt in a Silva Cell stormwater application is to include a robust water in and water out design so that spring rains will flush the bulk of the salts out of uncompacted soils.

The Queensway, Toronto
The Queensway project in Toronto is an example of this kind of design. This project is a monitored Silva Cell installation that has been in operation since 2008. Street and sidewalk water enters from catch basins through a perforated pipe and is distributed throughout the soil column.  A perforated drain line at the bottom of the system leads water to a downstream catch basin.  As is common in the northeast, the City of Toronto heavily salts their streets but, unlike some other locales, the trees here are healthy and thriving. The monitoring data shows that salts have been flushed from the soil column.  Similarly designed systems exist across North America and Europe.

Click here to read more about the Queensway project with monitoring data. 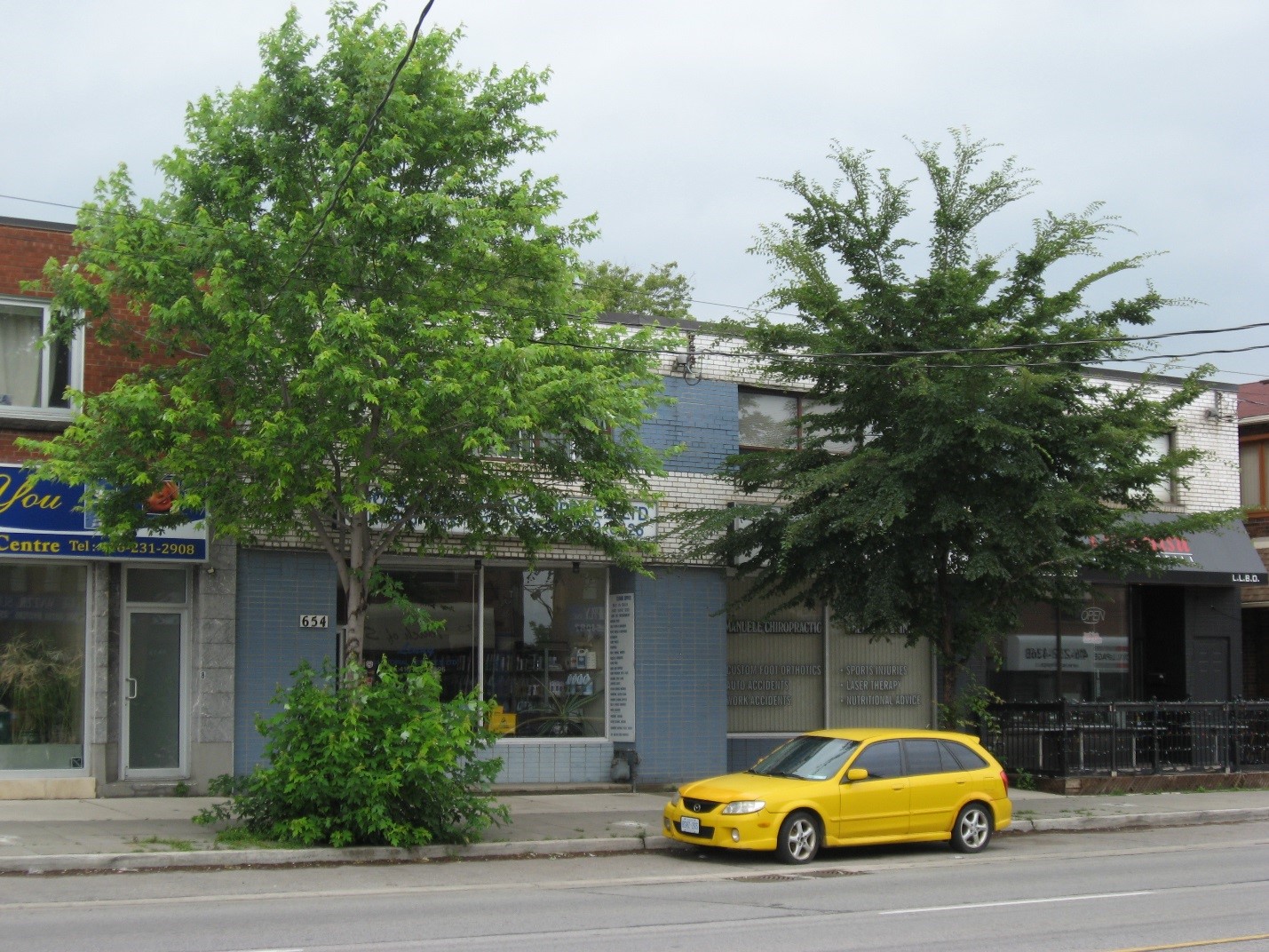 Bloor St.  – Toronto (water in)
Between 2008 and 2009, the City of Toronto installed Silva Cells along 8 blocks of Bloor Street between Church and Avenue Roads, a highly trafficked shopping district with wide pedestrian boulevards.  Silva Cells provided an average of 20m3 of soil per tree.  A perforated drain line was installed at the base of the Silva Cells and connected to the storm system.

The water in design captures water from the sidewalk and boulevard through a 1” slot drain in the sidewalk along the inside edge of the curb.  The slot drains are connected to mini catch basins that distribute water to the soil via perforated pipes underneath the Silva Cell decks. This design was  flawed, as the 1” slot drain  in the sidewalk was too small and is easily plugged by street litter or even a small amount of sediment.  The design was inadequate and could not provide sufficient amounts of water to the soil volume for either tree health or to flush salt from the soil in the spring.

Because this is such a high-profile retail street with wide boulevards, retailers along the street salted the sidewalks excessively believing it was necessary  to keep customers safe.  This increased the salt load considerably.  For the first two years the contractor had gator bags on the trees which served to flush the tree pits in the spring.  The trees were healthy and thriving.

After the maintenance period when the Gator Bags were removed almost, all the trees on Bloor Street died.  The  report  on why the trees failed sites multiple causes:

The city has recently replanted Bloor Street with a mix of species that are more appropriate for the Toronto climate and the BIA has taken on the task of watering trees with a truck.  The BIA has also instituted a plan to educate their members on reducing salt levels.

Click here to read more about the Bloor Street project. 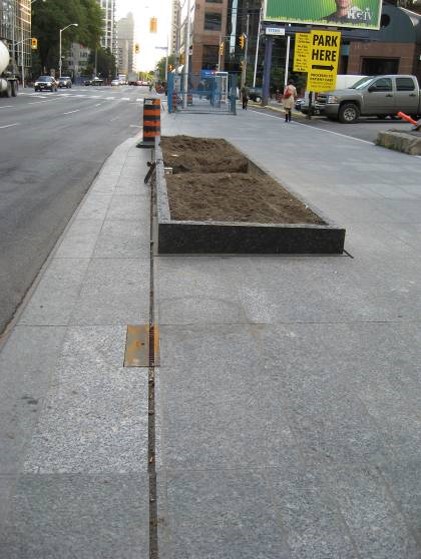 Queen’s Quay- Toronto (water out)
The revitalization of the Queen’s Quay was  designed as an integrated stormwater system.  The Silva Cells under the Martin Goodman trail capture all bike and pedestrian lane runoff which accounts for 47% of all surface runoff during a 100-year storm.  Due to the high water table along Queen’s Quay, it was decided not to install a drain line at the bottom of the Silva Cell system and to rely on ground recharge as well as an overflow pipe set higher within the intake catch basin.

The trees along the Queen’s Quay were doing poorly compared to other Silva Cell installations nearby. An investigation was launched using Ryerson University grad students.Similar to Bloor Street, several issues contributed to the poor tree response including high salt levels. Ryerson’s monitoring data found that salt levels near the tree pits were normal but deeper within the soil column, salt levels were elevated. This is consistent with what has happened elsewhere when a proper drainage system has not been provided to keep water moving out of the Silva Cells once it perks down to the base of the system.  Higher salt levels are seasonal and gradually disperse but the increase in salt concentration for an extended period of time did effect soil nutrient levels.

Click here to read more about the Queen’s Quay project.

Etobicoke Six Points
The City of Toronto’s “lessons learned” experience with integrating stormwater and Silva Cells has not dissuaded them from using an integrated system to meet their Green Standard regulations for integrating stormwater and street trees.  One of the largest redevelopment projects in the city, Etobicoke Six Points, is an integrated Silva Cell street tree and stormwater design that picks up both street and sidewalk water.  This project is currently under construction and is scheduled to be finished in 2019. 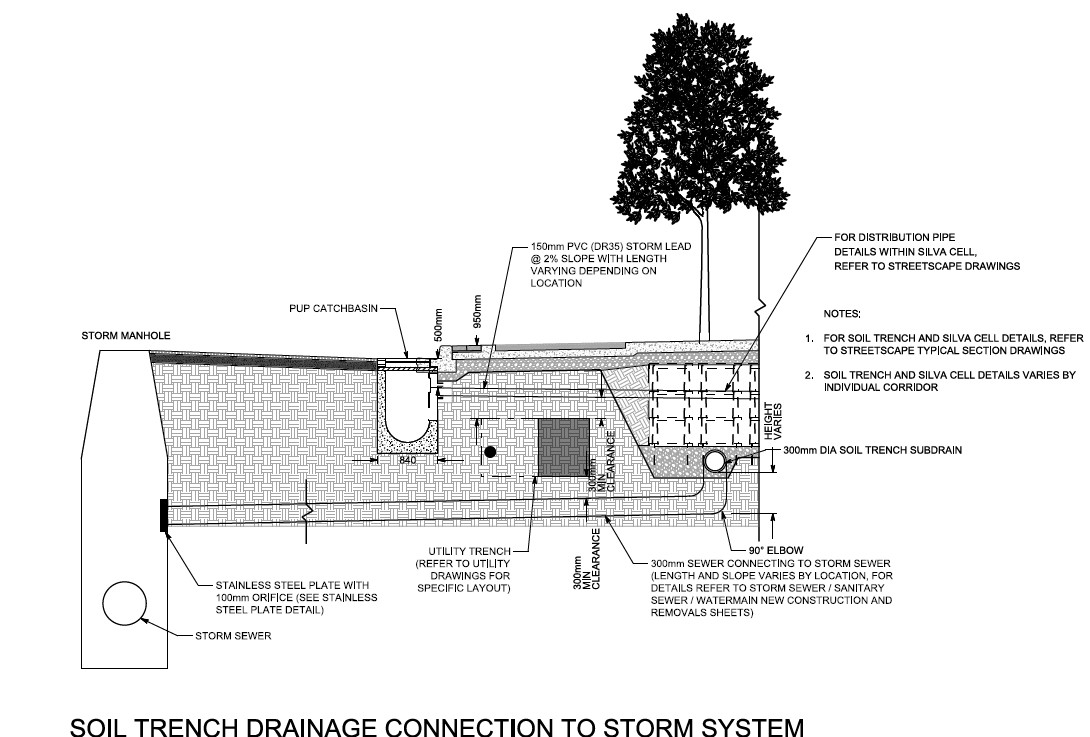 The TRCA, CVC, and the LSRCA all approve the Silva Cells as an equivalency to bioretention. You can find more stormwater design resources for Silva Cells here.