Impervious cover associated with roadways, parking lots, sidewalks, and rooftops feels necessary for the needs of people in the built environment, but can destroy the ecological integrity of the receiving streams that must accommodate all the associated runoff. Stream or river health is closely linked to land-use activities and pollutant management practices (or lack thereof) in the catchment upstream, which is one of the reasons why Low Impact Development and Green Infrastructure are so important to protecting or restoring streams and rivers around the world.

Impervious cover in a watershed can have detrimental impacts to stream ecosystems in two primary ways): (1) an increase the quantity and rate at which urban runoff is delivered to the channel (Figure 1) and (2) an increase in the pollutant load that is subsequently discharged. Stream ecosystem health is typically measured by conducting macroinvertebrate (bugs) or fish surveys. These surveys involve a biologist (or team of biologists) to collect, sort, and count bug and fish samples to determine the “biotic index.” Biotic indices consider type, richness, and the diversity of species present. 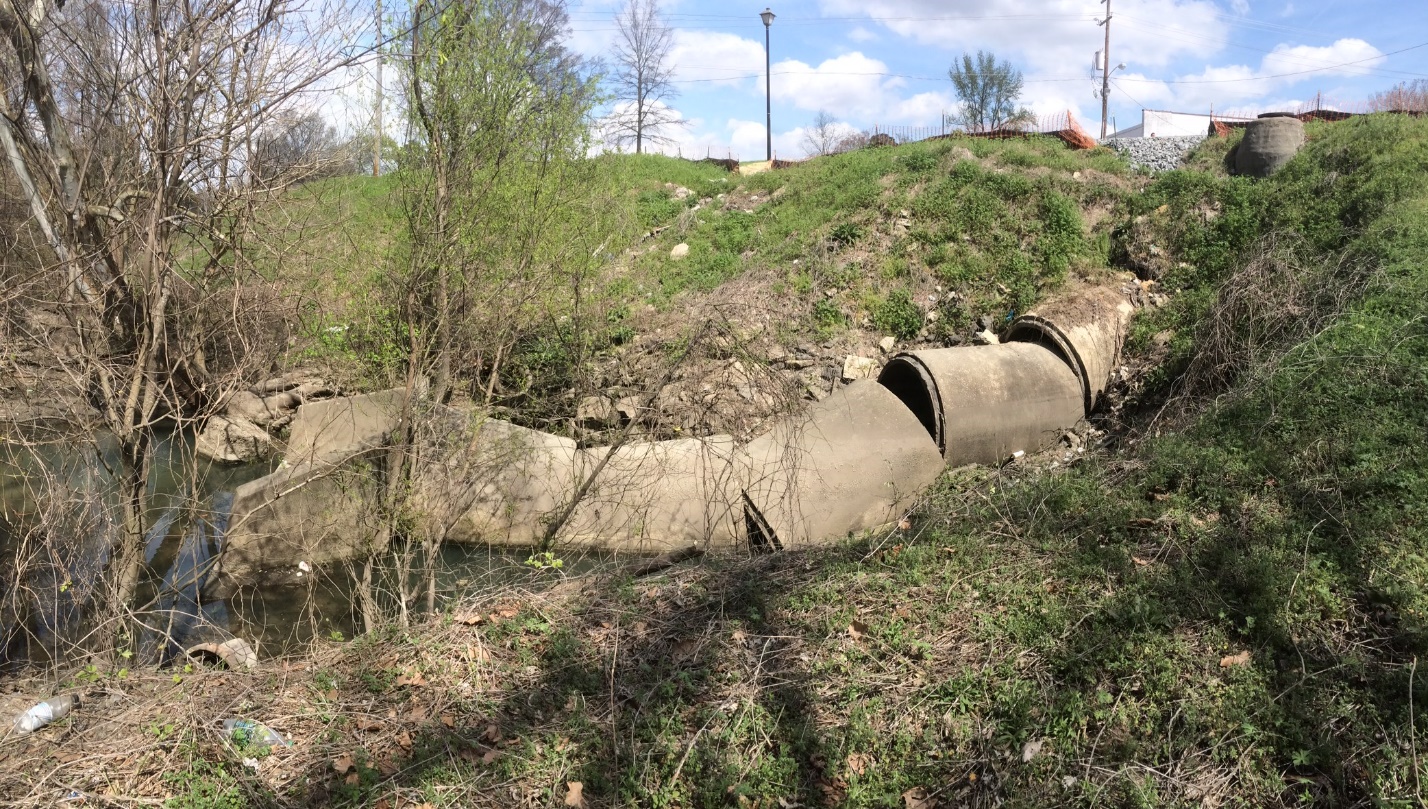 Figure 1: “Stream in a pipe” Conveying runoff from an urban area to a river. (Photo: Jonathan Page)

The Center for Watershed Protection has used the impervious cover model for many years to illustrate and communicate the significant impacts of modern-day development to streams (Figure 2). It shows clearly that as watershed imperviousness exceeds 10%, stream ecosystems will become negatively impacted and – beyond watershed imperviousness of 25% — actually non-supporting of aquatic life. An important note regarding the impervious cover model is that it assumes few or no stormwater controls in the watershed. At the time it was first being used in the late 1990’s (I was about 10 years old), stormwater management for the purpose of water quality protection was just starting come about – meaning there were a few ponds being used for flood control but there were was no Low Impact Development or Green Infrastructure movement yet. 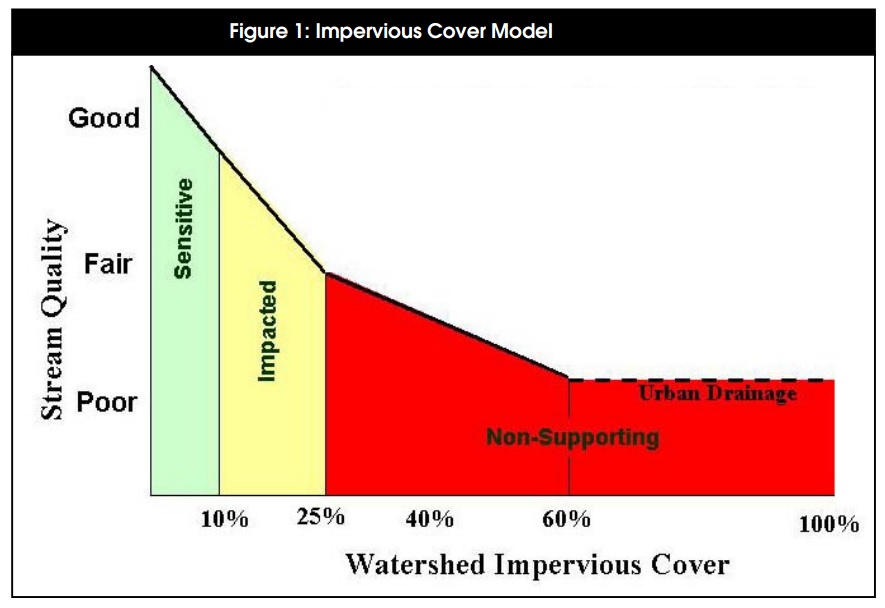 Consider a watershed that was once forested or had very little development. Perhaps there were a few pockets of residential areas and several roadways with impervious cover in the watershed, less than 3% overall. Then developers purchase a lot of land within the watershed to meet the housing and retail demands of a growing major metro area and imperviousness quickly jumps to 30% after the watershed is developed.

If developed traditionally, certain species of bugs and fish that are considered sensitive to changes in water quality or flow regime are the first species leave in a nearly immediate response. A few tolerant bug and fish species would be left, and biotic indices would be considered poor.

What if rather than using the traditional (gray) approach to construction, the developers employed Low Impact Development or Green Infrastructure to mitigate the impacts of impervious cover and protect water quality? We know from many field research efforts that these new approaches can control and infiltrate runoff and provide water quality treatment, but so far there is very little data to support complete protection of stream ecosystems. However, in theory – they should. A multi-year detailed monitoring effort of in-stream bugs and fish at multiple sites would be required to detect this.

Similarly, in cities and towns that have been “built out” or developed for many years, is it possible to retrofit our way back to a functioning stream ecosystem through redevelopment using Low Impact Development and Green Infrastructure?

Walsh et al. (2005) looked into this question in Australia. They concluded that the biggest impactors to the bugs and fish were the directly connected impervious surfaces. Directly connected means runoff is conveyed from the impervious surface to a pipe and then directly to the stream – there is no opportunity for contact with a permeable, vegetated surface. It’s good news that the impacts of impervious surfaces that allow runoff to flow over land or to a BMP (Like Bioretention or a Constructed stormwater wetland) before being discharged to the stream are mitigated somewhat. The study by Walsh et al. (2005) also helps us target retrofits in areas that have a lot directly connected impervious cover, where we can expect the greatest ecological benefit.

In these situations, there are always the questions of scale and cost to weigh. Consider this: how feasible is to suggest that retrofits are necessary to treat all of the impervious surfaces in Atlanta, GA so that we can restore the stream ecosystems? Probably not possible, and the cost would be incredibly high. But what if the focus was only on the directly connected impervious areas, those that are having the greatest negative impact downstream? The effort is likely more manageable and the cost more feasible (though still very high) and from the research by Walsh et al. (2005) we know that we are focusing on the areas for the greatest potential ecological uplift. This scenario has not been confirmed through field research yet, but we have good reason to believe it should work.

How practical is it to measure success by whether or not the bugs and fish actually come back after this catchment restoration effort? As an engineer, I would never recommend success criteria for a watershed restoration solely be centered on bringing the bugs and fish back to the stream. There are far too many other factors that are not controllable. Watershed restoration for the purpose of bringing back sensitive aquatic species is a noble and worthy cause, but I suggest focusing on the other measurable outcomes like instream nutrient concentrations, temperature, riparian buffer establishment, and decreased number of untreated outfalls. Ecosystems are dynamic and respond to restoration efforts at varying time scales. Efforts today may not be realized for decades.

Jonathan Page is an Extension Engineer at North Carolina State University, where he specializes in water resources engineering and ecological restoration. 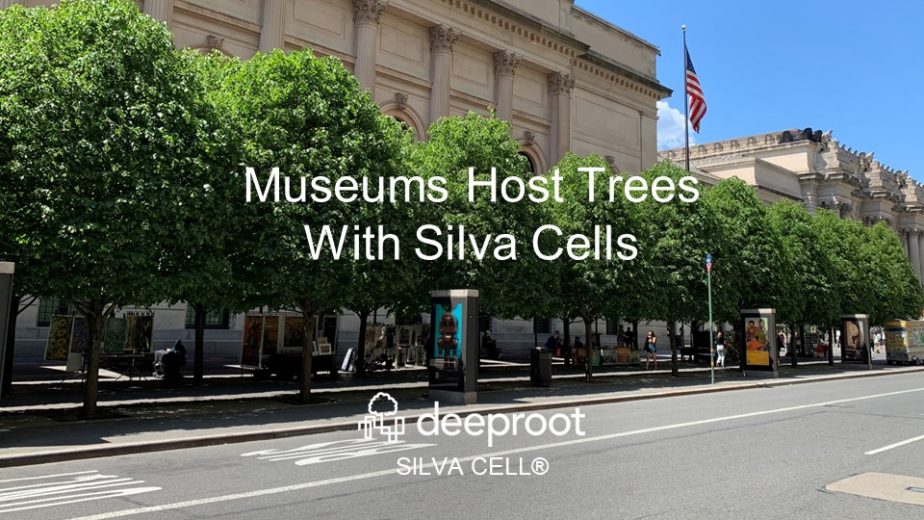