History of Street Trees in Holland Part 5: How About Them Dutch? 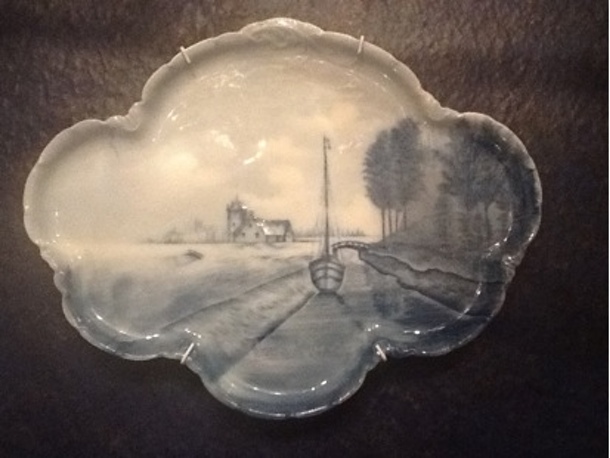 This is the fifth and final post in Peter MacDonagh’s series on the history of street trees in Holland. Today, how an ancient Dutch barge made its way to a Midwestern living room. -LM

In my Midwestern living room in the U.S., we have hanging on the wall a small blue and white plate. This little plate has a landscape depicting a distinctive Dutch barge with its sailing mast, on a tree-lined canal in Holland. The city that originated these types of plates, is another Dutch canal city – Delft. It became a pottery powerhouse after digging up its fine white clay, dyeing it blue, then selling and exporting this porcelain for sale around the world, doing double duty as shipping ballast in holds of the VOC fleet. The Dutch who invented the term “landscape” showed the unique scenes of their success – tree lined canals, on their exported “Delft” ware.

When I was a wee lad visiting relatives in rural parts of Ireland, dishes of any kind, to my great confusion, were referred to as “Delft.” This is similar to all tissue being referred to as “Kleenex.” My wife unwittingly purchased this small Delft plate with a scene of Dutch commerce with money, once destined for Holland. The merchant burghers of Amsterdam’s past would be proud of what their export economy wrought: tree lined canal scenes on a plate, leading to another sale.

So, how about them Dutch? Unlike their Spanish overlords, the Dutch hand-built their country out of the North Sea. They created a wind- and solar-powered land draining transportation canal system that drove the first true modern export economy in the world. This Low Country population, made up primarily of various mercantile and religious refugees, also invented stock markets and the futures market.

Dutch expatriates founded New Holland, and its capitol New Amsterdam (now New York). In 1653 the Dutch launched what would become the largest of all stock markets, you might have heard of it – Wall Street. In 1792 Dutch descendants (Bleecker, Anspach, Seixas, and 21 others) signed Wall Street’s self-regulating “Buttonwood Agreement” under a very large Buttonwood or American Sycamore street tree (Platanus occidentalis). This was a very auspicious boost for street trees in America, and as the science confirms, where street trees go and grow, wealth follows.

It was these arboriculturally and horticulturally inclined Dutch, tree and tulip lovers really, who supplanted the gold-and-silver-enriched Spanish as Europe’s dominant sea power. One could almost say that “plant power” drove, and continues to drive, the Dutch economy.

Lawrence, H.W. 2006. City Trees: A Historical Geography from the Renaissance through the Nineteenth Century. University of Virginia Press. Charlottesville VA.