In 2017 I authored a DeepRoot blog post that discussed tree equity and the disproportionate impact a lack of both tree canopy and access to green space has on poor and minority communities.  Many people wondered what was being done to solve these issues and what individuals might do within their own communities to help narrow the “green gap” between wealthy and lower income neighborhoods. This past fall in Minnesota, a small group of locals took things into their own hands.

Founded by a group of small business leaders in the Twin Cities, a new nonprofit called The Autonomous Collective brings together like-minded individuals under a common goal of sharing knowledge and resources to help forge connections between people and nature. The group addresses communities with a simple, direct approach – in one project’s case, that being to simply plant more trees. Autonomous Collective founders Jason Rathe from Field Outdoor Spaces, Jim Walsh from Vineland Tree Care, and Steve Modrow from biota Landscapes came up with the initial idea. Jim recalls, “We were talking over a beer about how somebody should really do something to make sure that we re-tree the urban forest… and realized that we were that somebody.” Soon after, the NoMi (North Minneapolis) Tree Planting Project was born.

The Autonomous Collective decided to focus on North Minneapolis and specifically areas impacted by the May 2011 tornado and the emerald ash borer (EAB). The loss of canopy in North was not quickly improving post-tornado and the Park Board and city foresters had been forced to use much of their budget to take down EAB infested trees instead of planting new ones. The group proposed that if they raised adequate funding, they might utilize existing personal and professional connections to reach out to Tree Trust, an area non-profit focused on reforestation. Tree Trust had the staff capacity to coordinate volunteer community events so the Collective approached them to explore collaborating and combining resources. Through this partnership, the Autonomous Collective was able to work within Tree Trust’s existing North Minneapolis-specific program, created in response to the 2011 tornado.

With this partnership came the opportunity to utilize Tree Trust’s gravel bed nursery, which grows vigorous young trees for community planting. The first step was fundraising.  Tree Trust set up a CrowdRise site and engaged several Twin Cities design/build companies in a fundraising challenge. Each participating company had their own fundraising page and some used the page as a sole source of raising money, while others created additional marketing campaigns via events, business websites, print marketing, and personal outreach. Each company set a fundraising goal and competed to see who could raise the most, which resulted in a friendly competition where the true winners were the residents of North Minneapolis. Soon, donations topped $25,000, and the next phase of the project began – organization.

During the six month fundraising window, Tree Trust acquired sites for planting, provided education to homeowners on tree care, grew trees in a bare root gravel bed, and organized logistics for planting day. The fundraising closed several weeks prior to the planting day event in order to understand the final budget available for the project.

The participating companies acquired volunteers for planting day through a network of employees and friends. The event began with a kickoff gathering at Folwell Park – the epicenter of tornado damage in North Minneapolis. Donuts and coffee were made possible by fundraising dollars and motivational words were spoken by Minneapolis City Council President, Barbara Johnson. 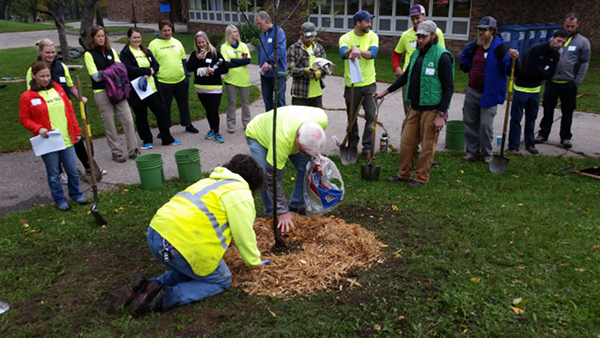 A tutorial was given by Tree Trust which demonstrated the proper way to plant bare root trees. Volunteers were divided into small groups of 3-4 people and given maps of where the trees would be planted. Each group was responsible for 10-12 trees. From there, some teams headed to area homes while others stayed in parks. After putting over 125 trees in the ground, the teams had earned a meal and a cold drink. Continuing to use existing networks to solicit donations, the groups were able to wrap up the event with lunch at a local North Minneapolis brew pub on the Mississippi River.

The project did not come without challenges.  The Autonomous Collective had to figure out how to reach as many people in North Minneapolis as possible which resulted in trees being planted in both private yards and public parks.  A large percentage of North residents are renters, a fact that presents numerous challenges to area tree planting programs as tenants do not often have a say in what goes into their green spaces and landlords tend to live offsite and are unable to water and maintain newly planted trees.  By placing as many of the trees in public spaces as possible, the Collective insured that they would reach at least some renters while also working with area homeowners to plant in yards.  In the grand scheme of things, a new tree in a neighborhood lacking canopy makes a positive impact, no matter where it is planted. 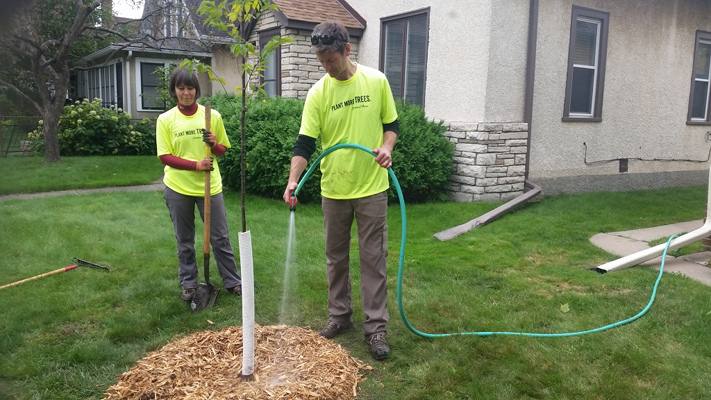 After the definitive success of their first event, the Autonomous Collective is partnering again with Tree Trust in 2018 with the goal of doubling the fundraising efforts of last year. Their primary motto continues to be, “do – don’t just talk.”  Some tips the Collective has for people interested in creating their own charitable event are:

The Autonomous Collective’s grassroots approach can serve as an inspiration to us all. Grassroots organizations derive their power from the people and engage ordinary individuals to reach a goal. If you have a cause you are passionate about or see a project waiting to be completed, consider whether your own movement could meet the needs of your community. Often small and nimble, grassroots organizations can act more quickly than larger non-profits and can give community projects the boost they need to get up and running. It often takes just one person to initiate the momentum needed to create a movement. Might that person be you?