“Right tree, right place” is easier to do in Ohio thanks to the Urban Site Index (USI), a tool for assessing soils and planting sites developed by OHDNR regional urban foresters Alan Siewert and Stephanie Miller. By observing various tree species in various sites, site ratings for different tree species can be developed for various regions and inform future planting choices. In this article we interview Alan about the development and use of the USI and its evolving future. Could it be adapted for your community?

Alan, tell me about your background.

I have a Bachelor of Science degree in Forestry with an urban emphasis, and am a Certified Arborist and Municipal Specialist, Board Certified Master Arborist, and was a Certified Tree Worker for a long time.

I’ve been with the Division of Forestry at OHDNR 26 years. I am one of 6 regional urban foresters for the state of Ohio who provide organizational and technical assistance to the municipalities in our area. I deal with 80 to 100 cities annually and am one of the Tree Commission Academy instructors.

It’s an 8-day-long training class where we teach arboriculture, urban forestry, municipal government, and human relations. Most attendees are volunteers who will become local Tree Commissioners. Their job is to investigate and study the management of the urban forest and make recommendations to the city council. 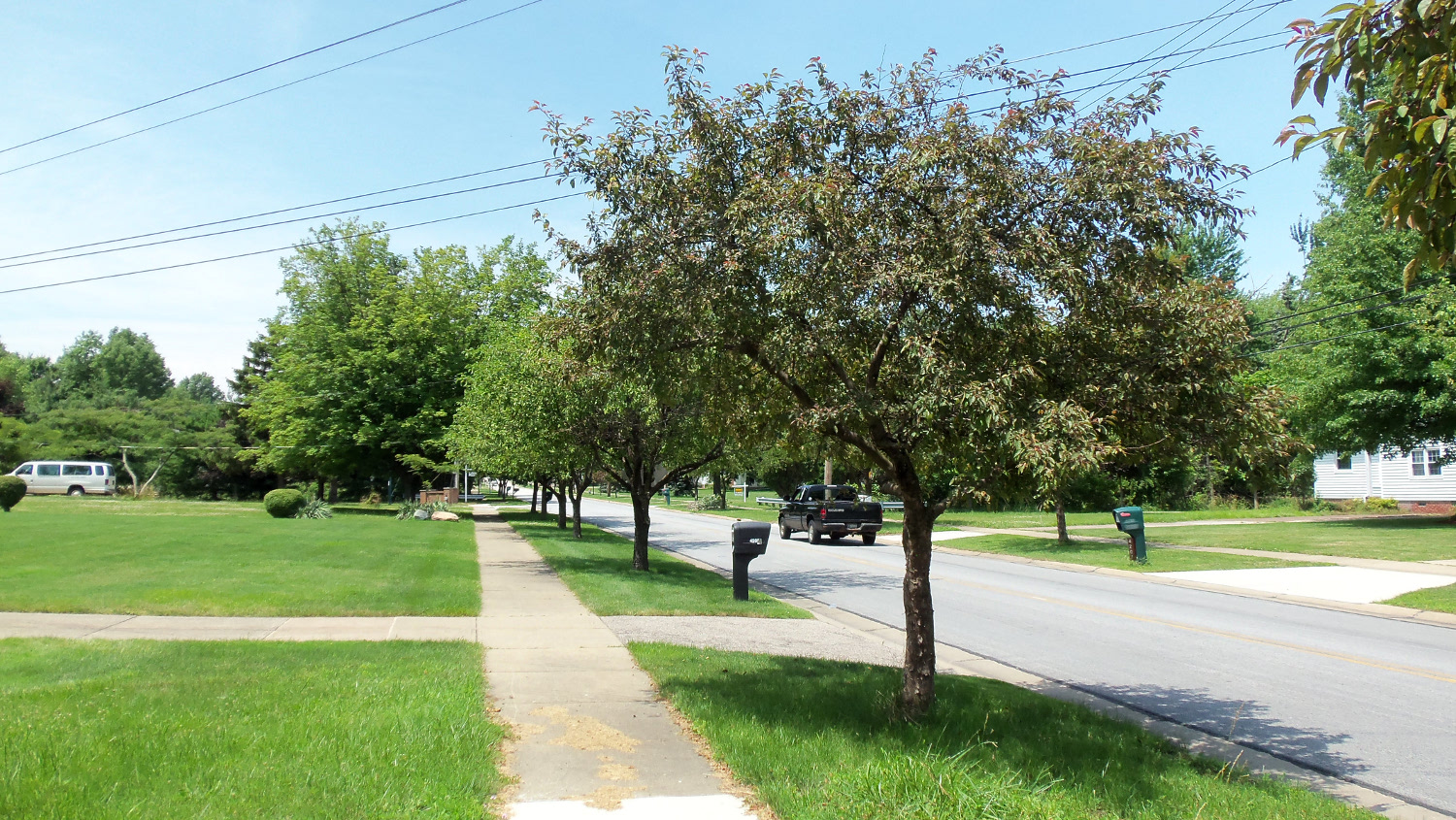 What was the inspiration leading to the development of the Urban Site Index (USI) – why did you and Stephanie Miller feel it was a worthwhile and necessary tool?

At Tree Commission Academy, we teach “the right tree in the right place.” Size is important because we see a lot of sidewalk conflicts. But it’s not just about planting small trees to avoid any conflicts at all, because then you lose the reason for having an urban forest – the ecological benefits and services they provide. We need canopy, and small trees don’t provide canopy.

Diversity is another factor. Rather than planting tough trees everywhere, we want to be able to take some of our more sensitive trees and plant them in the better sites. That increases our species diversity.

When Stephanie and I would talk about this in our Tree Commission Academy classes, we got a lot of blank stares. It dawned on us that because of our experience and education, we could look at a site and see “oh, this is a tough site” or “this is a pretty nice site.” But the average person couldn’t do that. We needed a rapid assessment process to make it simpler and faster.

We developed 8 factors – 4 soil measurements and 4 street measurements – that anyone could use with minimal training to assess the suitability of a site for different common types of trees. In traditional forestry, a “site index” is a measure of the characteristics of the soil that will predict the height of a species of tree in 50 years. If a given soil has a site index of 85 for white pine, you know that in 50 years if you plant white pine there it will be about 85 feet tall.

After developing this rapid assessment, it occurred to me that this is site index, but in urban areas. We’re measuring the soil, and instead of predicting the size of the tree, we’re predicting its ability to grow for different species.

Can you briefly explain how it works?

The USI is a rating system that uses 4 soil factors (vegetation, surface compaction, probe penetration and soil development) and 4 street factors (speed limit, number of lanes, existence of on-street parking, and length between traffic control devices) to rate the viability of planting sites for urban trees. Based on these 8 observations, the site is rated with a number from 1 (worst) to 20 (best). Depending on the rating and a number of other factors – such as species diversity goals – you can quickly decide what tree is most suitable for the site. 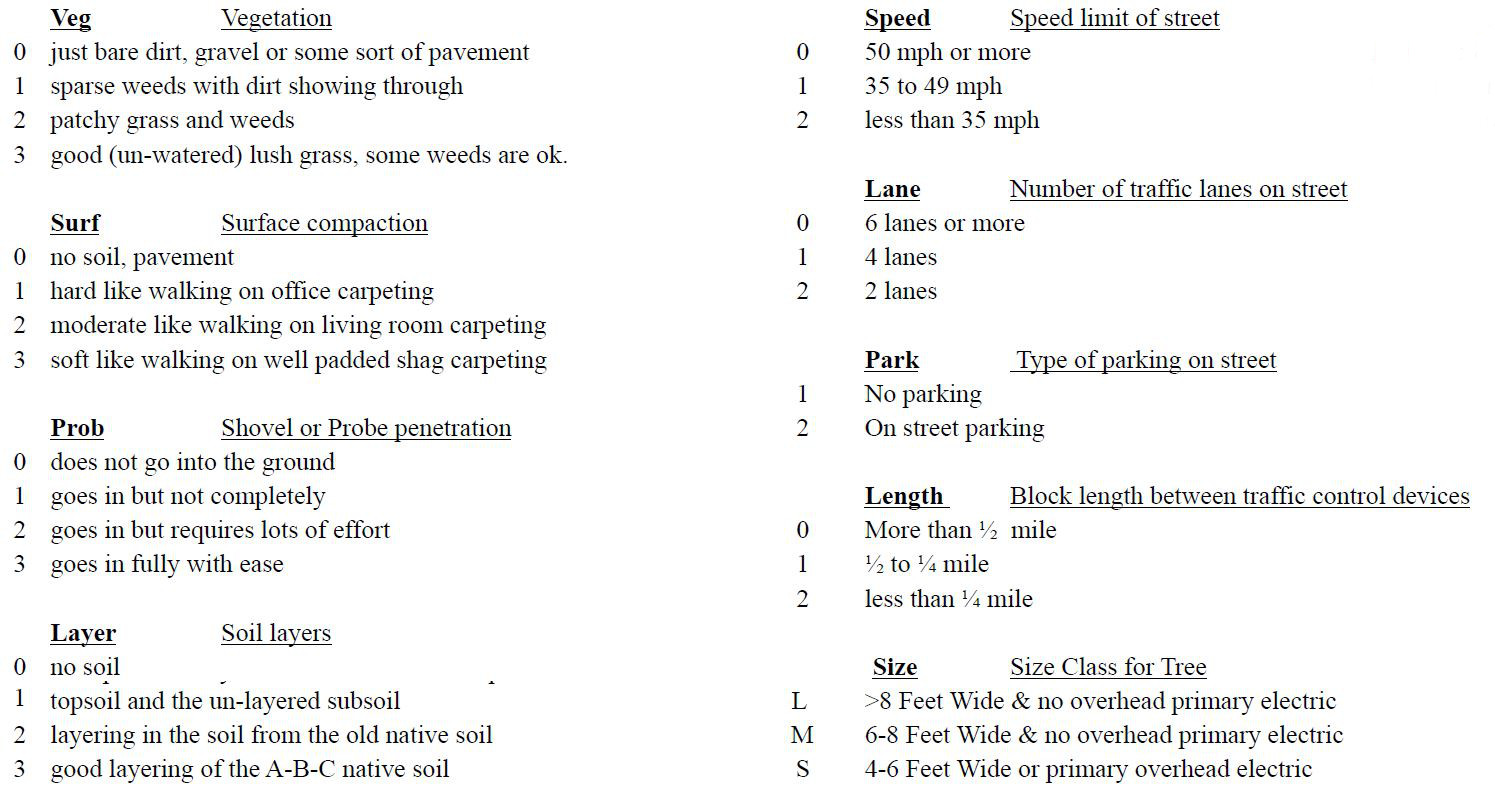 Who is the ideal audience for this tool?

It’s designed for municipalities, for the city forester who is managing a street tree population. We wanted it to be cheap, effective and efficient. It was designed to work with traditional tree lawns [a.k.a. park strips]. (It doesn’t work in parks,  or planting pits [a.k.a. tree wells or tree basins]. In planting pits, soil quality, volume and drainage can all be different from one location to the next, even on the same block. In my opinion, the USI cannot be an accurate predictor of tree success in this type of planting location.)

Just how efficient is it?

Volunteer Tree Commissioners or city personnel can do a block assessment in less than 2 minutes, that’s how fast it goes. One person drives, the other person jumps out and looks at the soil, collects the data, and within a few minutes you’ve got a couple of blocks done.

It’s something that is realistic for a city to get accomplished, which was important to us, and is probably faster than a street tree inventory. Once that data exists, then you know what you can plant. 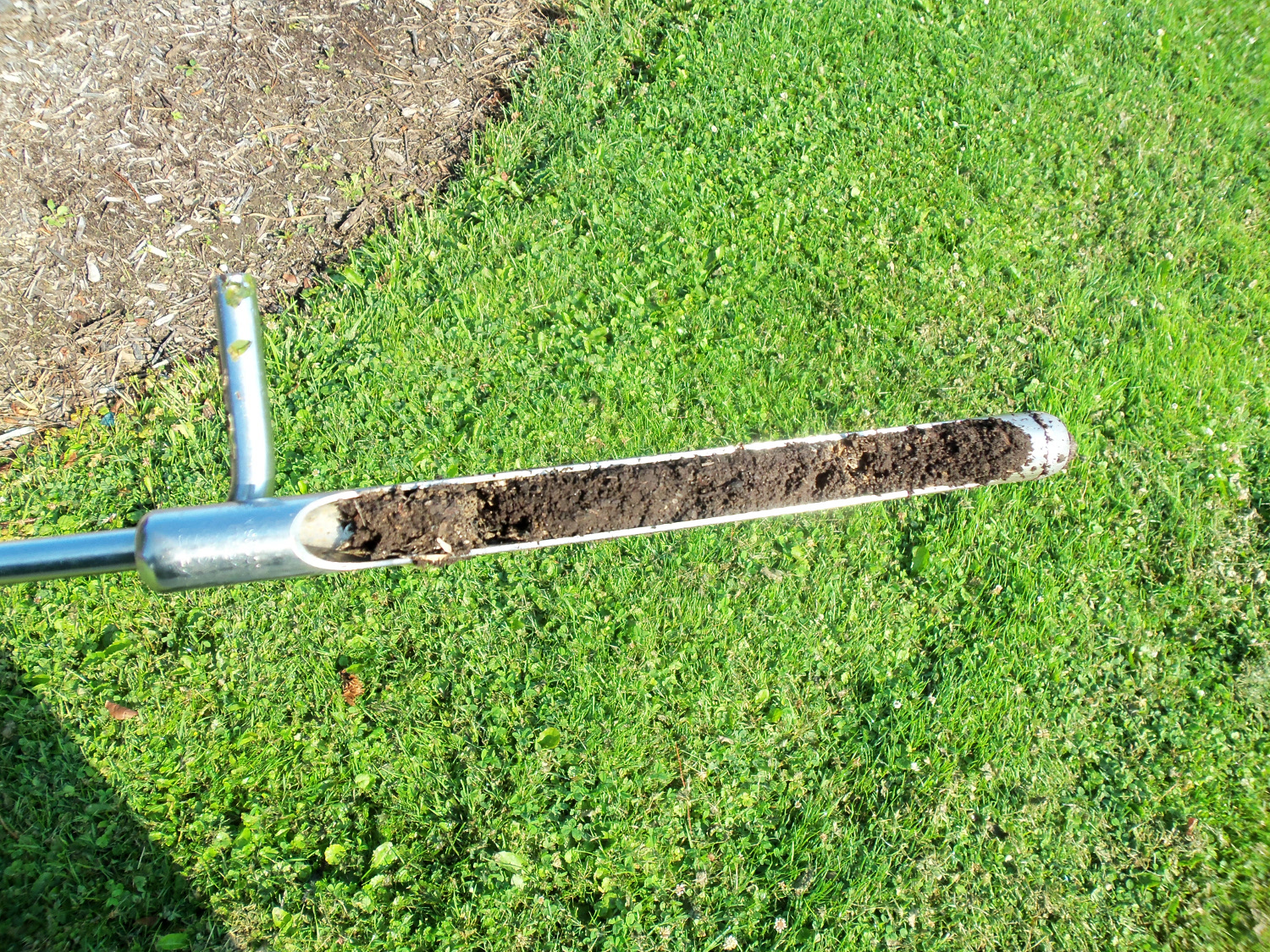 Why were these four soil factors chosen and what tools are needed to measure them?

The vegetation, our first score, uses what’s growing there as indicator plants – if weeds aren’t going to grow there, a tree’s not going to grow there. When you’re walking on the soil, you’re using your feet as a compaction meter. The probe or shovel going into the ground is the poor man’s penetrometer. The soil profile looks at the organic content, the soil development and the age of the soil.

The USI doesn’t measure anything directly; it measures lots of things indirectly. For a municipality that’s all you need. 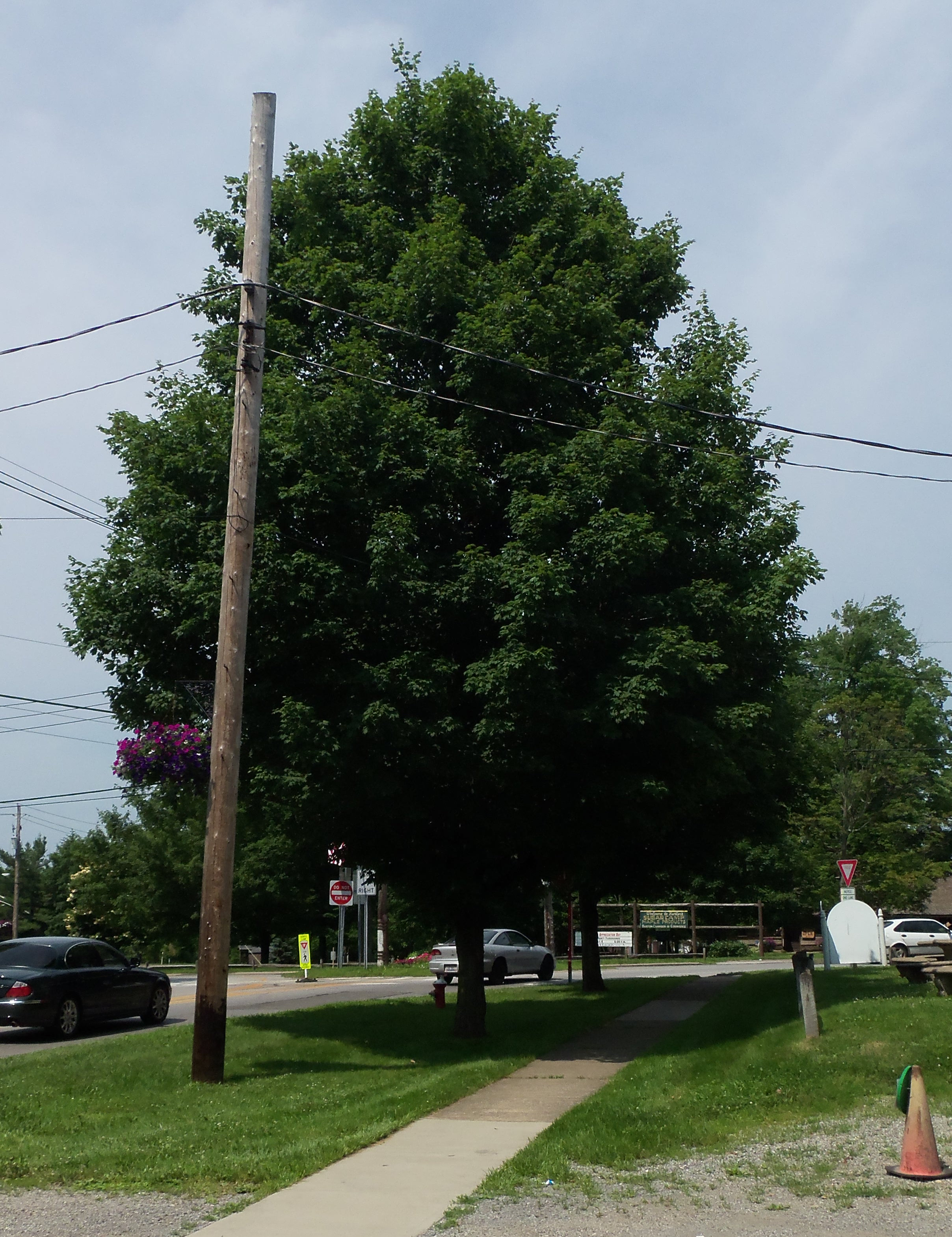 How does the USI help you choose trees for a given site?

The USI is just a number between 1 and 20. It doesn’t mean anything until you can match it to trees. We divided the list of trees we can grow around here into 3 groups: sensitive, intermediate, and tough, and then guessed the USI range they were most suited to. So you’d use a tough tree on a poor site, a medium tree on an intermediate site, and a sensitive tree on a good site.

Tell me about how you tested your assumptions.

In order to start testing it, we would go out and look at established stands of trees – 4 or 5 trees of the same species on a tree lawn.  They had to be large enough to be past transplant shock and all the transplanting errors that happen, but not so big that they could get up into the yard behind the sidewalk and gather their nutrients from there. We wanted them to be gathering the bulk of their needs from the tree lawn.

Do you and Stephanie make adjustments to the USI as new data is gathered?

We’re continuing to collect field data on the minimum number for species.  Stephanie works in northwest Ohio where the pH is typically higher than where I work in northeast Ohio. These lists and tables need to be adjusted for a given region, so we continuously tweak them. Someone in another area could use the same factors to rate a site, but it would have to be adjusted for their conditions. 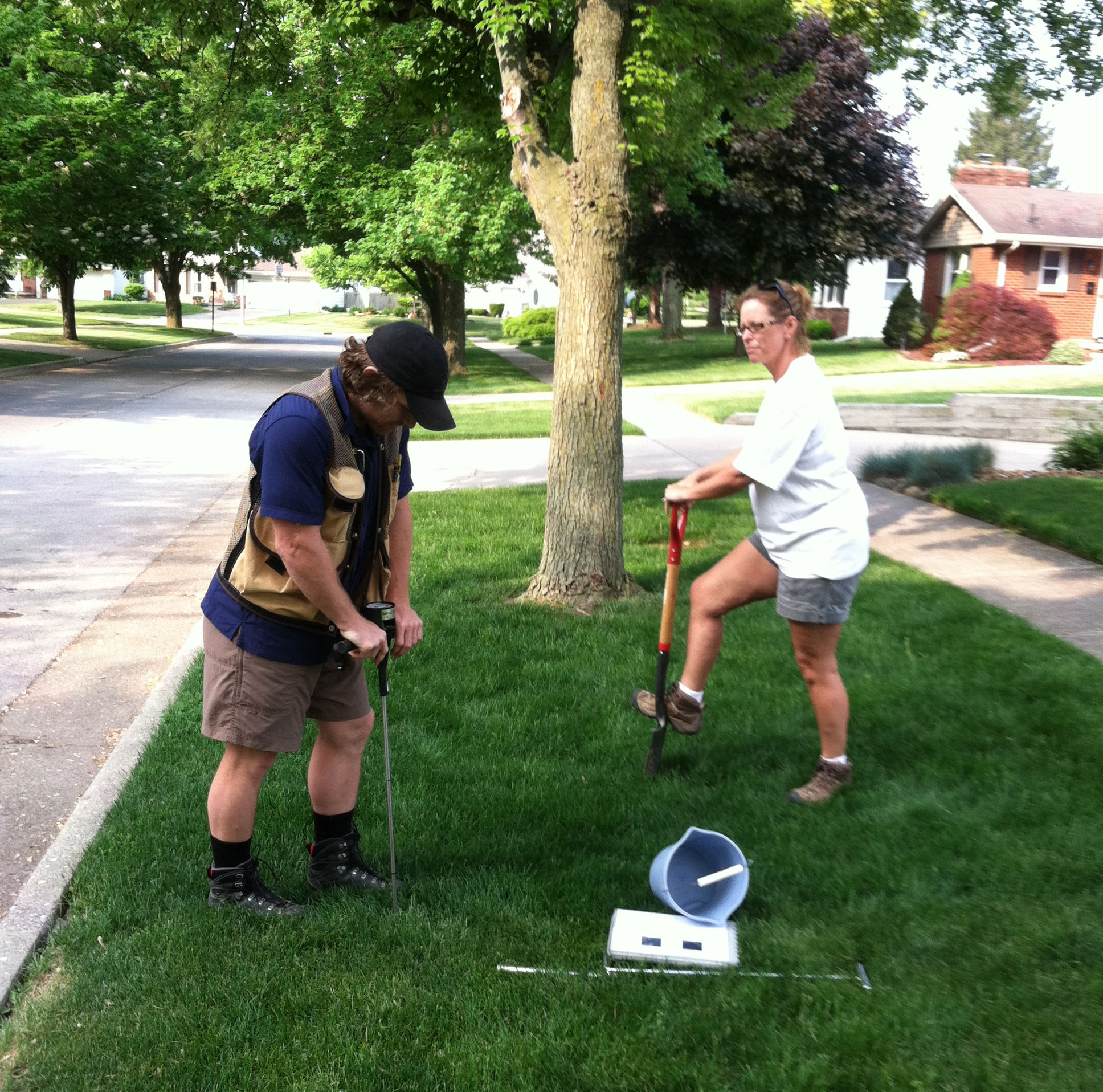 How is the data used once it’s collected?

Our information is critical to develop what we call a Master Planting Design for a community. A given block – a distance where you can plant 7 to 11 trees on one side – is called a segment. We collect the USI data and the width of the tree lawn in each segment and map it all out. We use pretty colors, and it’s quite fun. If you passed kindergarten, you can probably do this.

Then we can generate 9 separate lists of trees based on size (large, medium and small trees), and toughness (sensitive, intermediate and tough). So you have large tough trees, large intermediate trees, and so on. The only way we have figured out how to get diversity in our urban forest is to create the entire planting plan at one time based on the USI data, and then reviewing it annually. By doing this, you can ensure not only species diversity but spatial diversity. Then from there you can get temporal diversity, different ages. If we have 100 planting sites, we plant only 5% in a given year, so we don’t get a “baby boom” in our population.

If you do all your planning at one time, how do you handle the inevitable changes to the city and the trees?

You can write a plan for the urban forest but things change, as we know. Engineers may dig up one or more segments, changing the USI rating. New diseases come along. Part of our teaching is that you review all that stuff. 15 years ago, ash was a great tree for us and it would have been used in the mix. Once Emerald Ash Borer appears, then we have to go in and take Ash trees out of the plan and replace it with another species.

Stephanie has used the USI information to get the engineers to re-think their soil practices when replacing utilities. Typically they take the topsoil off, and put the topsoil in the bottom of the hole and get the garbage from the bottom and put it on top, or they fill the hole with gravel because it’s easier to deal with. That changes the USI rating significantly unless we can communicate with the engineers in advance.

How many cities use this tool?

Since 2011 or 2012 perhaps a dozen or two dozen cities across Ohio have a master plan in place using the USI data. There are a lot of others that are in various stages of development. We hope to have 75-year rotations on our street trees, so it could be 75 years before the plan is completely engaged or established. We’re going to be gone before we’ve had a chance to see the process work fully.

The USI is being tested by different researchers. Morton Arboretum has developed an Urban Site Index that looks at 15 soil and site parameters and rates a site from 0 to 100. Can you tell us about your collaboration with Morton Arboretum?

Stephanie and I were invited to do a talk at Morton about the USI. The first speaker was Dr. Bryant Scharenbroch; he had taken about a dozen or two soil variables, trying to predict tree growth. We’re sitting there and a colleague leaned over and said “That’s what you guys have already done.” Then I got up to give my talk and said to him, “We don’t have hundreds of thousands of dollars to do this work, we have a shovel.”

Bryant saw that and contacted us the next year and said he wanted to see if the USI had picked up the right things and was reliable. Could he add another step to make it more reliable for different uses? So he came to Ohio, did a bunch of sites here, and has been working around using his Advanced Urban Site Index, which uses a bunch more variables.

What’s next for Ohio’s USI?

Division of Forestry is working on a couple of how-to documents to help people use and adapt the index. We just went through a website rebuild last year. It’s mostly up except for the toolbox, and that’s going to be the key. In the toolbox will be USI information and the list of trees for various regions of Ohio for various USI numbers. There will be a list of instructions on how to use the USI in your community and instructions on how to ground-truth it and make your own list.

In 2018 we hope to make a big splash in our home state, when the International Society of Arboriculture show will be in Columbus. When the world comes to visit us, we’ll have something to show. That’s the plan.