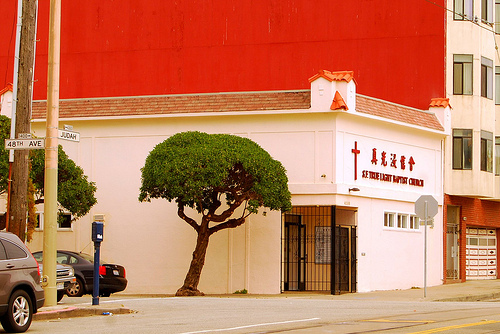 A few weeks ago I was in a meeting with the chief of staff for a San Francisco supervisor. She mentioned that there are entire areas of the city — those that are predominantly Chinese and Chinese-American — where city tree planting is very limited due to cultural beliefs in feng shui. I’d heard the term “culturally-sensitive” applied to community plantings before, but had never realized it might outright limit street tree placement.

It turns out that this is a difficult topic to research. I’m not sure if that’s because it can be a touchy subject or if it’s just an accepted fact of designing within a multicultural context. I was only able to find two articles about it, each of which explored the issue differently. This one, from June 2000, is a basic overview of how community involvement can greatly affect the care and maintenance of trees — or lack thereof in areas where street trees are thought to negatively impact feng shui.

This one, from March 2008, examined the issue more directly. According to Steven Post, founder of the Geomancy/Feng Shui Education Organization, placing a street tree directly in front of the entrance to a building can block the movement of chi (energy). Shifting the tree placement to a few feet away on either side of the door should solve the problem, and confusion over this issue needn’t lead to a dearth of trees entirely. As he explains in the article, “This is simply a misunderstanding of feng shui to think that trees on your block will disrupt the flow of energy […] Planted properly, a tree only adds vibrancy and life to a community.” Feng Shui News agrees, saying that “Trees, bushes, and thick plantings surrounding a property can also act to shore up energy which would otherwise flow away.” Are concerns about feng shui an issue in other cities? A completely unscientific poll that I did among arborists and urban foresters on LinkedIn indicated that it is.

According to San Francisco non-profit Friends of the Urban Forest Program Director, Doug Wildman, they have observed reluctance toward tree planting in certain neighborhoods, particularly the Sunset and portions of the Richmond (both of which are predominantly Chinese neighborhoods). Some of the households where this was an issue were Chinese and did not always understand English fluently, so FUF sought help from Chinese speaking volunteers to determine why people did not want trees. Concern with tree placement and trees blocking the positive chi entering the home was one of the common explanations they were given, which in their estimation was due to a misunderstanding of the principles of feng shui. To address these objections, FUF has arranged for two events over the past 11 years to discuss the role of feng shui in street tree planting, both of which were led by the Grand Master of the Black Sect Tantric Buddhism, Professor Lin Yun, and translated into English.

Both of the events held by FUF were well attended, but — at least after the 2006 meeting — FUF’s community outreach coordinator concluded, “What I suspect is that a lot of people are just using feng shui as an excuse because they don’t want to have to deal with caring for a tree on their property.” Wildman feels there is more to be done and sees a powerful educational opportunity, saying, “We need to get the word out and appeal to home owners that we are sensitive to the best possible tree location reviewing city ordinances and feng shui theory.”

As street trees continue to earn recognition as critical tools for green infrastructure in the built environment, I see these issues becoming more and more important. Should cultural-sensitivity trump green infrastructure initiatives and goals that encourage citywide tree planting? It seems that they are not mutually incompatible, and developers and cities needn’t immediately acquiesce when feng shui is raised as an objection. In the meantime, I hope Friends of the Urban Forest and other groups like them will continue to make headway in educating residents about how trees can make a positive contribution to the principles of feng shui.