Mei Ling Hui has been with San Francisco’s Department of Environment since 2007, first as the Urban Forestry and, more recently, the Agriculture Coordinator. Along with her main role in those programs, she provides support to the Climate, Environmental Justice, and Toxics Programs, serving at the intersection of many public stakeholders. She provides staff support to the Urban Forestry Council, which includes producing their Annual Report on city-wide urban forestry programs. She developed and runs the Urban Orchards Program, which has planted hundreds of publically accessible fruit trees across the City through San Francisco’s Carbon Fund. Mei Ling is the urban agriculture representative on the San Francisco Food Security Task Force, serves as a San Francisco representative for the California Food Policy Council, and is part of the San Francisco Carbon Fund steering committee.  Prior to working for the City, Mei Ling was a Planting Manager at Friends of the Urban Forest, San Francisco’s urban forestry nonprofit. She holds a degree in Culture, Ecology, and Sustainable Communities, with an emphasis in Ecological Agriculture.

Sounds like you have a lot on your plate! Describe a “typical” day at work.

I’m not sure I have a “typical” day. We have some field work, visiting sites where we might be working on a special project, or for a grant application or reporting. But for the most part, it’s desk work.

I manage a few grants, work on Urban Forestry Council documents, run or attend public meetings for a handful of city bodies. When I was studying for a career in the environmental field, my classmates and I all thought we’d be tree-sitting and saving the whales, but it turns out we mostly just work on spreadsheets.

San Francisco’s fragmented maintenance structure is one of the biggest challenges facing urban trees (until recently, city crews maintained about 40% of the street trees while private property owners maintain the rest). What are some of the proposed solutions for this problem?

The City’s Urban Forest Plan, Phase 1: Street Trees was adopted last year, in 2015. The Plan identifies a long-term vision for the City to take over maintenance of 100% of San Francisco’s street trees.  Of course this would require significant funding. There are discussions underway that are focused on developing a proposal for how a citywide municipal street tree program could be funded.  The Street Tree Financing Study outlines several funding possibilities. We’re looking forward to seeing what comes out of those discussions and I hope that the proposal moves forward.

Limited space and high land costs are among the biggest impediments to growing food in San Francisco. Why is it important to grow food here anyway, especially urban orchards?

People want to plant fruit trees in this city. I hope that supporting people’s interest in growing food will foster to an interest in the care of trees in general, increasing tree advocacy and knowledge in our citizens.

Fruit trees require less maintenance than vegetable beds, so they can be planted in sloped or otherwise less accessible areas.  Finally, although growing food locally does increase food security in preparation for natural disasters such as earthquakes, the community building among neighbors working together in their orchards and gardens is even more vital in disaster preparation. 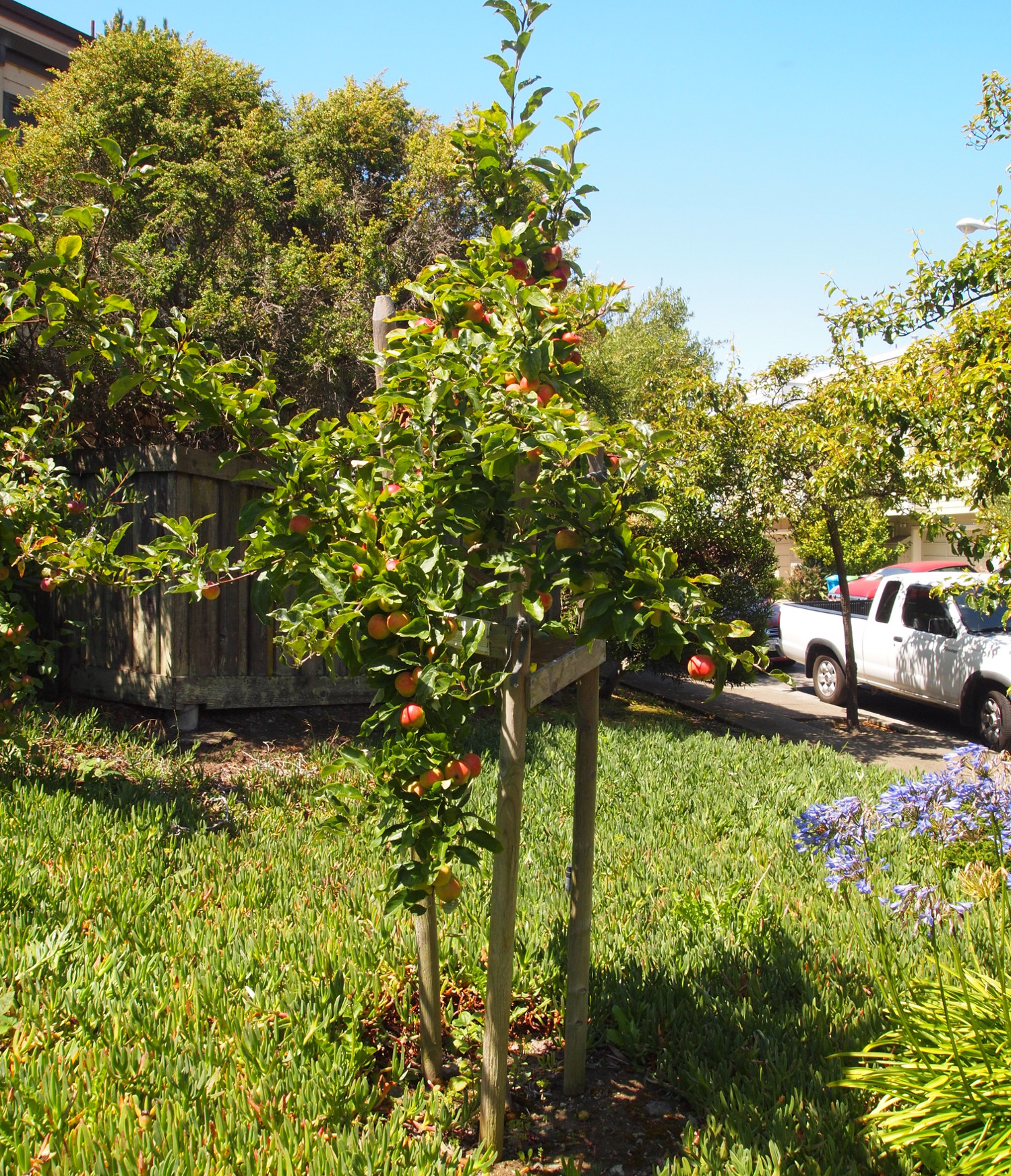 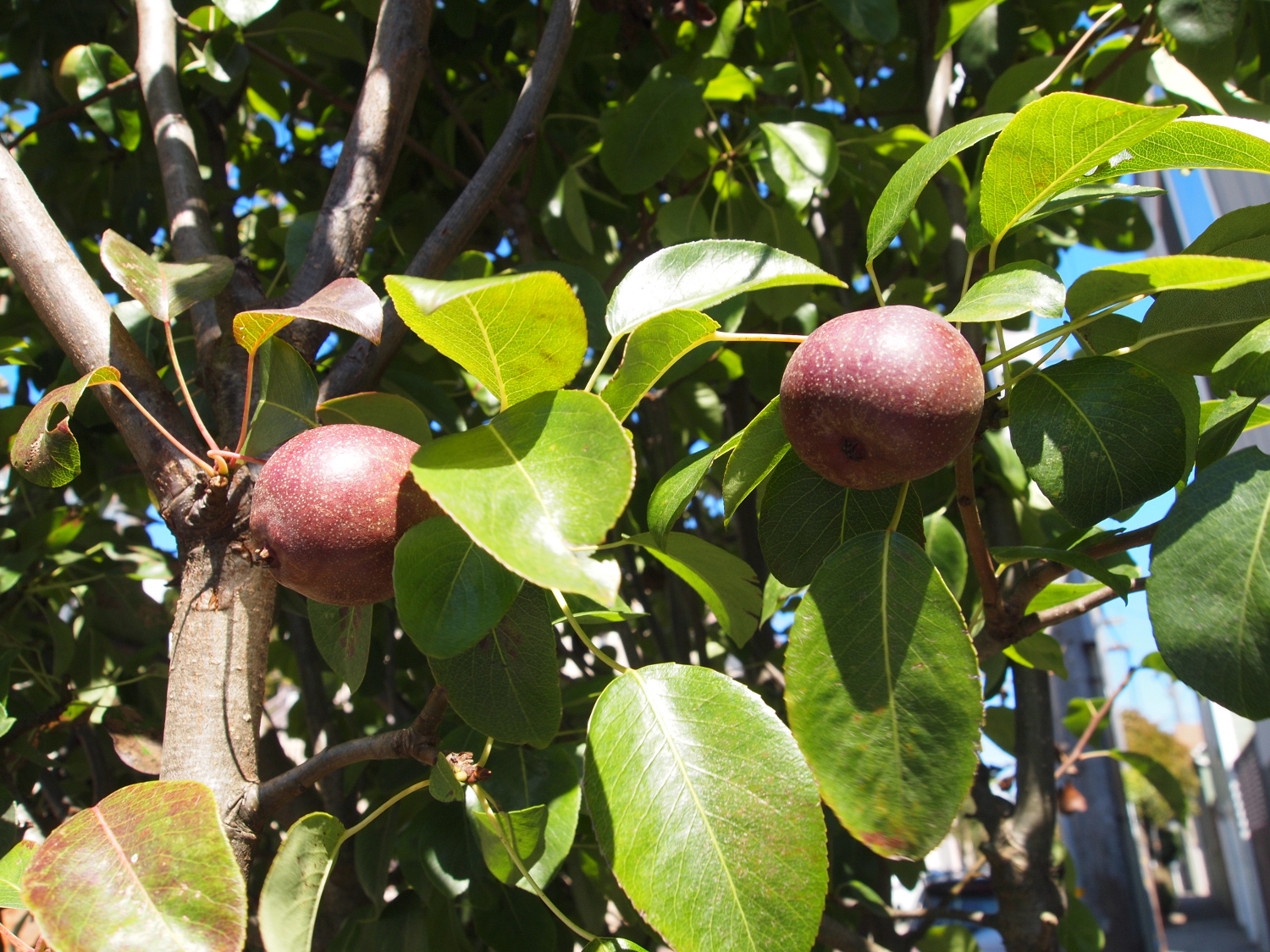 Should fruit trees be street trees?

I hear a lot of interest in planting fruit trees as street trees – and let me say here that SFE is not land owning so we don’t have jurisdiction over street trees – but I don’t think this is a good match. Some have concerns about mess, but in truth several ornamental species can produce messy fruit.  My concerns are about tree health and vitality. We want street trees to be as big as they can and to be able to grow well in a rather harsh environment, where access to water and nutrients is limited, and where delivery trucks might “prune” low branches among other human pressures.

Fruit is “expensive” for a tree to produce, meaning they need more water and nutrients to grow delicious fruit, and we want to keep fruit trees small so they’re easy to harvest, which means that they’re better in yard and open spaces than the confined street tree environment. That’s why our Urban Orchard program has only planted fruit trees in school yards, community gardens, and other open spaces.

How is the Urban Orchard program funded?

We were able to start planting trees through the San Francisco Carbon Fund because the cost to plant a fruit tree can be pretty small. That smaller investment level is what opened the door to street tree, and other tree, planting through the Carbon Fund.

How does the Carbon Fund work?

The idea for the SF Carbon Fund was hatched in 2007, when then-Mayor Gavin Newsom issued an Executive Directive proposing the creation of a carbon mitigation program to help mitigate local greenhouse gas emissions resulting from air travel by city employees.  Roughly two years later, the City began investing 13% of its employee air travel budget in the San Francisco Carbon Fund.  The legislation that created the Fund was drafted so that anyone, individuals and businesses alike, can contribute to the Fund and we have been working with external partners to increase investments from events in the city—organizations as diverse as the International Biophysical Society and Dreamforce.

Over the last 6 years, the Fund has invested in a range of urban greening projects, including the Urban Orchards Program, and a biodiesel fueling facility.  Moving forward we’re looking at investing in energy related projects, such as supporting energy efficiency work in small businesses and microgrids. 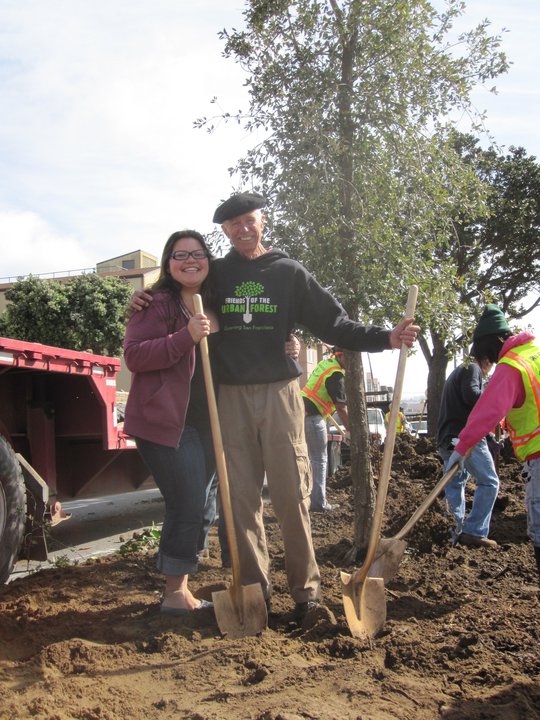 When I worked at Friends of the Urban Forest before coming to work for the City, I was frequently approached by people who wanted help planting fruit trees in their backyards. One of the key priorities that I was given when started at SFE was to connect carbon fund dollars with tree planting. After the first Urban Orchard planting at the Botanical Gardens at Strybing Arboretum, which was hugely meaningful for me as a former volunteer there. Getting to plant hundreds of fruit trees city-wide in a single day-long event in January of 2013, through a partnership with Friends of the Urban Forest, was a great day.

What’s upcoming in 2016 and beyond for Urban Forestry/Urban Ag in SF?

Achieving the initial goals of the Urban Forest Plan: Phase 1, Street Trees, so that the plan can be successfully implemented, is the most important urban forestry issue coming up this year. Care and protection of street trees is critical for a healthy and happy city, but we can’t ensure that unless resources to manage these important trees are secured.