Prior to the ASLA Annual Meeting and EXPO each year, we make an effort to highlight some of the older suspended pavement installations of which we are aware.  One such installation is located in the heart of Philly on Market Street, between 6th and 11th, roughly a 10-minute walk from this year’s conference. Designed by the Delta Group in early 1980’s, each of the honey locusts on the north and south sides of the street were planted in a series of grade beams — one being the curb on the street, and the other approximately 6’ away. A structural slab spans the beams and the notched curb provides 800ft3 (22.6 m3) of soil per tree.

Philadelphia is one the nation’s great urban centers, but is somehow less well known for its suspended pavement installations than its East Coast counterparts Boston and New York. Such is the case with this signature installation and no literature on it can be found. As an innovative and successful landscape it has been largely forgotten, not registering a blip in any papers on the subject, or in any publication from the city.  We are fortunate, however, that other suspended pavement projects are better documented.  These early suspended pavement projects serve as a fascinating precursor to the abundance of such projects being installed at present.

The Christian Science Center in Boston, well known for its reflecting pool and plaza space, is taught in many landscape architecture curricula around the nation as the epitome of the brutalist landscape. This is the oldest suspended pavement installation that we know of in the United States and was designed by IM Pei and Sasaki in the mid-1960s. The monotypic stand of linden (tilia cordata) were planted in 1968, making them 50 years old.

Another early example is the 16th Street Mall  in Denver, which we wrote about in 2014. This installation, designed by Olin Studio, is not performing as well because of the volume of soil that each honey locust (gledtisia triacanthos) has access to is much smaller. According to Charlie Hunt, Downtown Service Coordinator with the Downtown Denver Partnership, the planters amount to around 160 cubic feet (4.5 m3) of soil in each planter. While this is not an impressive amount of soil based on our current understanding of how much soil trees need to thrive and grow to maturity, it was significantly more than they would have received in a traditional tree pit.

One suspended pavement installation which is very well researched is the custom poured-in-place installation on Tryon and Trade in Charlotte NC. In 1985 Charlotte, NC, then City Arborist Don McSween conceived of this major renovation project. Each willow oak was installed approximately 700 cubic feet (20 cubic meters) of soil. As an added bonus, the tree pits connect along the length of a block with multiple trees in each pit, such that the trees benefit from shared soil volumes. As of 2013, the willow oaks (quercus phellos) had an average DBH (diameter at breast height) of 19 inches (48.3 cm) and an average height of 71 feet (21.64 meters). Measurements by Tom Smiley, 2013; MacDonagh & Smiley 2013 ISA Proceedings.

Though it is currently flying under the radar, Philadelphia’s Market Street suspended pavement system is outperforming the Denver Mall and has no incredible maintenance regimen of the Christian Science Center. The Center City District maintains trees on this installation, which connects Philadelphia’s current government to the historic capitol of the nation, and Independence Hall, Philadelphia’s most noted landmark. The suspended pavement system runs from 6th street to 11th and terminates at the SEPTA (Southeastern Pennsylvania Transportation Authority) station by City Hall.

The block between 6th and 7th, adjacent to Independence Mall, has the most intact original design and trees that are faring the best. These 24 honey locust — 12 on the north side and 12 on the south side — are averaging 18” to 24” (45-60 cm) DBH. Most of the original concrete slabs creating the tree openings have been replaced with Belgian block.  Given this minimal intervention, which allows for better maintenance, these trees provide the property owners a significantly valuable landscape complete with a beautiful, arching canopy.

The blocks from 7th to 11th have seen more change than their easterly counterparts. Where the original design remains the trees are outstanding, providing shade, carbon sequestration, property value increases, and other valuable ecological services. Unfortunately, all the trees have been removed on the north side of the block from 8-9th street to allow for the development of 801 Market Street — the Historic Strawbridge Department store. On the south side across from this development only 4 honey locusts remain.

The block from 7th-8th is truly remarkable and provides testimony as to how cities change over time, as well as to a trees’ resilience when it has a reasonable soil volume. The 6 trees on the north side are doing well, as are the 7 on the south side. All are close to 24” DBH. However, 2-3 trees have been removed for parking, and there are 4 aging above-grade planters where there should be trees.  Three trees have been replaced. In all, 18 trees from the original streetscape remain on the blocks from 9th to 11th . There are no trees close to City Hall as that area was not part of this original streetscape.

When I was in Philadelphia a few days ago, I managed to speak with Cindy Sanders of Olin Studio . Her reaction confirms the above: “There is a suspended pavement installation here? We need to shine the light on that!” I could not agree more.  This installation has held up over time and the trees are thriving despite the changing city that surrounds them.

To learn more about this installation, stop by our booth at the ASLA show in Philly! 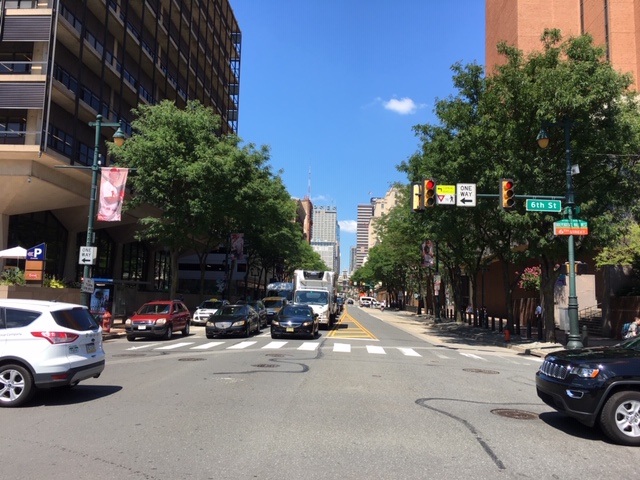 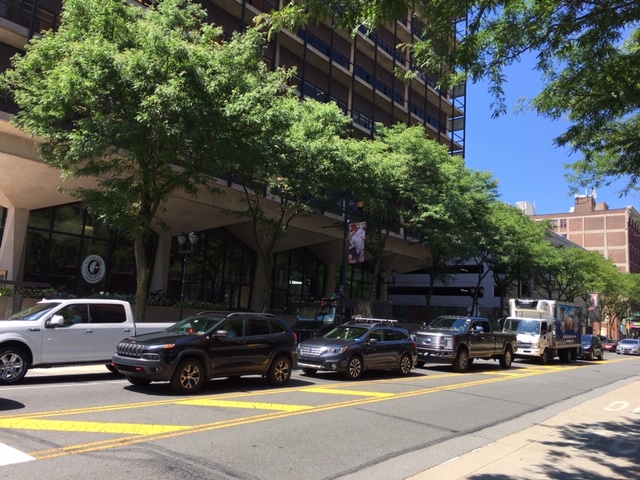 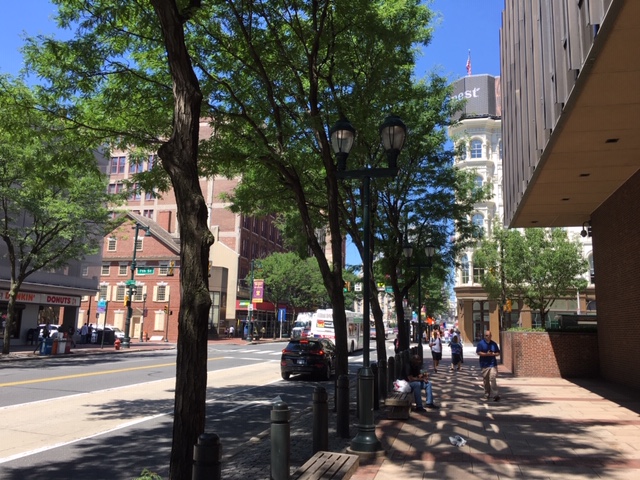 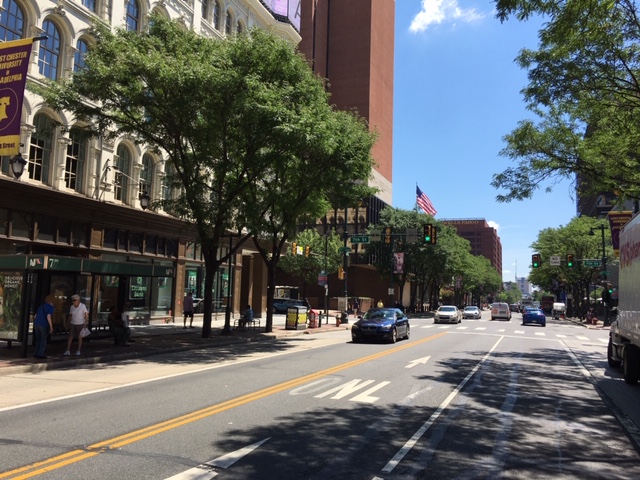 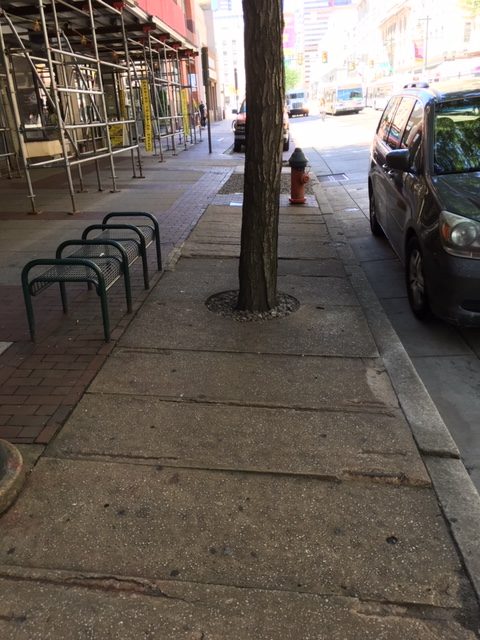 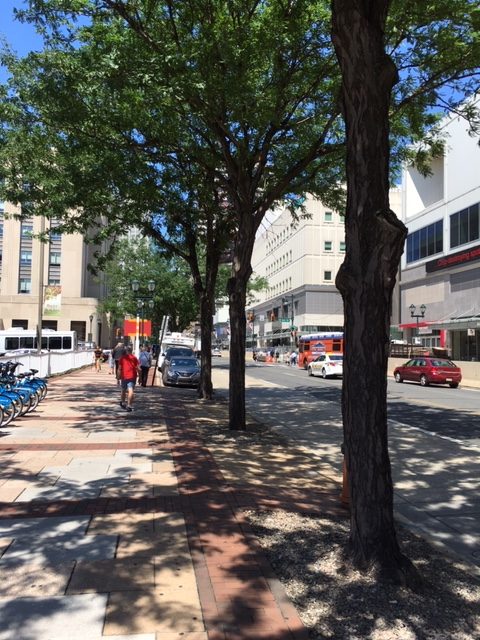