There are many significant benefits to an MS4 (Municipal Separate Storm Sewer System) approach to managing urban stormwater. Many newer cities are fortunate to have such a system in place, but a great many don’t. Instead, they have a combined sewer system (CSS) where the same set of pipes handles both stormwater runoff and waste water, which can lead to costly and ecologically disastrous (and avoidable) polluting of receiving waterbodies.

There could hardly be anything in a city that is less glamorous and seemingly unrelated to trees and greenery then sanitary sewer systems, but they have an important relationship. With strategic planning, trees and soil can be a significant tool for reducing the combined sewer overflow (CSO) problems experienced by many cities. I want to look at this idea in the context of one city in particular: New York.

A combined sewer system has only one set of pipes for almost all types of “used” water in the city. This means that all the dirty water from toilets, sinks, and showers are mixed in with stormwater runoff from streets, parking lots, gardens, and parks. Sometimes, all the water in a combined sewer system will reach its final stop – the waste water treatment plant – where it is treated, cleaned, and safely released back into the nearby surface water bodies (rivers, harbors, etc.). This is the best case scenario.

Unfortunately, because of the relatively small capacity of the pipes, in a place like New York City this generally happens only when there’s almost no rain. For New York, which experiences Type 3 rain events and gets an average of 49.9” (1267mm) of rain per year, CSO events are common. The same is true for cities like London (Type 1A: 23.3”/592mm per year) and Philadelphia (Type 3: 41.5”/1053mm per year). The significant and growing population of cities with CSSs further complicates things.  With millions of residents and acres and acres of impervious surfaces that water runs off every time it rains, how do you tackle a problem this significant in a city as big as New York?

There are two general approaches that I call silver bullet and silver buckshot.

These large pipes are usually 20 to 30 feet wide and run for miles. Chicago, for example, commandeered a number of huge open pit quarries around the city to store the storm sewer and sanitary sewer mix after large rainstorms; it also may entail enlarging the capacity of the wastewater treatment plants (something that is happening in London). This approach accepts increasing stormwater volumes entering the CSS system as a given and does not attempt to reduce them. This is an expensive method, because the stormwater collection system is permanently on emergency alert. Until the Great Recession began in 2007, this single purpose gray approach was the default solution for most large U.S. cities.

The “silver buckshot” approach is one of dispersed control. This newer approach creates a hybrid gray and green infrastructure system which focuses on optimization, repairing pipes, and reducing water volume and pollution with greening.

It calls for maintaining and/or repairing the existing underground pipe system (gray), enlarging it modestly or not at all. Increasing available soil for street trees and incorporating other green infrastructure solutions that use soils and plants to provide volume reduction act as a second, non-emergency green system. This approach optimizes all parts of the existing gray CSS system while also increasing the level of stormwater dispersal. This is the direction New York City has been going, and by focusing on their hot spots they could make a significant impact as efficiently as possible.

Focusing on the hot spots

Most combined systems have “hot spots,” inlets that contribute disproportionally to the number of CSO discharges that occur. New York City found 460 pipes that are combined sewer overflow (CSO) outlets, a smaller subset of which it identified as “hot spots” (Tier 3) inlets and excess-capacity pipes. In the past, before fines were implemented, overflow sites were simply ignored, but according to the New York State Department of Environmental Conservation, the number of CSO outfalls has decreased from 1300 to 937 since 1993 due to CSO abatements.

Despite this progress, according to Riverkeeper.org, CSO events still occur about once a week (more frequently at some of the hotspots), depositing an average of 500 million gallons of polluted discharge across the city every week. 15 of the total CSO outfalls across the city are responsible for a staggering 50 percent of the total volume of discharge annually. “In other words,” says Swimmable NYC, “13.5 billion gallons of CSO pollution were released from the red dot locations on the map below.” 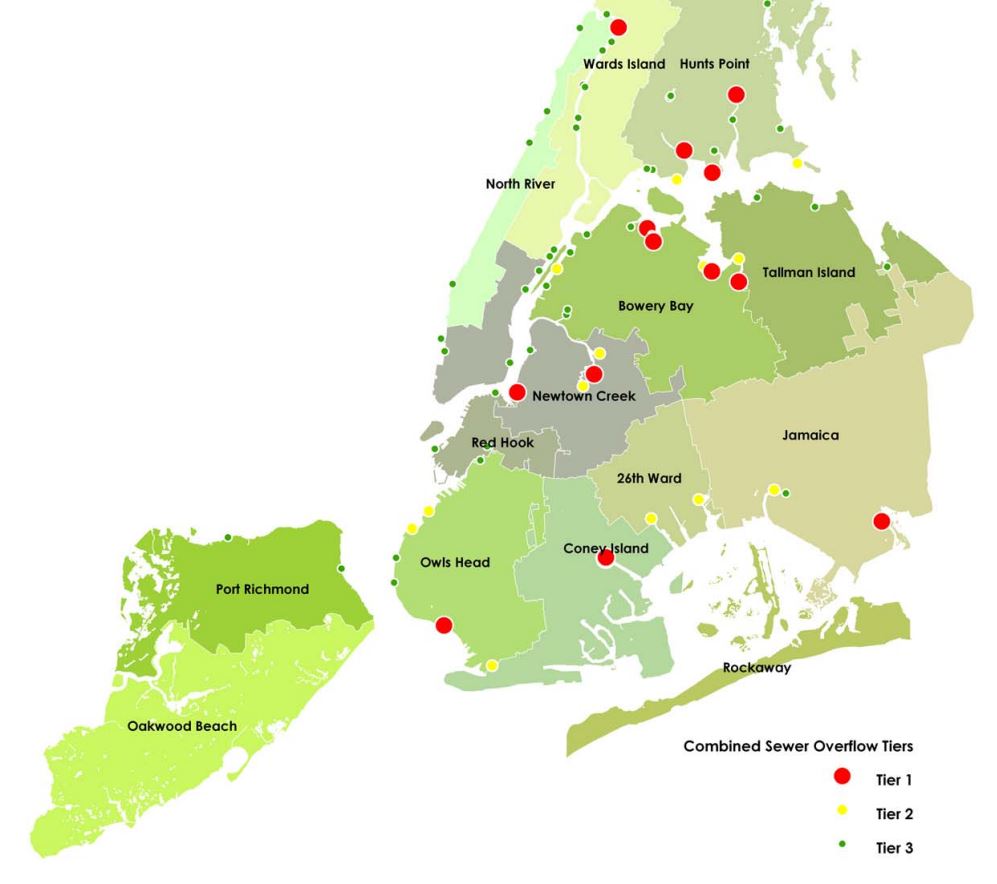 Strategically investing in trees and soils in these critical catchment areas could be hugely effective for reducing the amount of water that enters the pipes following small rainfall events of 2” (5 cm) or less. Trees planted in large soil volumes would dramatically reduce peak loads by providing immediate water storage. This would have the effect of lowering the volume of water entering the pipes at time of concentration and lengthening the hydrograph time span at these critical points during the rain event. Over time, as the trees grew, they would be able to provide more and more benefit, intercepting rain before it even hits the ground and evapotranspiring water before it can enter the pipe system.

This incremental improvement approach focuses on conserving the city’s existing infrastructure (pipes and waste water treatment plants) and adding water storage capacity and elasticity to the system with small, lower cost, dispersed green infrastructure at or near the source. This approach optimizes the complementary strengths of both solutions.

New York has already made green infrastructure a part of their approach. They’ve put a lot of effort into their urban canopy and building out their green infrastructure, planting a million trees planted in 8½ years (completed October 2015) and building more than 2,000 rain gardens (many with trees). The city currently has 24% urban tree canopy cover (UTCC); we’ll be able to see the impact of these efforts in the coming years and decades.

In addition to being smart from a planning perspective, there are financial arguments to this approach. While we don’t think of the all gray infrastructure approach as risky, sticking to one solution is a crap shoot. Cities that have no green infrastructure are, to use a gambling term, “all-in” – they’ve placed huge bets on giant pipes.

Before the Clean Water Act, New York (and many other cities) had combined sewer overflows hitting their rivers once a week for over a hundred years, without any financial repercussions. Today’s post focused on New York because of their great blended approach to managing and mitigating combined sewer overflows, but many cities are facing the same problems – in 2002 the EPA called CSOs “largest category of our nation’s wastewater infrastructure that still need to be addressed.” The population of all cities and their suburbs have doubled, tripled or quadrupled in population, but their combined sewer systems, their waste water treatment plants, and their urban tree canopy cover have not. We need a new approach to managing this acute issue. I believe targeted CSO hot spots with strategic green infrastructure projects to be a critically important one.

On March 8, 2012, the New York State Department of Environmental Conservation and the Department of Environmental Protection signed an agreement to reduce CSOs using the hybrid approach discussed here. As part of the agreement, the Department of Environmental Protection committed to developed long-term control plans, or “comprehensive evaluations of long term solutions, to reduce CSOs and improve water quality in NYC’s waterbodies and waterways. The goal of each long-term control plan is to identify appropriate CSO controls necessary to achieve waterbody-specific water quality standards, consistent with the Federal CSO Policy and the water quality goals of the Clean Water Act to achieve Fishable/Swimmable waters wherever feasible.” I’m very excited to see the results of these efforts.