A Case Study in Using i-Tree on a Regional Scale

So you want to understand your urban forest better. Maybe it’s that you want to make the business case for its value, or understand where your tree canopy is strong and where it could still use work to help guide policy or budget decisions.

In part 1 of this series, I gave a cursory overview of the different i-Tree tools and what they can do. Today, I’ll make those tools personal by examining a study done with i-Tree: Urban Trees and Forests of the Chicago Region, (Nowak et al 2013). This is not a study I was personally involved in, rather I am using it as an example of a very recently-published, large-scale study that demonstrates what the i-Tree tools are capable of and how they can help you better understand your urban forest and make smarter, better, informed decision about its care and its future.

The “Urban Trees and Forests of the Chicago Region” study was done by the Morton Arboretum in collaboration with the U.S. Forest Service. The main goal of the Chicago Region Urban Forest i-Tree study was to determine the vegetation structure, functions, and values of the trees in the Chicago Region to better inform forest management. The Chicago Region is defined as the City of Chicago and the seven counties surrounding it: Cook, DuPage, Kane, Kendall, Lake, McHenry, and Will. To accomplish the project goals, 2076 one-tenth acre plots were sampled during the summer of 2010 and analyzed using i-Tree eco. The study included “boulevard trees, trees planted in parks, and trees that naturally occur in public rights-of-way, as well as trees planted on private or commercial properties.” They defined trees as “woody plants with a diameter greater than or equal to 1 inch at breast height (d.b.h.).” As a result, some species that are commonly considered shrubs were considered trees in this study if their d.b.h. was equal to or greater than 1 inch.

Table 1 summarizes their findings at a glance. 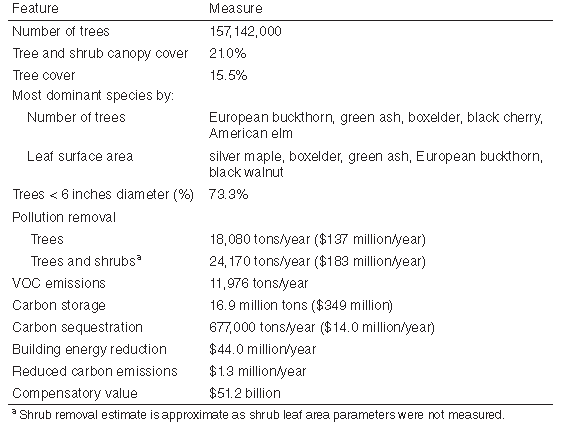 We can see from this table that the trees in this area provide significant benefits: for example, this urban forest provides an estimated $349 million of value just in carbon storage benefits! The estimated compensatory value of this forest is $51.2 billion.

However, from this table, as well as more detailed information in this report, it is also evident that significant changes in the structure and composition of this forest are still needed to maximize benefits of this urban forest, including:

I’ll walk through each of these conclusions in more detail.

According to Dwyer and Nowak (2000), tree canopy cover in urban and metropolitan areas across the U.S. averages 27% and 33% respectively. Tree cover in the Chicago Region, in comparison was only 15.5% (21% tree and shrub canopy cover), almost half the national average. More trees would clearly be the first step in increasing the benefits provided by the urban forest. Compared to national averages, Chicago could make major improvements in this area.

Not only is canopy cover relatively low in the Chicago region, 38.4% of the canopy cover consists of invasive species. European buckthorn is by far the most common species, comprising 28.2% of this forest. The next most common species are Green Ash and Box Elder, each at 5.5% of the regional forest. While ash trees have the greatest leaf area of all species in this region, and ash is the second most common tree in this region (after buckthorn), most ash trees are expected to be lost to Emerald Ash Borer (EAB) in the near future.

And ash is not the only common tree vulnerable to deadly insect or disease in this forest. This study determined that the following five insects or diseases pose a threat to the Chicago Regional Forest because they currently exist or have existed on the Chicago region:  Asian longhorned beetle (ALB), gypsy moth (GM), emerald ash borer (EAB), oak wilt (OW), and Dutch elm disease (DED). Of these, ALB is the only one that has been eradicated in this region. Because 7 out of 10 of the most common species in this forest are vulnerable to one of these five diseases, this forest is very vulnerable. Moreover, two out of the only three of the 10 most common species that are NOT vulnerable to catastrophic insect and disease outbreaks are invasive species: European buckthorn and amur honeysuckle.

Clearly, more species diversity, reduction in invasive species cover, and less emphasis on species vulnerable to insect and disease are greatly needed in this regional forest.

While 73% of the trees in the Chicago region have diameters less than 6 inches, they provide only 21.6% of the total leaf area. Only 4.8% of the tree population had a d.b.h. greater than 18”, but these trees provided 32.7% of the total leaf area. Figure 1 demonstrates how that average carbon storage and sequestration benefits increase dramatically as trees increase in size. In other words, Chicago needs not only more trees, they need bigger and more mature trees! 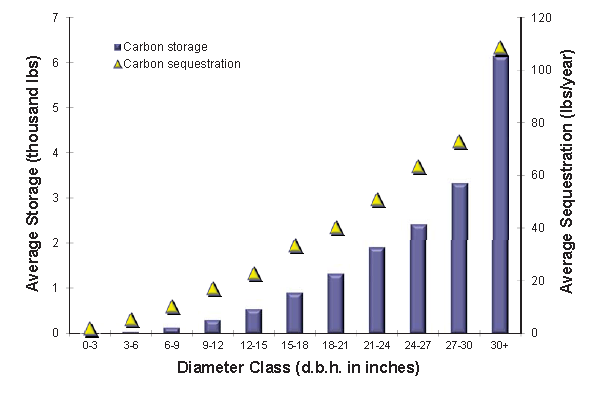 Several of the most common large diameter tree species had very few small diameter trees. Bur oak and white oak, for example, had a much greater proportion of large trees than small trees, indicating that without active management, there are not enough small oaks to sustain the population of large oak trees over time.

This report illustrates the importance of analyzing the urban forest’s current condition to inform future planning and management decisions on a regional scale. In its conclusion, the authors write: “To sustain and enhance the forest and the benefits it contributes amidst these major challenges, a comprehensive and integrated management strategy must be developed and implemented across the region. The “Tree Census” and analysis summarized here are the platform on which to build the strategy—taking action for the benefit of the entire Chicago region and beyond.”

If you are interested in learning more about this study, or in seeing more examples of what others have done with i-Tree, you can find a report on this study and reports of many more i-Tree studies on their website.

Part 3: A case study in using i-Tree at a City Scale