In part 2 of this series, I gave an example of an i-tree study that analyzed the Chicago Region and encompassed seven counties.  But i-Tree tools work on a much more granular level as well, so today I want to discuss about a study that looks at just one city: my hometown of Minneapolis, MN. Not only does this study include a much smaller geographical area, it is also more focused within its study area. Whereas the Chicago Region study analyzed all trees within its study area, the Minneapolis study only analyzed actively managed street trees (McPherson et al 2005).

The primary goal of the Minneapolis study was to assess “whether the accrued benefits from Minneapolis’s street trees justify the annual expenditures” – in other words, are their street trees worth what they cost? The authors of the study acknowledge that the City of Minneapolis “maintains trees as an integral component of the city infrastructure…The urban forest makes Minneapolis a more enjoyable place to live, work and play, while mitigating the city’s environmental impact,” but this is a mental calculation familiar to anyone running a business (or a city). If funds are low and costs are rising, every expenditure is scrutinized. In the case of Minneapolis, the planting and maintenance of street trees, while described as economically efficient, was still classified as “non-essential.” Enter i-Tree.

By providing a detailed cost-benefit analysis using i-Tree, the authors show that Minneapolis’ actively managed street trees do indeed provide a good return on investment, providing $1.59 in benefits for every $1 spent. Read on to see how they did it.

The Minneapolis study was a pilot STRATUM project and one of the first of its kind ever completed (Stratum is the precursor for i-Tree Streets). Like the Chicago study, it analyzed the structure and benefits of the Minneapolis urban forest – that is, just the actively managed street trees – but it takes the study several steps further, analyzing total costs and cost-benefit analysis as well as management implications, including very specific management recommendations. 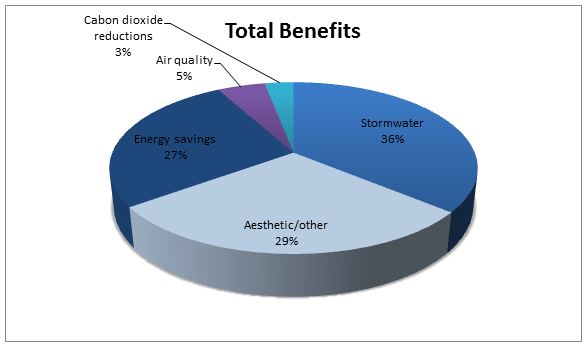 Based on an inventory of a sample of Minneapolis’ street trees conducted by trained volunteers, this study estimates that there are approximately 198,633 (standard error (SE) 14,088) street trees in Minneapolis. The sample inventory of 4,574 trees included 60 different species, which compares favorably to the mean of 53 species reported by McPherson and Rowntree (1989) in their nationwide survey of street tree populations in 22 U.S. cities. However, the five most common species (which account for a total of 50% of the population) are very vulnerable to catastrophic losses to pests or disease:

Lack of species diversity is a serious problem on its own, and the age structure of Minneapolis’ street trees reveals how long the impacts of catastrophic pests and disease can last when that is the case. The effects of Dutch Elm disease, which first struck the city 20-50 years ago, are still evident:

“The age structure … for street trees in Minneapolis differs from the ideal in that there are more maturing trees in the 6–18 inch DBH classes, and fewer mature and old trees. We interpret this pattern to mean that a high percentage of trees were planted 20–50 years ago, perhaps to replace trees killed by Dutch elm disease. The relatively small number of trees in the mature (18–24 inch DBH) and old tree categories (>24 inch) suggests that relatively few trees survived this era of transition. The lack of functionally mature trees is serious because mature trees tend to produce the highest level of benefits by virtue of their size.”

The study also evaluated tree condition as an indicator of both how well trees are managed and how well they perform under typical growing conditions on Minneapolis streets. This analysis is valuable both to guide management decisions and for future species selection, as “species with larger percentages of trees in good or better condition are likely to provide greater benefits at lower cost than species with more trees in fair or poor condition” (McPherson et al, 2005).

McPherson et al (2005) estimate energy savings, CO2 reduction, air quality, stormwater, and aesthetic benefits of Minneapolis’ street trees to be $24,933,434 per year, or $125 per tree.  They acknowledge that “this is not a full accounting because some benefits are intangible of difficult to quantify (e.g impacts on psychological health, crime, and violence).” In other words, not all benefits provided by trees are captured in the estimated $24,933,434!

I-Tree allows you to break down benefits by category, and stormwater benefits account for the greatest proportion of the total estimated benefits of Minneapolis’ street: 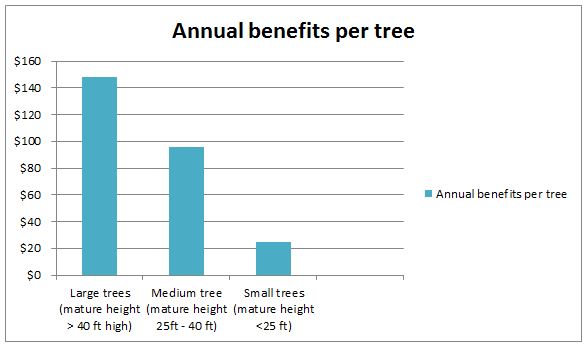 The study also gives a detailed account of how much each of the top 14 species contribute to each benefit, showing which species are best for each of the estimated benefits. For example, American Elms are very effective for stormwater runoff reduction, providing 41% of the total stormwater benefits provided by Minneapolis’ street trees, even though they only comprise 9.9% of the total number of trees. These are important factors for designers to understand when considering how trees can contribute to high performance landscapes.

Costs were based on total expenditures during 2004 including pruning, planting, irrigation, removal and disposal, inspection, administration, litter and storm cleanup, legal costs, and infrastructure repairs associated with trees (e.g. heaved sidewalks, cracked curbs, damaged driveways). Due to a resurgence of Dutch Elm Disease, Minneapolis had to shift funds from pruning to tree removal, so pruning costs were only 58% of the amount spent in 2002, and tree removal costs were higher in 2004 than in 2002. Total cost breakdown for 2004 was estimated as follows: 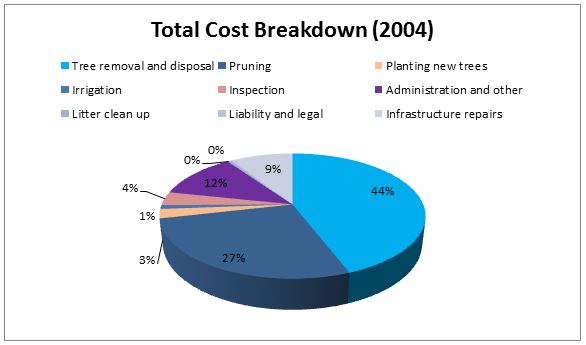 The total cost was $9.2 million, or $46 per tree – significantly less than the total benefits provided per tree.

With total benefits estimated at $24,933,434, and total costs estimated at $9,209,041, net benefits are estimated at $15,724,393. Put in more comprehensible terms, Minneapolis’ street trees provide $1.59 for every $1 spent: a very good return compared to most investments, especially in urban infrastructure.

The authors use the above analysis to provide very specific management recommendations to achieve what they term “urban forest sustainability.” Their definition of a sustainable urban forest includes not only species and age diversity, well adapted healthy trees, and appropriate tree numbers, but also cost efficient management.

Their recommendations for increasing species and age diversity include detailed guidance on species selection for new trees that are tailored specifically for the City of Minneapolis based on current performance of the city’s street trees. Maintenance recommendations that are tailored specifically for Minneapolis’ street trees based on this study’s analysis of structure, costs and benefits, are also included.

Almost ten years after this study was completed, budgets are tighter than ever. This means that it’s also more important than ever to have data to show that investments into urban street trees pay us back. Emerald Ash Borer, which arrived in Minneapolis in 2010, is no longer a threat but a reality. McPherson et al (2005) found more green ash trees than any other species in Minneapolis’ street tree population. Although there were 60 species in the sample inventory, several species, including ash trees, exceeded the recommended maximum of 10% of a single species.  The authors noted that “A catastrophic loss of one or more of these dominant species would leave large structural and functional gaps in Minneapolis’s neighborhoods.” Thanks in part to this study, the City has taken action and developed a scheduled ash replacement plan to pro-actively begin replacing Ash trees with a diverse mix of species before Emerald Ash borer hits Minneapolis full force. This is just one way a study like this can be put to good use, and there are dozens more.

Part 2: A case study in using i-Tree at a Regional Scale