Trees have myriad positive effects on urban areas. And finally, forward-thinking cities are beginning to see trees as an important investment and understand that well cared for trees are not only an asset to the community, but can also save cities money.

Many people already know that trees cool cities and reduce the heat island effect, improve air quality and add oxygen into the air, and provide habitat for small mammals, birds, bees, and other insects.

However, there are many less-known benefits to urban trees.

Many people inherently understand that fresh air, beautiful views, and the sweet smell of flowers and plants are good for us. However a much cited study, published in 1984 in the journal Science by environmental psychologist Roger Ulrich, was the first to use the standards of modern medical research—experimental controls and quantified health outcomes—to show that gazing at a garden can speed healing from surgery, infections, and other maladies.

Ulrich and his research team studied the medical records of people recovering from gallbladder surgery at a hospital in Pennsylvania. All other things being equal, patients with bedside windows looking out on leafy trees healed, on average, a day faster, needed significantly less pain medication and had fewer postsurgical complications than patients who instead saw a brick wall.

According to various studies of healthy people that measured physiological changes in blood pressure, muscle tension, or heart and brain electrical activity, just three to five minutes looking at views dominated by trees, flowers, or water can begin to reduce anger, anxiety, and pain and induces relaxation.  Clare Cooper Marcus, an emeritus professor in landscape architecture at the University of California, Berkeley says of the effect, “Let’s be clear. Spending time interacting with nature in a well-designed garden won’t cure your cancer or heal a badly burned leg. But there is good evidence it can reduce your levels of pain and stress—and, by doing that, boost your immune system in ways that allow your own body and other treatments to help you heal.”

Beautiful scenery has both physical and mental effects on people, and as discussed above, it can reduce stress and negative feelings. This benefit has been observed to reduce crime and violence in certain areas.  In a study done at Chicago’s Robert Taylor Homes, the largest public housing development in the world, there were dramatically fewer occurrences of crime against both people and property in apartment buildings surrounded by trees and greenery than in nearby identical apartments that were surrounded by barren land. What’s more, compared with buildings that had little or no vegetation, buildings with high levels of greenery had 48 percent fewer property crimes and 56 percent fewer violent crimes. Even areas with just a moderate amount of greenery were associated with lower crime rates. A wonderful effect to be sure, but what is going on here?

Plants and green space lower crime in several ways. First, greenery helps people to relax and renew, which reduces aggression. Second, green spaces bring people together outdoors, increasing surveillance and discouraging criminals. The green and well-maintained appearance of an apartment building is also a cue to criminals that owners and residents care about a property and watch over it and each other.

The study also found that residents of Robert Taylor Homes who live near trees experience significantly less domestic violence than people who live in places without trees. Of the 200 residents interviewed, 14 percent of those in non-green areas said that they had hit their children in the past year, compared to only three percent of residents living in areas with trees. 22 percent of women from non-green areas said they had engaged in violence in the last year, compared to 13 percent of those living in improved, planted areas. 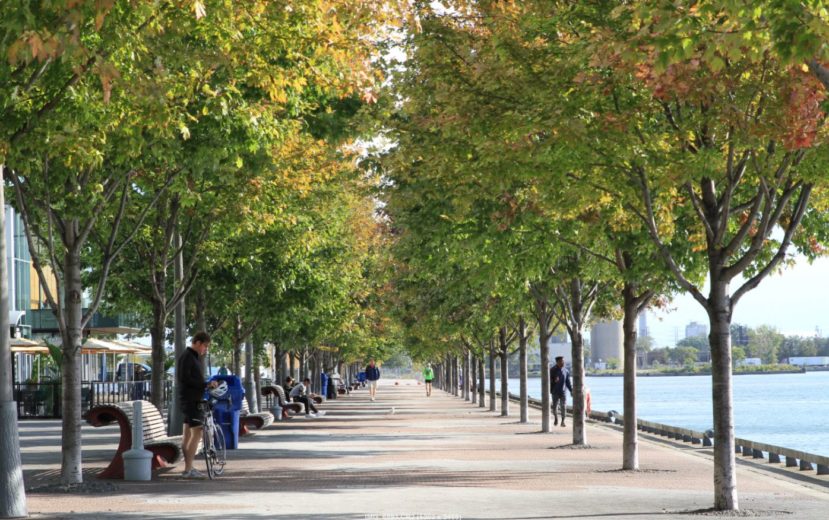 In addition to improving the appearance of an area, trees can also boost retail sales and add value to homes and other properties. It is found that commercial retail areas are more attractive to shoppers when filled with trees and other greenery. Studies have shown that businesses in areas with trees project a warm, welcoming, and inviting atmosphere for shoppers, and those shoppers then tend to linger and spend more time shopping, resulting in some cases in a business increase of up to 11%.  Another consideration is that a tree-lined street will often slow traffic enough to allow the drivers to look at the store fronts instead of zipping by. Trees can also stimulate economic development by attracting new business and tourism to an area.

In regard to real estate, apartments rent more quickly, tenants stay longer, and space in a wooded setting is more valuable to sell or rent. In fact, the USDA Forest Service reports that healthy, mature trees add an average of 10 percent to the value of a property.

In the same study done at Robert Taylor Homes, it was found that when compared to people who live in places without trees, residents of the development living near trees have significantly better relations with, and stronger ties to, their neighbors. They also reported having more visitors, socializing more with their neighbors, knowing more people in their apartment building.  This lead to a stronger sense of community than those who living in places without trees, and residents said they felt safer.

The research team made 100 observations of outdoor common spaces in two public housing developments. They found that adults, children, and adults supervising children gathered significantly more in common spaces that contained trees than in spaces that had no trees.

Additionally, women living in apartment buildings with trees and greenery immediately outside also reported greater effectiveness and less procrastination in dealing with their major life issues than those living in barren, but otherwise identical, buildings. In addition, the women in greener surroundings found their problems to be less difficult and of shorter duration. The study concluded that trees help may poor, inner-city residents cope better with the demands of living in poverty, feel more hopeful about the future, and manage their most important problems more effectively.

Trees are a worthwhile investment that everyone can benefit from, and an asset to any community. With so many benefits to urban trees and forests, we cities need to get planting!

Nicole Petersen is a sustainable landscape architect with The Kestrel Design Group.