In 1982, I was in China studying landscape architecture and architecture at the University of Nanjing. The central Chinese government had recently announced they would recommit to a nationwide multi-billion tree planting program, originally initiated in 1978. By then the Cultural Revolution was over, Mao Zedong was dead, the Gang of 4 had been jailed, and Deng Xiaoping had thrown the doors open to Western Capitalism. Still, the idea of the “5 year plan” was very much alive.

While in Nanjing city (Jiangsu Province, east central China) I witnessed a portion of that major tree planting plan in action in an urban area. It was an eye-opening experience, something like a mobile assembly line, a kind of time and motion dance in action.

First, small groups of men set upon, broke up, and removed 1m x 1m (4′ x 4′) concrete squares of sidewalk by hand. Then, an open bed truck with several more workers shoveled the broken concrete onto the truck, and dug a small tree hole about 61cm (2’) wide and deep.

Next came a flatbed truck with the trees, each like a giant upside-down lollipop.  These trees had trunks approximately 30cm (12”) in diameter and about 2.4m (8’) tall. The lollipop portion was a root ball about 2’ (60cm) in diameter with a few large, exposed, and pruned back roots with no visible soil. Most surprisingly, there were no branches on any of the trees. The lollipop trees, every one of them a London Plane (Platanus x acerifolia), were each dropped into a hole and then filled with dirst by another group of workers. The last step in the process was a water truck with a 15cm (6”) diameter hose; one driver and one hose operator doused each tree for about 10 to 15 seconds.

While impressive in scope and drama, what were the actual results?

Unfortunately there are no studies I know of that describe the success rate of the radical urban tree planting approach that I witnessed in Nanjing, but generalized studies of Chinese tree planting initiatives at these large scales in the 1980’s listed typical success rates of between 45% to 55% (Chokkalingam et al 2006). I have no reason to believe that these London Plane urban tree plantings were much different, though I always wanted to know.

Beginning in the mid-2000s, various large city mayors (primarily in North America, with some in Europe and Asia) started making announcements of large tree planting initiatives that their cities would undertake in rapid time spans: New York City (1 million trees within a decade of starting), Los Angeles (this started as a “plant 1 million” campaign and has since changed its name and its mission), and London (2 million trees by 2025) to name just a few. 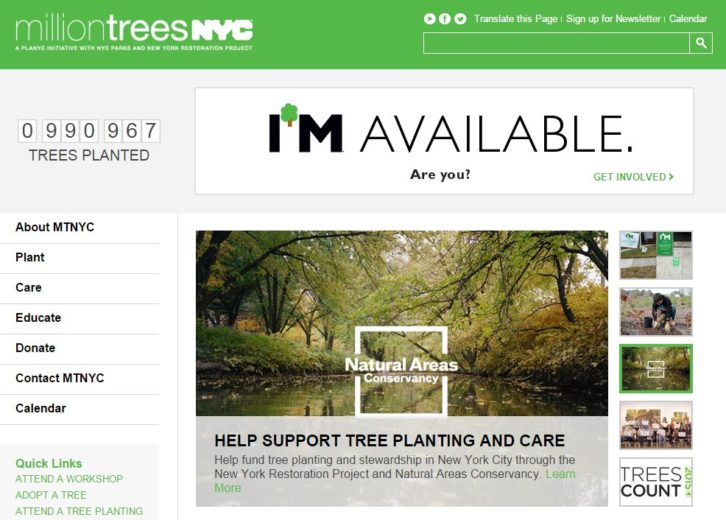 I believe New York City will reach their goal – according to their website, they are quite close – but this is not the case for any other city as far as I am aware (New York City did something worth noting: they developed a contract growing agreement with nurseries in order to control the quality of the stock they were planting). In my opinion, most other planting programs were designed to establish a city’s “green” bona fides without spending much money or exerting much effort. In large measure these announcements were aspirational, because there is no evidence that a large-scale concerted effort is underway in planting anything even close to those numbers of trees in those cities.

Using i-Tree, we modeled the net benefits and losses to a city from planting a street tree in the two scenarios described above over a 50 year time span. I-Tree is a prodigiously researched and rigorously modeled tree costs/benefits program; it has supplanted all other previous tree modeling programs and is the worldwide standard. The primary cost/benefit categories are installation and removal, operations and maintenance, carbon sequestration, heating and cooling energy savings, air-quality, and stormwater treatment. We also added property value and stormwater utility fee savings (based on rates for Minneapolis, MN).

We found that the true costs of planting trees properly or improperly were even more dramatic than we expected – with drastic implications over the decades of a tree’s potential lifespan.

In contrast, here’s how to plant a tree properly in 10 steps.

Getting to a billion (in returns)

This is the part where I apply the math that’s taken us thus far to a much grander scale in order to demonstrate that fewer trees, properly planted, can become significant city assets.

Even if a city decides to plant only 50,000 trees properly, rather than 1 million, i-Tree tells us that the net yield will still be $1.2714 billion in benefits. In contrast, our current approach of improperly planting 1 million street trees over a 50 year period will cost $3.094 billion. The math is simple.

Planting 1 million trees is great. I’m all for it. But before we jump to the number of trees, we need to step back and think about what it takes to grow the kind of tree that will pay this investment off.