What Is Suspended Pavement?

This post has been updated! Please read the latest article on suspended pavement here.

We use the term “suspended pavement” a lot on this blog and in our presentations, but it occurred to me recently that we’ve never properly defined this term. Here is my attempt to do that by walking through suspended pavement’s history, uses, composition, and case studies.

Suspended pavement is a general term for any technology that supports the weight of paving, thereby creating a void space underneath. The void space is then filled with soil – either the soil that was excavated from that site or a specified mix – and the system is paved over as it would be normally. In this respect, suspended pavements are essentially soil-delivery systems, allowing lightly compacted, high-quality soils to be made available for tree roots in cities and other heavily paved environments. In addition to aiding urban tree growth, the soil is also used for on-site stormwater management, maintaining pre-development hydrology, minimizing non-point source pollution and flooding, and recharging watersheds.

The first use of the term “suspended pavement” that we are aware of is from a study published in Arboriculture & Urban Forestry in July 2006 by E. Thomas Smiley, Lisa Calfee, Bruce R. Fraedrich, and Emma J. Smiley titled“Comparison of Structural and Noncompacted Soils for Trees Surrounded by Pavement.” In that study, the authors set up a plot of trees – a mix of Snowgoose cherry (Prunus serrulata) and Bosque lacebark elm (Ulmus parvifolia) – growing in 5.4m3 (189 ft3) of five different soil treatments: compacted soil, gravel/soil mixture, Stalite, Stalite/soil mixture, and suspended pavement. 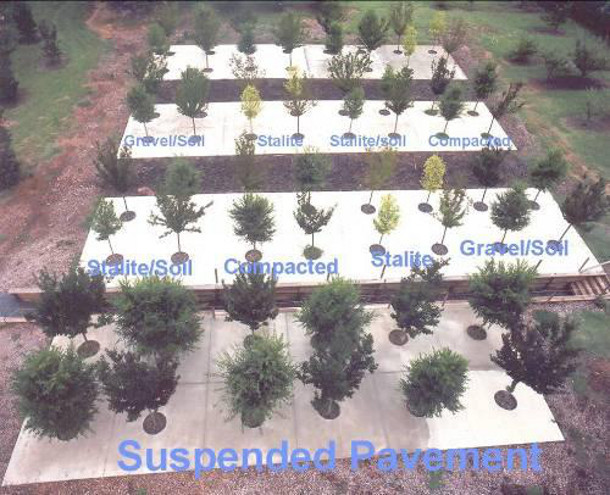 The Bartlett growing media study at 14 months. Note the size of the trees growing in suspended pavement relative to other treatment types.

This study is discussed in more detail in the “Where Is It Being Used?” section further down. You can also view photos of the study over the last eight years here.

HOW IS SUSPENDED PAVEMENT USED?

Trees keep us safe, clean our air and water, calm people and traffic, and make our environment more livable in a number of ways. They are an essential part of healthy cities, yet we largely plant them in conditions that make it extremely difficult to survive. Access to usable soil is the most limiting factor for urban tree growth, but few street trees have access to soil beyond what is provided in their opening. 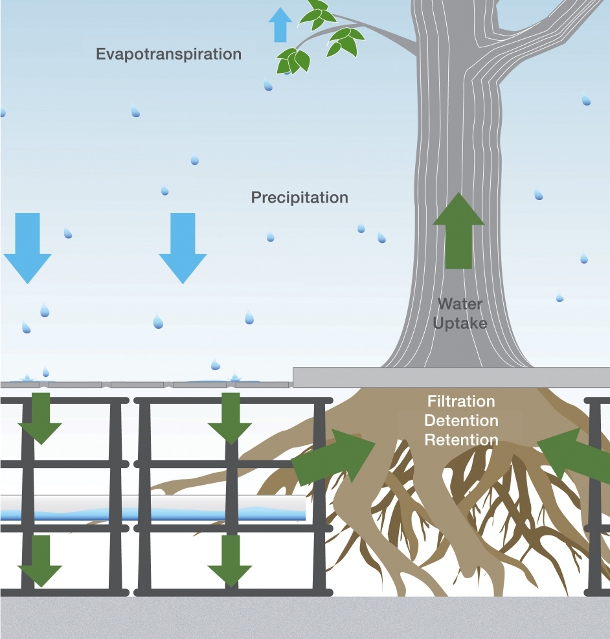 Rain water can be directed in to suspended pavement systems in order to keep it on-site. There are many ways for doing this, including pervious paves, curb cuts, catch basins, slot drains, and more.

WHAT IS SUSPENDED PAVEMENT MADE OF?

The Silva Cell, on the other hand, is an example of a modular system. The 24” wide x 48” long x 16” high frame can be stacked to meet the depth of any excavation area and spread laterally as wide as necessary. Utilities can be easily accommodated using a number of tested methods. The Silva Cell is made of a lightweight polypropylene blend, with a galvanized steel tube in the deck for additional strength. Like the earliest concrete suspended pavements, the open framework for the Silva Cell allows almost all of the space to be available for rooting, but is much less expensive than a custom system. Stacks of Silva Cells are attached vertically, but not horizontally, making future excavation, repairs easy to isolate and maintenance simple.

Silva Cells can be stacked one, two, or three frames deep

WHERE IS SUSPENDED PAVEMENT BEING USED?

This independent study (also discussed above) was set up by Dr. Tom Smiley at the Bartlett Tree Laboratory to test how well trees fare in different growing media. The trees are monitored and tracked from year to year to measure their leaf extensions, height, diameter at breast height (DBH), and more. 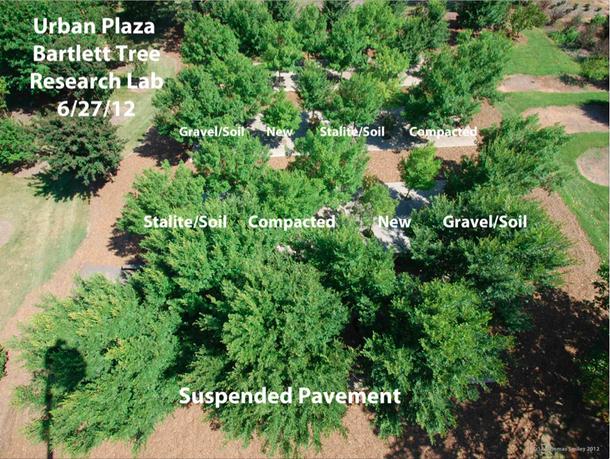 The Bartlett growing media in 2012, after eight growing seasons. 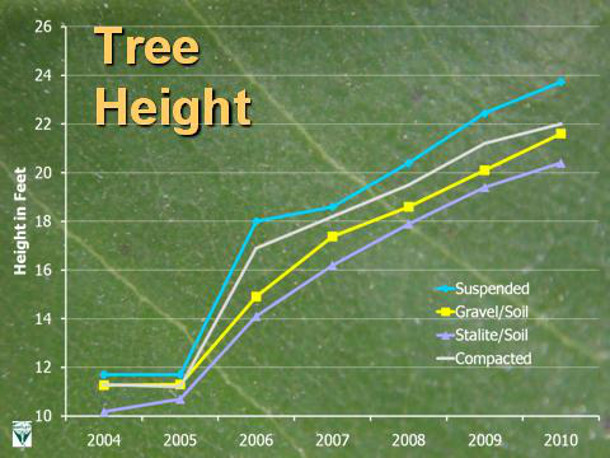 Trees growing in suspended pavement outperform those in other growing media in height.

By all measurements, the trees in the suspended pavement treatment are outperforming all the others in size, color, and root growth. This study is now entering its ninth year, and we hope Dr. Smiley will publish an updated paper sharing the results soon.

The Christian Science Center, on Huntington Ave between Mass Ave and Belvidere Street in Boston, is the oldest suspended pavement installation that we know of in the United States. These trees were planted in 1968, making them 45 years old. 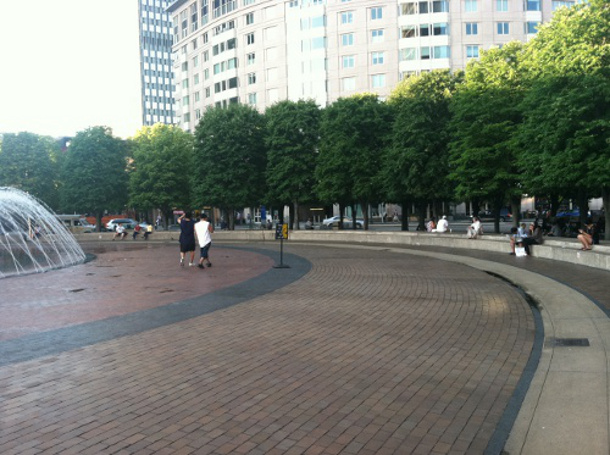 The trees growing in suspended pavement at the Christian Science Center are 45 years old! 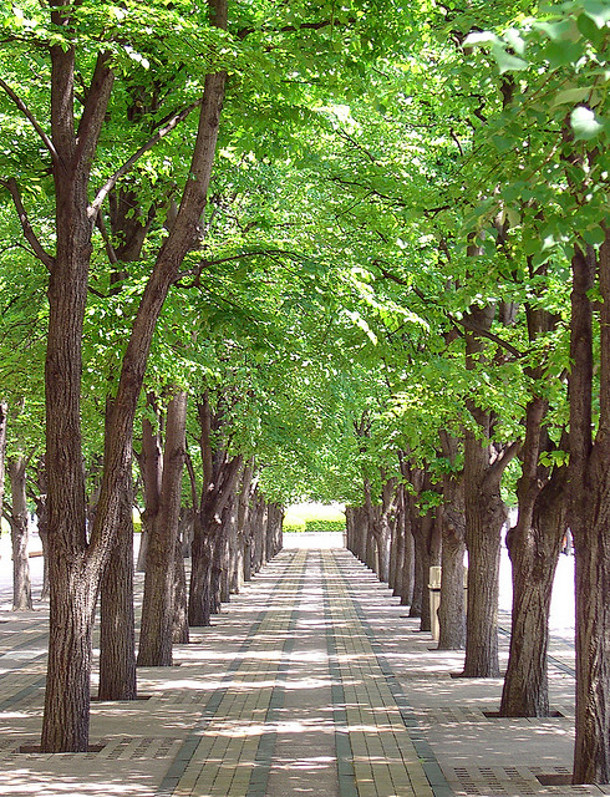 Sasaki & Associates designed this site to include the soil trenches, which are made up of structural slabs resting on grade beams over a garage roof. Each tree has access to around 800 cubic feet (22.6 cubic meters) of soil. In 2011 this plaza was designated with Landmark status by the Boston Landmark Commission. 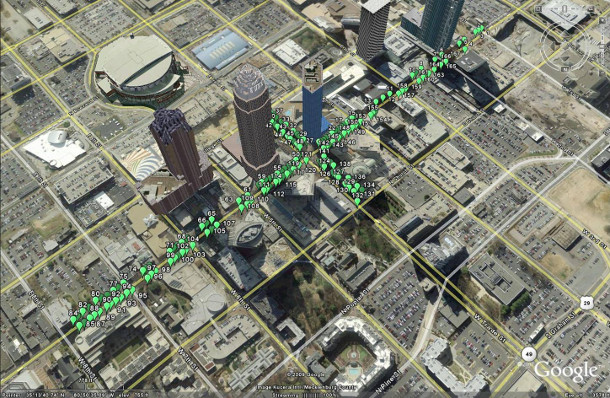 Almost 170 street trees were planted in 700 cubic feet of soil in a suspended pavement system. 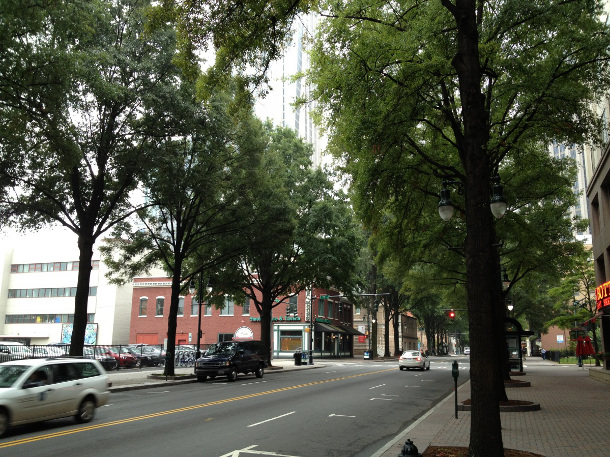 These trees planted in suspended pavement are now 28 years old… and huge.

The trees flourished. In 2009, while investigating some trees that weren’t doing so well, Tom Smiley with the Bartlett Tree Lab discovered that the contractor had actually only installed about 700 cubic feet (20 cubic meters) of soil per tree. However, since the tree pits connected along the length of a block with multiple trees in each pit, they had the benefit of sharing soil. Today, the Willow Oaks (Quercus phellos) have an average DBH of 16 inches (40.5 cm) and an average height of 44 feet (13.4 meters).

This is a Silva Cell project that was installed in 2009 in the heart of New York City. This grove of trees actually rests on an underground parking garage, making this a (secret) green roof! 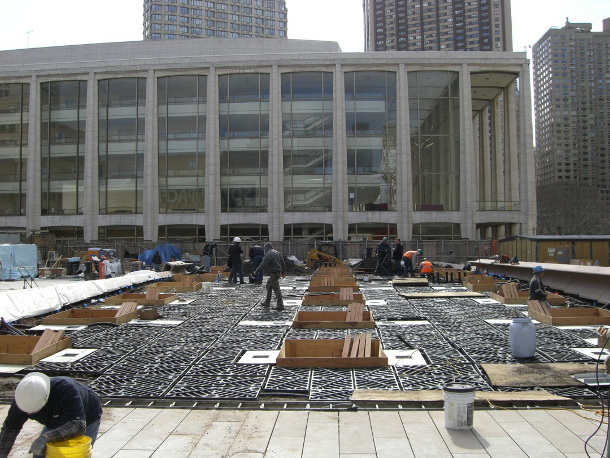 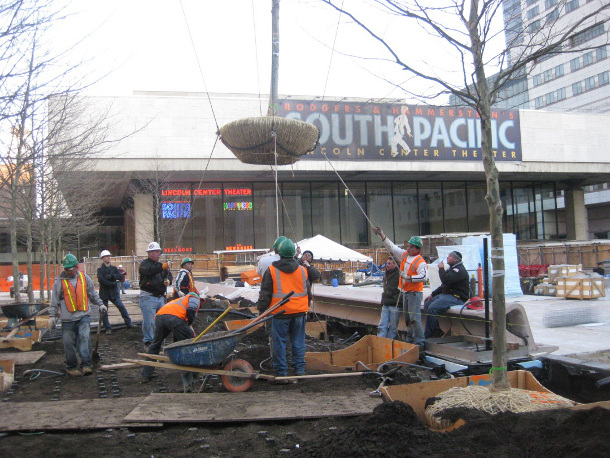 Trees were installed in the Silva Cells in Spring 2009 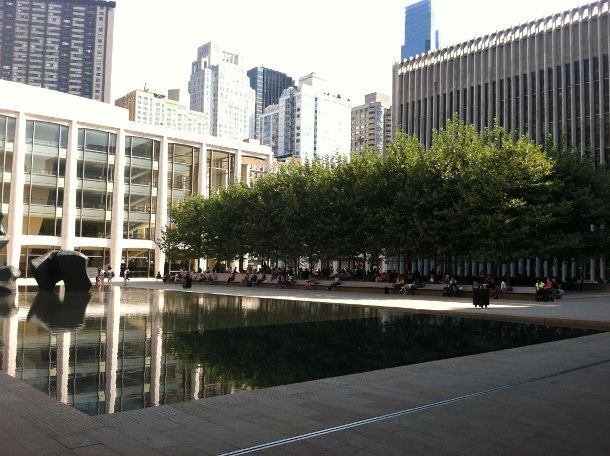 The trees planted in Silva Cells in summer 2012

In conclusion, there is ample evidence that suspended pavement is the best available tool for growing trees in paved environments. In Dr. Smiley’s words from his 2006 article, “The differences in tree growth among treatments was dramatic; trees growing in the noncompacted soil suspended pavement treatment are visually healthier in appearance and provide more shade more quickly than any of the other treatments.”

The trees from all of these projects – and this is only a handful – are a powerful example of how much soil it takes to grow a mature tree, and a reminder that with planning and commitment we can have trees like this in all of our cities.